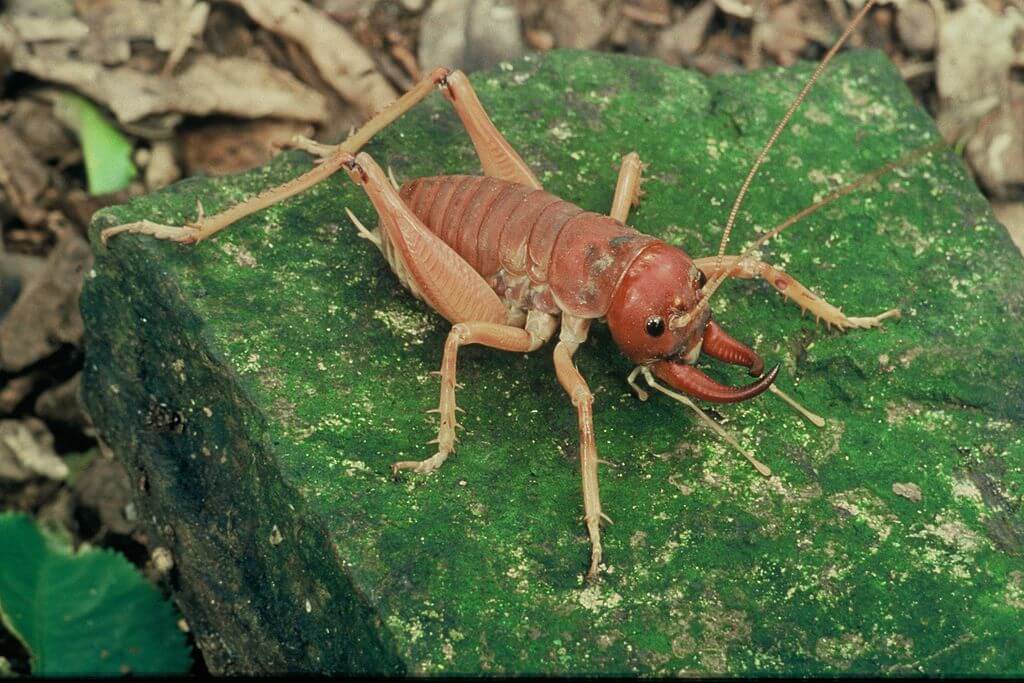 I always thought “The Dead Wetas” would be a really good heavy metal band name. (See below for a Heavy Metal Band Name Generator.) The Mountain Stone Weta, with its ability to come back from the dead, would be a good weta to be the emblem for a band with that name. However, the Tusked Weta has a similar ability that would make it a pretty good emblem too.

The Tusked Weta can hide underwater for up to ten minutes.

‘Tusked Weta vs Foraging Pig’ is the sixth is a series of short videos from BBC Earth. I did posts on the first four (see below) and put the fifth on the Heather’s Homilies Facebook page. A wild boar is the most dangerous thing you’r ever likely to find in the wild in New Zealand if you’re human. However, they’re more likely to hide from you or run away than attack.

As always, the details are beyond me in this sort of post, so I’m resorting to Wikipedia. 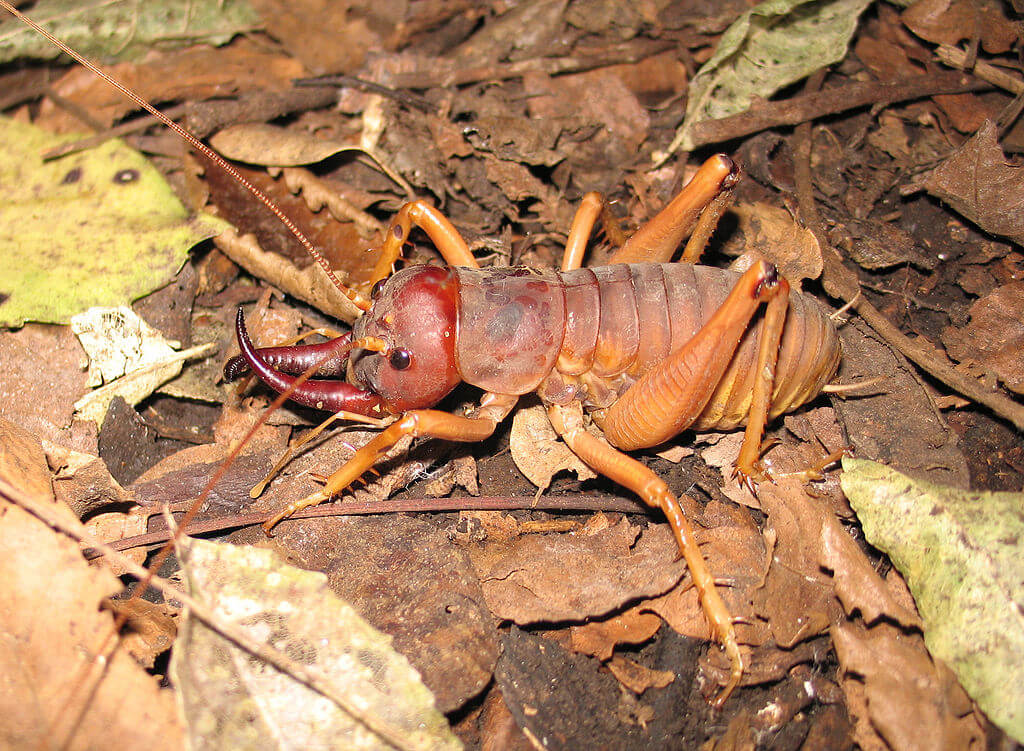 M. isolata is the largest tusked wētā, 90 mm long. Captive males can weigh 28 g and females 37 g, though wild specimens are generally smaller: 23 and 25 g. Adult males have long brown tusks curving from their mandibles, projecting far in front of their head; these vary significantly in size between males. They use these to spar with other males in territorial pushing contests, each trying to overturn the other. If disturbed, they will raise their forelegs, hiss, and gnash their jaws; they stridulate by rubbing their femurs against their abdomen, and males can make a rasping noise by rubbing their tusks together. Both sexes will also defecate foul-smelling liquid faeces. Despite these displays, they rarely bite when handled.

Eggs are laid in the soil and take anywhere from three to nine months to hatch. From hatching to adulthood takes 16–17 months, and adults live for 6–10 months after their final moult. 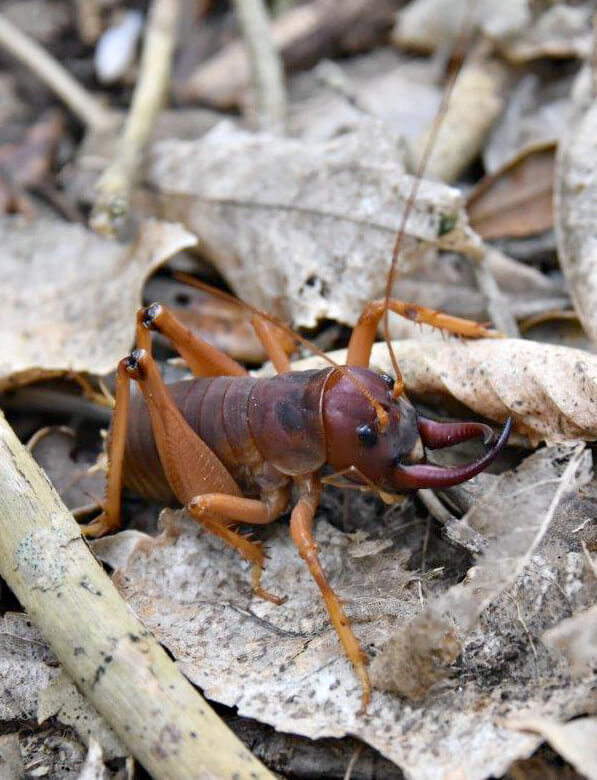 Mercury Islands tusked wētā are nocturnal, hiding underground during the day. They dig a burrow and underground chamber, plaster and smooth the walls with saliva, back in, and seal the entrance with a plug made of soil and saliva. They are reluctant to emerge, coming out during the darkest nights when it is warm and moist and there is little moonlight. This seems to be a strategy for avoiding tuatara and the numerous lizards on the forest floor: M. isolata translocated to islands with fewer predators are more willing to emerge at night. M. isolata is largely carnivorous, feeding on invertebrates in the leaf litter, but will also eat plant material in captivity.

A quick explanation. The Māori language has fourteen letters:

Five of these are vowels, which are the same as in English, though the pronunciation is different:

However, each vowel can be long or short. In recent years, some people have begun to put the macron over long vowels to aid in pronunciation. Others don’t bother. I don’t know what the official position is. Anyway, that means you’ll sometimes see macrons in Maori, or Māori, words.

The person who did the Tusked Wētā entry in Wikipedia is obviously someone who uses the macrons.

Here are the other posts about endemic New Zealand species that BBC Earth has put out short films about.

A fifth film from BBC Earth about New Zealand they put out recently:

So what do you get in the Heavy Metal Band Name Generator that’s doing the social media round? I get Satan’s Death. Not bad. However as an atheist, Satan is not only dead, he never existed. 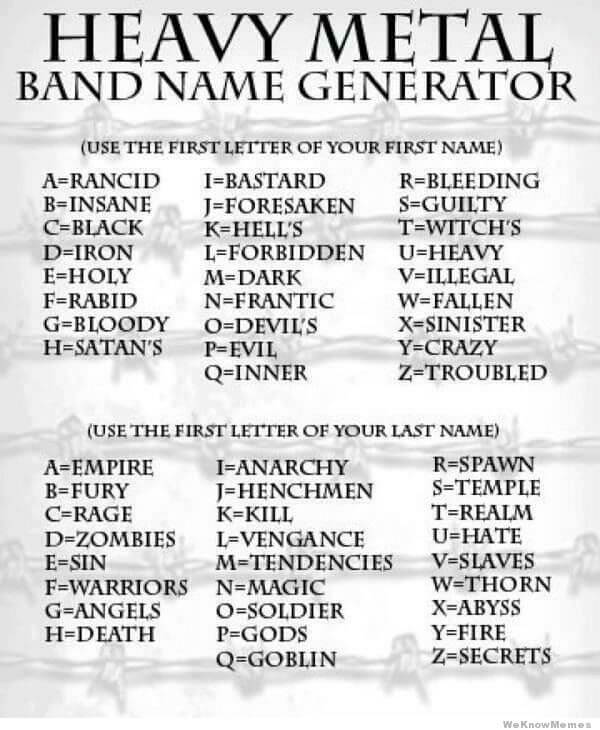