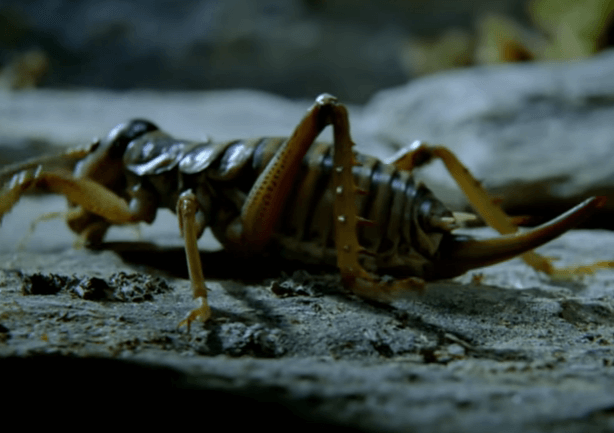 The Mountain Stone Weta is the subject of the fourth release in a row from BBC Earth relating to New Zealand. They’re on quite a roll when it comes to short clips about my country, which I’m loving of course.

There are more than seventy species of weta in New Zealand, some more common than others. According to Wikipedia, they belong to the families Anostostomatidae and Rhaphidophoridae, though that means nothing to me!

Personally I’ve never come across the mountain stone weta. However, I tend to avoid the cold places that they’ve evolved to inhabit. They mainly live in the Southern Alps, which is the mountain range down the centre of the South Island.

As a non-scientist, I’m going to leave it to Wikipedia to do most of the explaining: 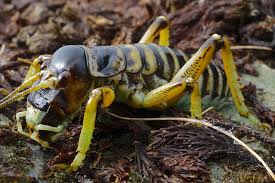 Many weta are large by insect standards and some species are among the largest and heaviest in the world. Their physical appearance is like a katydid, long-horned grasshopper, or cricket … [However,] the hind legs are enlarged and usually very spiny. …

They are nocturnal, and all New Zealand species are flightless. …

Most weta are predators or omnivores preying on other invertebrates …

Weta can bite with powerful mandibles. Tree weta bites are painful but not particularly common. Weta can inflict painful scratches, with the potential of infection …

Their defence displays consist of looking large and spiky, and they will retreat if given a chance. Tree weta arc their hind legs into the air in warning to foes… [T]hen [they] strike downwards, so the spines could scratch the eyes of a predator. Pegs or ridges at the base of the abdomen are struck by a patch of fine pegs at the base (inner surface) of the legs … [T]his action makes a distinctive sound.

The amazing thing about the mountain stone weta is that it has special proteins that stop ice crystals forming in its cells. Wikipedia has this to say:

Mountain stone weta can survive being frozen for months in a state of suspended animation down to temperatures of about -10 °C. At temperatures below -10 °C approximately 85% of their body water … crystallise[s], which is one of the highest ice contents known for any animal. During winter their haemolymph (the insect equivalent of blood) contains low molecular weight cryoprotectants such as amino acids especially proline (up to about 100 mM) and the disaccharide trehalose. These substances are synthesized during autumn and their concentration decreases again during spring and summer (Proline concentration decreases to about 10 mM during summer). The amino acids and sugars presumably help to decrease the ice content colligatively. However, they probably also have a direct protective effect on membranes and proteins via direct interaction or by modifying the water layer with the closest proximity to the molecules.

Note on the Weta Name

Weta is a Māori word. There is no letter “s” in Māori. All nouns are both singular and plural.

Here are the other posts about endemic New Zealand species that BBC Earth has put out short films about.