I subscribe to BBC Earth on YouTube, which never disappoints in its offerings. Today the selection was especially exciting – video of hatching tuatara from inside the burrow. Tuatara, of course, can only be found in New Zealand, and are the last living dinosaur.

(Note: There is no “s” in Maori. All nouns are both singular and plural.)

I saw an adult tuatara in real life about ten years ago. I was walking through the Otorohanga Kiwi Park when it suddenly ran from its burrow quite close to me (about 2 metres). It saw me at the same time as I saw it. It froze, as they do in such circumstances, so I was able to take several pictures and watch it for some time. Then my nephew came running along to see what had happened to me, and the tuatara took the opportunity to scurry off.

Unfortunately, the pictures I took then are on my other computer. The local repair guy has had the computer for some time to do a really simple job, and I’ve already had to return it once. I sent this one out of town (PB Tech in Hamilton) for a fix and had it back as good as new within five days! Guess who’s getting the work in the future.

So, instead here’s a pic from Wikipedia: 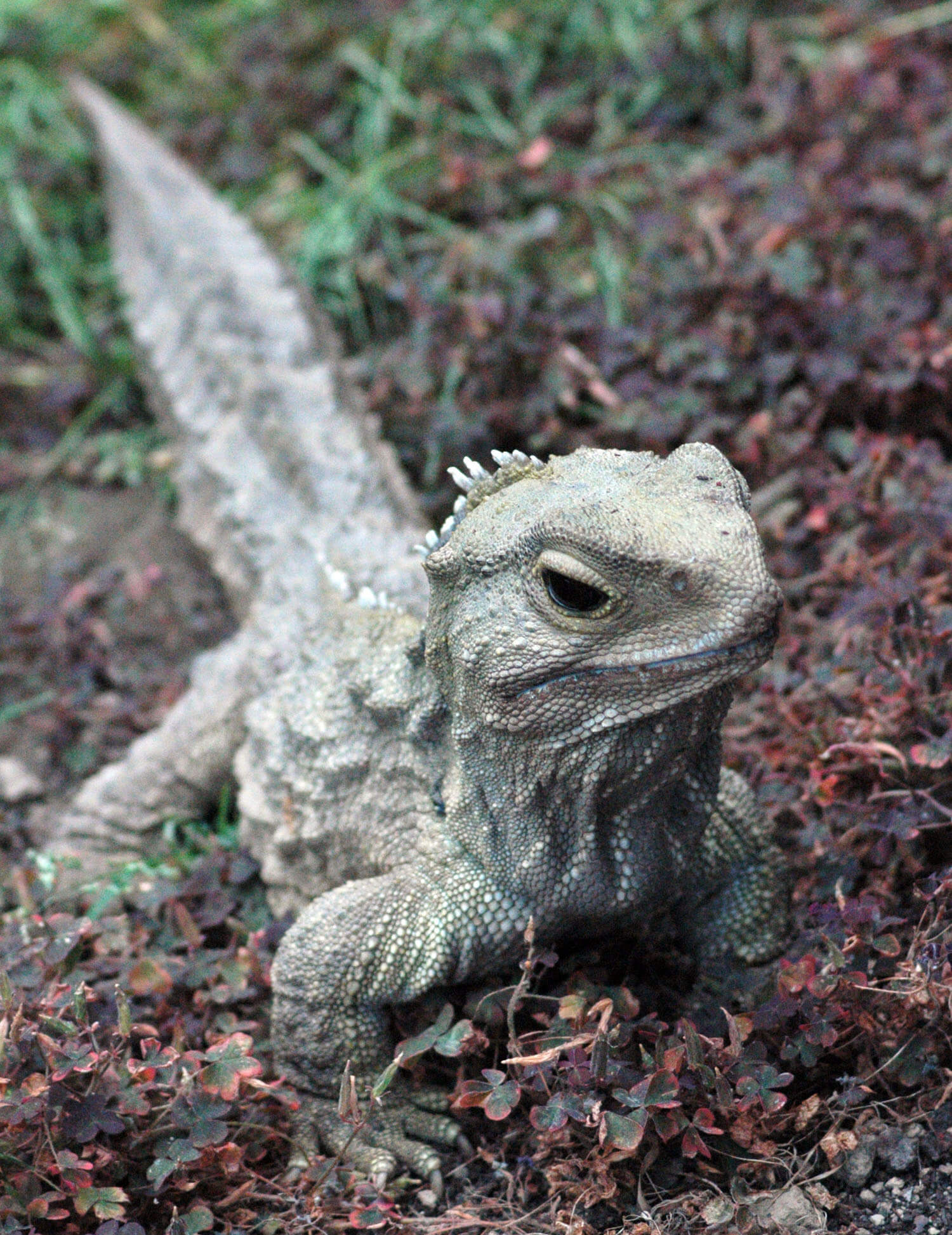 This is Henry, who lives at the Southland Museum and Art Gallery in Invercargill. (Wikipedia Commons. Click pic to go to source.)

Here’s what Wikipedia has to say about tuatara reproduction:

Tuatara reproduce very slowly, taking 10 to 20 years to reach sexual maturity. Mating occurs in midsummer; females mate and lay eggs once every four years. During courtship, a male makes his skin darker, raises his crests, and parades toward the female. He slowly walks in circles around the female with stiffened legs. The female will either submit, and allow the male to mount her, or retreat to her burrow. Males do not have a penis; they reproduce by the male lifting the tail of the female and placing his vent over hers. The sperm is then transferred into the female, much like the mating process in birds.

Tuatara eggs have a soft, parchment-like shell. It takes the females between one and three years to provide eggs with yolk, and up to seven months to form the shell. It then takes between 12 and 15 months from copulation to hatching. This means reproduction occurs at two- to five-year intervals, the slowest in any reptile. Wild tuatara are known to be still reproducing at about 60 years of age; “Henry” [see pic above], a male tuatara at Southland Museum in Invercargill, New Zealand, became a father (possibly for the first time) on 23 January 2009, at the age of 111.

The sex of a hatchling depends on the temperature of the egg, with warmer eggs tending to produce male tuatara, and cooler eggs producing females. Eggs incubated at 21 °C (70 °F) have an equal chance of being male or female. However, at 22 °C (72 °F), 80% are likely to be males, and at 20 °C (68 °F), 80% are likely to be females; at 18 °C (64 °F) all hatchlings will be females. Some evidence indicates sex determination in tuatara is determined by both genetic and environmental factors.

Tuatara probably have the slowest growth rates of any reptile, continuing to grow larger for the first 35 years of their lives. The average lifespan is about 60 years, but they can live to be well over 100 years old. … Some experts believe that captive tuatara could live as long as 200 years.

As well as the Wikipedia article, there’s some excellent info and great pics at the Tuatara page on the New Zealand Department of Conservation website. The top of the page on that website shows a tuatara chomping down on an unlucky weta!