Mike Bloomberg and is “Stop and Frisk” Racist? 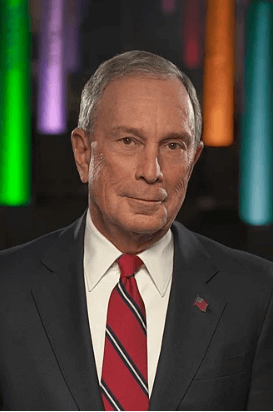 With the entry of former New York Mayor Mike Bloomberg into the race to be the Democratic Party presidential nominee, we have the inevitable. The other runners, and their supporters, are digging into his past to find any dirt they can to discredit him. The primary attack against him is the New York police’s use of the tactic “Stop and Frisk” when he was mayor. Basically, it meant that the police could stop anyone, any time, and frisk them for weapons. The searches were mainly for guns, but other things like knives and drugs were in their remit.

The major increase in the use of “Stop and Frisk” during the Bloomberg administration was successful in its goals. It was seen as a major contribution to the murder rate going down by more than half. However, it was not popular. Many saw it as racist as the majority suffering from the policy were people of colour.

Former Mayor Bloomberg is undergoing attacks for speaking in favour of “Stop and Frisk” as recently as last year. His support for the policy is changing now that he’s a candidate to be the Democratic Party presidential nominee. He’s publicly walking back that support and saying he was wrong to support a racist policy. I can understand why he’s doing that, but personally I don’t think it was a racist policy. (I’ll get to why not.)

ABC News reports Bloomberg as saying at a weekend rally in Richmond, Virginia:

“I’ve gotten a lot of grief for it lately, but I defended it for too long,” Bloomberg said of the policy, which he utilized during his long tenure as New York City mayor. “And because I didn’t fully understand the unintentional pain it caused young black and brown kids and their families, I should have acted sooner and I should have stopped it, and I didn’t, and I apologize for that.”

A Correction to the History of “Stop and Frisk”

Senator Bernie Sanders in particular, though he’s not the only one, is calling “Stop and Frisk”, “Bloomberg’s policy”. It’s not. It’s been around for, at least, decades, and not just in New York.

Back as 1968 the courts upheld the right of the police to use the tactic. In other places it’s known as the “Terry Stop” because of that court case: Terry v. Ohio. The result of that case is that police in the US have the right to search someone for weapons, without a search warrant, if they think they’re dangerous.

Bloomberg did increase it’s use in an effort to drive down gun crime. 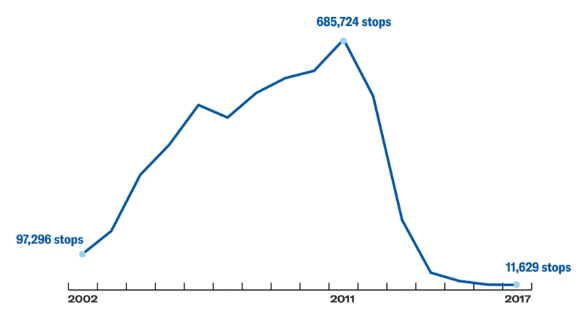 Sanders also says the current mayor, Bill de Blasio, has stopped the policy. He has not. It continues, albeit at a reduced rate.

Why is “Stop and Frisk” Seen as Racist?

The New York chapter of the American Civil Liberties Union (ACLU) analyses “Stop and Frisk” data annually. Their 2019 summary of their overall findings is:

An analysis by the NYCLU [New York Civil Liberties Union] revealed that innocent New Yorkers have been subjected to police stops and street interrogations more than 5 million times since 2002, and that Black and Latinx communities continue to be the overwhelming target of these tactics. At the height of stop-and-frisk in 2011 under the Bloomberg administration, over 685,000 people were stopped. Nearly [ACLU emphasis] nine out of 10 stopped-and-frisked New Yorkers have been completely innocent.

The fact that so many innocent people are suffering is a good reason for the ACLU to be asking for a review of this policy. However, the fact that it is mainly people of colour does not necessarily mean the policy itself is racist.

The analysis shows that the number of white people undergoing searches per annum was between 8% and 12%. Over 74% of the searches were of African American and Latino American people. Those demographics make up about 54% of the population. It’s easy to see why “Stop and Frisk” got the reputation as being racist. I don’t think it’s that simple though.

Why I Don’t Think “Stop and Frisk” is Racist

“Stop and Frisk” was naturally used most often in the low income neighbourhoods of New York because they have the highest crime rates. Those neighbourhoods have much higher African American and Latino American populations than New York as a whole.

The fact that most African Americans and Latino Americans live in low income neighbourhoods is because of racism. That is disgusting and needs fixing. Doing that will take time and multiple approaches. It does not mean a policy designed to reduce crime in those areas is also racist. That judgment can only be made by looking at the motives of the person who came up with the policy in the first place, and those who thought it was a good idea.

On the one hand, they may see these groups as a lawless bunch who are screwing up the city for nice white people and to “throw them against a wall and frisk them” is the only way to handle them. (Quote comes from a recent leaking of a recording of Bloomberg in 2015.)

On the other hand, they may want the mostly young (14-25) men of colour who are committing crimes to get a chance . The motive may be to make those neighbourhoods better and safer places to live. That will improve all sorts of things for everyone living in them.

One improvement would be safer schools where more children get a better education and therefore a better chance for their future.

Having said that, I’ve no doubt there are (and were) racist police officers who take advantage of the policy to attack people of colour. The NYPD should make a point of ensuring this isn’t happening, and getting rid of any officers found to be racially profiling citizens.

The GOP is Sticking the Boot in too

On CNN on Sunday morning (US time) a senior staff member of VP Mike Pence got in on the action too. The Pence staff member was saying “Stop and Frisk” was a good policy when Giuliani did it, but Bloomberg’s escalation of the policy was bad.

However, that makes little sense. Proportionally, the number of people of colour suffering was the same during Giuliani’s mayoralty as during that of Bloomberg. As noted above, it’s true there was an increase in actual numbers. However, this was for a reason, and it made a difference. New York became a safer place.

There’s no doubt in my opinion that the police should have done a better job at identifying who to stop. There were too many innocent people caught up in the sweep. Again though, the proportion of innocent people was the same during Bloomberg’s administration as that of Giuliani.

Yesterday CNN had three Town Hall events for Democratic Party candidates, including one for Bernie Sanders. (The other three top candidates are today.) I have to say I lost any respect I have left for him.

When asked to condemn the so-called “Bernie Bros” who have got a name for attacking opponents of his online, that condemnation was weak. He got into whataboutery, pointing out that his campaign was also receiving attacks. His main point was that the other campaigns should be doing the same.

His attacks on Mike Bloomberg has the look of the spiteful pettiness that usually only comes from Trump. (Since I wrote that, I’ve found out that I’m not the only person saying that. However, I don’t want to delay posting this in order to discuss the point. We can get to it in the comments.)

As noted above, Sanders comments about Bloomberg regarding “Stop and Frisk” were outright lies. He frequently spat out the word “billionaire” when describing him as if it was something dirty and disgusting. His reaction to Anderson Cooper pointing out that Bloomberg would be beholden to no one else because he was using his own money was one of annoyance.

All the Democratic Party candidates have pledged to help whoever becomes the nominee. However, when Sanders was asked by Anderson Cooper whether he would accept money from Bloomberg, be wouldn’t admit that he would.

Sanders was also extremely worked up about the fact that so far, Bloomberg has been buying the election. That’s true. Using his fortune, Bloomberg has been flooding the states where primaries are coming up with advertising. Because he has the money, he’s been able to spend more than all the other candidates put together. As a result, he’s doing well in the polls and will be on the next debate stage.

So far, most voters only know about Bloomberg through his naturally favourable advertisements. That will change in the debate when he has to stand up to questioning about his record. Apparently he’s not a good debater, so that may be his downfall.

Recently, Mike Bloomberg appears to be taking a lot of the African American vote from Biden. Biden was by far the most popular candidate among Blacks initially. However, his poor showing in the elections so far means Blacks are looking for someone else to give their vote to. African Americans want Trump out of the White House more than any other demographic, and they appear to see Bloomberg as the best choice now.

They could be right. In my opinion, Sanders would be a disastrous choice for the Democratic Party. I think he would scare enough voters to either stay home or vote for Trump. Then, the US would be facing the horror of four more years of Trump. Elizabeth Warren wouldn’t be much better. She’s seen by many as too weak to stand up to Trump on the debate stage as well as being too far left.

The more I see of Pete Buttigieg, the more he impresses me. However, I suspect African Americans recognize that a lot of Evangelical Christians, who make up a large part of the electorate, aren’t ready for a gay president. That could change between now and November though as they see more of him and realize that gay people are just like everybody else.

Amy Klobuchar is my personal pick of the remaining candidates. Her lack of name recognition is proving problematic for her though. Although starting from the same level as Buttigieg in that regard, many seem to find him more exciting.

It will be interesting to see how things stand at the end of March.