As I wrote about here, I unreservedly support the International Coalition Against Blasphemy Laws campaign to end blasphemy laws launched on 30 January 2015. The list of organisations included in the coalition is constantly growing and can be seen here. The Humanist Society of New Zealand and the New Zealand Association of Rationalists and Humanists are founding partners, as are IHEU (International Humanist Ethical Union), AAI (Atheist Alliance International), and the European Humanist Federation along with national organisations from dozens of other countries.

Please consider adding your name to the ICABL’s campaign action list to show your support for promoting freedom of speech and ridding the world of laws that limit it. 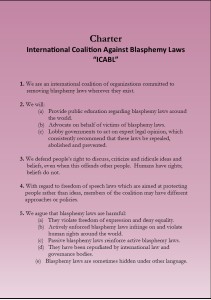