I wrote about the need to repeal New Zealand’s blasphemy law back in January, ending my post with the words, “Not only should we repeal our blasphemy law, New Zealand should become part of a call of all free nations to see them repealed worldwide.” I wasn’t the only one who felt that way. New Zealand’s atheist and humanist organisations renewed their call for New Zealand’s blasphemy law to be repealed following the Charlie Hebdo massacre. Similar groups in other countries had similar responses, and those groups quickly got together to make the effort trans-national. Their efforts have already borne fruit.

Our campaign does not target laws against incitement to hatred, which are legitimate. What we are concerned about is laws which restrict freedom of expression about religion. As a first step, we want to see the remaining laws against blasphemy and religious insult in Europe repealed. There is an obvious double standard issue as the EU has taken a clear stand against blasphemy laws in the world. Now it must encourage its Members’ States to abolish existing blasphemy laws, as recommended by the Council of Europe.

That “first step” also includes the blasphemy laws of New Zealand and Canada.

The coalition’s definition of blasphemy includes laws that “… criminalize … insult to religion, hurting religious sentiment, or any laws … which similarly restrict questions, criticism, or ridicule of religion or religious concepts”. The purpose of such laws is a limit to free speech, which is the fundamental to democracy. As Sam Harris said to Ben Affleck during his now infamous appearance on Bill Maher’s Real Time, “We have to be able to question bad ideas.” Of course, it’s not just bad ideas; we have to question ALL ideas. It is only by open dialogue and free expression that we can work out what are the best ideas and move society forward. 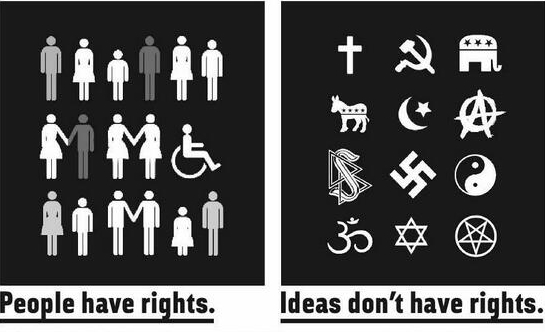 There are 61 countries, including New Zealand, that still consider blasphemy a crime. In some of them the punishment for that crime is death, and that sentence is carried out regularly. Just imagine that – murder is considered the appropriate response, by the government, for freedom of thought and expression in relation to the dominant religion of the country. In New Zealand, it is possible to be imprisoned for up to two years for bad-mouthing Christianity.

Our organizations have worked for many years to protect this important right: to question, criticise, and yes even ridicule religion. Given this new impetus to challenge these anachronistic laws, we believe that we can work together across national boundaries to support local voices calling for the repeal of all such laws.

“The idea that it is wrong to satirize religion, lends false legitimacy to those who murder in the name of being offended. The idea that it is taboo to question or to criticise religious authorities is one reason why sexual abuse in the Catholic Church persisted so long. The idea that “insult” to religion is a crime, is why humanists like Asif Mohiuddin are jailed in Bangladesh, is why secularists like Raif Badawi are being lashed in Saudi Arabia, is why atheists and religious minorities are persecuted in places like Afghanistan, Egypt, Pakistan, Iran, Sudan, and the list goes on!

Some will say, “Why bother, no-one’s ever been convicted in New Zealand, there are more important things to focus on.” In my opinion, those people are wrong. There are several reasons this law needs to be repealed as soon as possible:

1. When New Zealand speaks on the international stage, we rely a great deal on our integrity. A look at our track record at the United Nations shows we walk the talk – we are respected in such fora for good reason. However, it is difficult for us to complain about the blasphemy laws of other countries when we retain such a law ourselves – there is a taint of hypocrisy there.

2. As long as the law is there it can be used. We do not have a constitution that guarantees us freedom of speech such as that enshrined in the US Constitution. Our right to free speech is in the New Zealand Bill of Rights Act (1990) and laws can be overturned. We cannot rely on the fact that we have always had reasonable and stable government in New Zealand.

3. There is an obvious conflict between our blasphemy law and the Bill of Rights. Such a conflict should be resolved before it is tested, which would certainly cost a lot more than doing the work beforehand. To an extent it was tested in the infamous 1998 Virgin in a Condom case, which came down on the side of free speech, establishing a precedent.

4. A blasphemy law gives religious speech a protection beyond other speech and specifically discriminates against those of us who are not religious. One of the pieces of evidence against Saudi Arabian blogger and Raif Badawi (see below) was that he’d clicked the ‘Like’ button on an Arabian Christian Facebook page. This was seen by prosecutors as an insult by Badawi to Islam. (Badawi retains his Muslim faith.) This kind of action leads to friction between people of different religions and no religion as it discourages friendship between them.

5. New Zealand is a signatory to international human rights legislation (as are most of the other countries that retain blasphemy laws). A blasphemy law is obviously incompatible with such legislation.

6. Blasphemy laws are subjective, which simply makes them bad laws. The fact that there is extremely wide opinion about what is and what is not blasphemous even within people of different sects of the same religion makes it extremely difficult to use the law. In the Virgin in a Condom case, the Roman Catholic Church was only calling for art to be removed from a museum, and they received widespread support from many who did not find the art offensive, but sympathized with the Church. However, if the Church had been calling for imprisonment, I guarantee that their support, even within their own ranks, would have fallen away.

7. Blasphemy laws legitimize the victimization of minorities. If the government can prosecute someone for disagreeing with the majority, it leads to the possibility that others with similar opinions will be persecuted in some way.

8. Worst of all, blasphemy laws silence dissent. Like any silencing of free speech this leads to various forms of corruption and abuse of power.

I’m sure you can come up with several more reasons why blasphemy laws are a bad idea, and I hope you share them in the comments below. 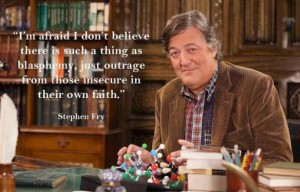 People only consider blasphemy should be a thing because they’ve been brought up in a society in which religious beliefs have a special place ahead of other ideas. The idea always originates with the dominant majority who are trying to protect their religion from scrutiny. If any belief system was valid, it wouldn’t require legal protection.

They also expressed the difficulty of defining what is and isn’t blasphemy, and the application of such laws:

Indeed, the difficulties in providing an objective definition of the term “defamation of religions” at the international level make the whole concept open to abuse. At the national level, domestic blasphemy laws can prove counter-productive, since this could result in the de facto censure of all inter-religious and intra-religious criticism. Many of these laws afford different levels of protection to different religions and have often proved to be applied in a discriminatory manner. There are numerous examples of persecution of religious minorities or dissenters, but also of atheists and non-theists, as a result of legislation on religious offences or overzealous application of laws that are fairly neutral.

Reporters Without Borders tally at 6 February 2015.

Reporters Without Borders advise there have already been thirteen journalists killed in 2015 including, of course, eight in France in the Charlie Hebdo massacre. The other five were all murdered in South Sudan on 25 January in an ambush. (Free Press Watch says at this stage it is unknown whether the attack was carried out by Joseph Kony’s Lord’s Resistance Army or South Sudanese rebels.) In addition 165 journalists and 178 netizens are currently in prison. Until a couple of days ago the total of journalists had included Australian Peter Greste, who arrived home yesterday after 400 days in prison in Egypt. 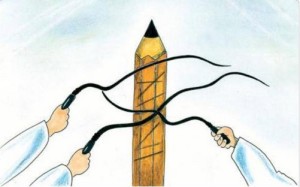 Among the netizens still imprisoned is Saudi Arabian blogger Raif Badawi. Last year Badawi was sentenced to 1,000 lashes, ten years imprisonment and a fine of 1 million riyals (approximately NZ$360,000; US$266,000). His crime? Insulting Islam. How did he do that? He co-founded a website called “Saudi Liberal Network” that questioned and discussed government policies such as the one that forbids women to drive. As the government uses a strict form of Sharia, this was interpreted as an insult to Islam. On the 9th January, Badawi received the first fifty lashes of the 1,000 he was sentenced to, which were to be carried out weekly, in public, after Friday prayers, in front of Jeddah’s Jaffali mosque. The lashing has been widely condemned, including by Amnesty International. The same day, in an outrageous display of hypocrisy, the Saudi ambassador to France, Mohammed Ismail Al-Sheikh, walked in the Unity March in Paris that followed the Charlie Hebdo massacre. Badawi was supposed to receive fifty lashes at the same time each Friday, but they have been postponed since, allegedly because Badawi’s is insufficiently recovered from the first beating. My suspicion is that international pressure is such that Saudi Arabia feels unable to carry out the sentence. I hope I am correct.

And for your entertainment, here’s the always worth listening to Richard Dawkins reminding us that blasphemy is a victimless crime.

The list of countries that still retain these outdated laws is long (61 countries), but they are in the minority:

*UN joint statement entitled Freedom of expression and incitement to racial or religious hatred by:

– Mr. Frank La Rue, Special Rapporteur on the promotion and protection of the right to freedom of opinion and expression.