Why Donald Trump Won’t Be President

The Democratic and Republican parties now both have presumptive nominees and the Libertarian party has confirmed that their nominee is former governor of New Mexico, Gary Johnson (Johnson was also the Libertarian nominee in 2012). Despite having less than 40% name recognition Johnson has been getting as much as 11% of the vote since he became the nominee. I suspect this has little to do with him and a lot to do with the unpopularity of the presumptive nominees of the two main parties – Hillary Clinton and Donald Trump. Both have historically high unfavourability ratings and many voters will vote for anyone else without even knowing anything about him. I saw an interview with Johnson yesterday and wasn’t impressed. About the best thing he said was that he’d stopped smoking marijuana five weeks ago and wouldn’t smoke it as president because he didn’t think the American people would like him answering the red phone stoned.

So the race for the presidency is between Clinton and Trump. Although Trump has closed the gap between them in the latest polls to within the margin of error, there’s little to no chance of him winning the White House, and below is my analysis of why I think that. (I’d also be interested to see how the new polls now that Clinton is the confirmed nominee and after the latest exposé of Trump’s seriously wanting character. I suspect she will have increased the gap between them again.)

Overall Trend in voting since 1 January 2016 via Real Clear Politics: 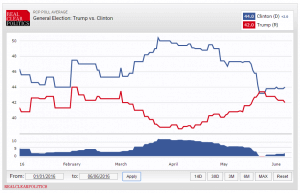 The Women’s Vote
Clinton has a huge advantage over Trump with women. He has made multiple distasteful comments relating to women during his campaign which at the very least show a lack of respect for women. (I detailed some of them here.) Women vote in greater numbers than men – in 2012 53% of voters were women, and 55% of them voted for the Democratic Party. (44% of women voted for the Republican Party and 1% voted for other candidates.) In the latest Quinnipiac University poll, 54% of women said they would vote Democrat while only 30% supported the GOP. Trump thinks he can make up the numbers with men, but polls consistently show that while he does do better than Clinton with men, it is not by enough to cancel out her advantage with women. The same Quinnipiac poll had men voting 51% Republican and 35% Democratic.

When Trump was contemplating a debate with Bernie Sanders last week, he eventually pulled out citing the fact that Sanders wasn’t going to win as his reason. I don’t believe this. Trump is a publicity-monger and wouldn’t care about that as long as he thought the exposure would benefit him. I believe the real reason was that he couldn’t find a suitable charity. Knowing he has to find a way to appeal to more women if he ever wants to win the election, Trump suggested a multi-million donation to women’s charities if the debate went ahead. Talks were proceeding on that basis – I heard Bret Baier of Fox News’s Special Report say so on air on at least two separate occasions.

I suspect the real problem was three-fold:
1. He couldn’t identify a charity that had majority support, especially amongst women, that wasn’t also pro-choice;
2. He couldn’t donate to a women’s charity without bringing attention to all the anti-women comments he’s made in the campaign so far;
3. He couldn’t avoid accusations of attempting to buy the female vote. The fact that he’d already used the same tactic with veterans with mixed results when he petulantly refused to debate if Megyn Kelly was a moderator show it to be a way he thinks he can solve problems – throw money at it like a medieval king distributing largesse and expecting the recipients to be suitably grateful.

The Latino Vote
The last time a Republican won the White House was George W Bush in 2004. At that time Latinos made up 10% of the voters and Bush attracted the votes of 44% of them. They were a bloc seen as essential to his success. In 2008, McCain managed to get 31% of the Latino vote for the Republicans, and in 2012 Romney only managed 27%.

In November 2016, Latinos will make up 12% of voters and so they’re even more important to any candidate. Trump though, has gone out of his way to offend them. His immigration policy includes sending USian children from the country if their parents aren’t legal citizens, something that will affect more Latino-Americans than any other group. The likelihood that he’ll be targeting British illegal immigrants is not one anyone is worried about. The latest ABC/Wall Street Journal poll has Trump receiving only 20% of the Latino vote while 68% say they will vote for Clinton.

Trump’s difficulty with Latino voters is not only a problem overall, it is a problem in the electoral college. In 2004 the states of Colorado, Florida, Nevada, New Mexico, and Virginia went to George W Bush. In 2008 and 2012 they were all won by the Democratic Party largely due to the extremely large Latino vote for the Democrats in all five states: Colorado (75%), Florida (60%), Nevada (71%), New Mexico (65%), Virginia (64%). At least two of those, Florida and Virginia, are amongst the fifteen that Trump plans to focus on in order to win the election – a strategy that has many in the GOP scratching their heads. They consider trying to flip California and New York, for example, a waste of time and money, and I have to agree with them. 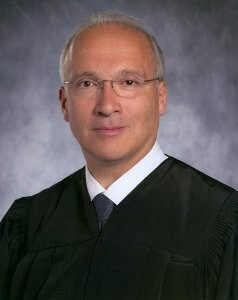 Trump’s animus to immigrants of colour has been highlighted with his attacks on Judge Gonzalo Curiel in the Trump University class action suit. They have been entirely focused on the judge’s Mexican ancestry despite him being Indiana-born to legal immigrants. Other supposed proofs of the judge’s unfairness have only been brought up after the racial attack as cover.

Let’s be clear: Trump has every right to suggest the judge might be biased and should recuse himself. However, if there was any basis for this his lawyers would have done something about it long ago. The fact they haven’t suggests there is nothing in Trump’s allegations. Trump is using his public position as presumptive nominee to try and create an illusion of conflict of interest to at least delay this court case. At the moment there is a slim chance that the very strong case against Trump could come to court before the election in November. If the judge was forced by public pressure to recuse himself, there’s no chance the case will come up before the election.

The Republican party establishment are sticking by their man though:

The reasons for this are, I think, obvious. They don’t like Trump, but there are three things supporting him gives them. Firstly, they believe that if they stick close to him they retain control of the Republican party and its policies. (I think they would not be able to control him they way they believe, which I wrote about here.) Trump’s positions, as far as they can be pinned down, are frequently different to the Republican platform. Secondly, their only path to personal power is with Trump. And thirdly and most importantly, they like the philosophies of the justices Trump says he will appoint. For example, the list Trump announced back in mid-May are all anti-choice, and Republicans have been doing everything they can to destroy a woman’s right to choose in the US ever since that right was first confirmed by the Supreme Court back in the 1970s.

The African-American Vote
Republicans have not been able to attract African-American voters in large numbers since the Civil Rights era. Donald Trump will not change that, especially with things like his “my African-American” comment a few days ago. The indications are too that Barack Obama, who achieved the biggest African-American vote ever (93%) for the Democratic party, will endorse Clinton in the next few days and begin campaigning for her. He can excite a crowd as easily as Trump, and in addition provide a coherent, consistent message for voters.

The White Vote
Republicans think that a counter to the advantage Democrats will have with minority voters is their advantage with white voters. Whites are still the biggest voting bloc. Romney tried to appeal to white voters as well to make up for his failure to perform with others and in fact won white voters hugely 59% to 39%. However, although statistics this far out aren’t very reliable, Trump is not doing as well with white voters as even Romney did. The latest ABC/Wall Street Journal poll has him achieving 52% of the white vote and Clinton 36%. Romeny lost the election – Trump is going to need much more of the white vote than Romney managed if he wants to win.

The Conservative Vote
Trump has stated that the party is called the, “Republican party, not the Conservative party,” and many of his policies just don’t sit well with conservatives, especially when it comes to economics and foreign policy. Trump is isolationist and xenophobic and many of his statements in these areas are not just incoherent, they’re dangerous. His opposition to free trade and the tactics he proposes to reduce the trade deficits the US has with some countries displays a complete ignorance of economics. His proposals to introduce huge punitive tariffs will only increase costs for US consumers and invite retaliatory taxes, which will make it harder for US exporters to sell their products. And as the US, despite what Trump seems to think, is still the wealthiest large nation, it will be the US and her people that suffer the most from his tactics, not the Chinese or anyone else.

Trump’s foreign policy needs a whole post on its own. Clinton’s speech on 2 June did a good job of exposing much that is wrong with it, as have several Republicans. He supports nuclear proliferation – he stated Japan and South Korea should have their own nuclear weapons to fight North Korea for example. After not knowing what the nuclear triad was in an early debate, he didn’t make the effort to find out and still didn’t know a couple of weeks later. He and Putin seem to have formed some sort of mutual admiration society. He has no understanding of the value or purpose of NATO. Although he’s stated he favours Brexit (a wrong stance in my opinion) he doesn’t even seem to know what it means or understand the issues. He fails to understand the value of foreign aid and other soft diplomacy. He thinks climate change is Chinese-invented conspiracy. And I’m just getting started.

A Trump presidency would literally put the world in danger. He is susceptible to flattery and can be controlled by it. He is vulnerable to manipulation and his reactions to so many things demonstrates that first and foremost his presidency wouldn’t be about what is best for country, but for him personally. Candidates for president do not ask their surrogates and supporters to make attacks on judges on their behalf in relation to their personal business.

Luckily, it is extremely unlikely Trump will ever be president. Currently there are significantly more electoral college votes that are reliably Democratic than Republican. In 2012 although President Obama only won 26 states to Mitt Romney’s 24, he won an electoral college college landslide – 332 votes to 206. Trump’s failure to appeal to a majority of almost any demographic group means the chances of a Trump win are extremely slim.