Auē Tēnei Wiki: The Dangerousness of The Donald 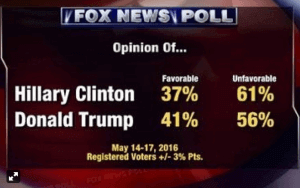 A new national poll came out from Fox News last week. Though it’s within the margin of error (+/- 4%), for the first time it shows Donald Trump beating Hillary Clinton in a head to head match up 45% to 42%. It also shows, again for the first time, that Clinton has a higher unfavourable and lower favourable rating than Trump.

This may be a result of the state of the primary race in their two parties. Trump has become the GOP’s presumptive nominee and the party is starting to rally around him. On the other hand, Sanders is continuing to act as if there’s a chance he could be the Democratic nominee and that is likely driving up Clinton’s unfavourables. At the time Obama became the Democratic Party nominee in 2008, 40% of Clinton’s followers said they would never vote for him. She worked hard to change that and soon had most of them enthusiastically supporting Obama. She is expecting Sanders to do the same for her. He has said he will, but in the meantime there are still many Democrats opposed to Clinton.

This poll makes the possibility that Trump will become US president slightly higher. A combination of demographics and the way the electoral college works means I still don’t think it likely but as I’ve said before, it would be very dangerous to consider Trump an easy-beat.

And Dangerous is the word that comes to mind most often when thinking about the possibility of a Trump presidency. Clinton calls him a “loose cannon,” but sometimes there’s a certain amount of slap-stick comedy people associate with that phrase and President Trump would have charge of the world’s biggest nuclear and conventional weapons arsenal. That is a genuinely dangerous proposition.

The New Yorker published an article by Adam Gopnik on Friday: The Dangerous Acceptance of Donald Trump. There’s that word again. Gopnik points out that out that despite their reservations, the GOP are falling into line behind Trump and thinking they’ll be able to control him. But that’s not going to happen:

Columnists and magazines that a month ago were saying #NeverTrump are now vibrating with the frisson of his audacity, fawning over him or at least thrilling to his rising poll numbers and telling one another, “We can control him.’

No, you can’t. One can argue about whether to call him a fascist or an authoritarian populist or a grotesque joke made in a nightmare shared between Philip K. Dick and Tom Wolfe, but under any label Trump is a declared enemy of the liberal constitutional order of the United States—the order that has made it, in fact, the great and plural country that it already is. He announces his enmity to America by word and action every day. It is articulated in his insistence on the rightness of torture and the acceptable murder of noncombatants. It is self-evident in the threats he makes daily to destroy his political enemies, made only worse by the frivolity and transience of the tone of those threats. He makes his enmity to American values clear when he suggests that the Presidency holds absolute power, through which he will be able to end opposition—whether by questioning the ownership of newspapers or talking about changing libel laws or threatening to take away F.C.C. licenses. To say “Well, he would not really have the power to accomplish that” is to misunderstand the nature of thin-skinned authoritarians in power. They do not arrive in office and discover, as constitutionalists do, that their capabilities are more limited than they imagined. They arrive, and then make their power as large as they can.

USians are constantly told, and many therefore believe, that they’re the greatest democracy in the history of the world. They think that their system of checks and balances can stop Trump from becoming the type of president many are warning about. But it won’t. In an analysis of New Zealand’s political system, Vox had this to say about the US system:

We in the US tend to assume that — however awful we might think our politicians are — our political system is excellent. The Constitution is held in high esteem across the political spectrum, and Democrats and Republicans alike pay lip service to the “genius” of the Founders. But our system, combining two powerful legislative bodies with a strong executive, is pretty rare internationally. Indeed, it appears to be a weaker model than most; the US is the just about the only country to sustain a presidential system for a long period without descending into dictatorship.

Republicans are constantly complaining about President Obama’s use of executive orders at the same time they’re thrilling at the idea of a President Trump taking control of Washington. They’re excited at the idea of him getting in there and creating a New Order with him in charge that destroys the current system. As Gopnik pointed out:

He’s not Hitler, as his wife recently said? Well, of course he isn’t. But then Hitler wasn’t Hitler—until he was. At each step of the way, the shock was tempered by acceptance. It depended on conservatives pretending he wasn’t so bad, compared with the Communists, while at the same time the militant left decided that their real enemies were the moderate leftists, who were really indistinguishable from the Nazis. The radical progressives decided that there was no difference between the democratic left and the totalitarian right and that an explosion of institutions was exactly the most thrilling thing imaginable.

The American Republic stands threatened by the first overtly anti-democratic leader of a large party in its modern history—an authoritarian with no grasp of history, no impulse control, and no apparent barriers on his will to power. The right thing to do, for everyone who believes in liberal democracy, is to gather around and work to defeat him on Election Day. Instead, we seem to be either engaged in parochial feuding or caught by habits of tribal hatred so ingrained that they have become impossible to escape even at moments of maximum danger. Bernie Sanders wouldn’t mind bringing down the Democratic Party to prevent it from surrendering to corporate forces—and yet he may be increasing the possibility of rule-by-billionaire. 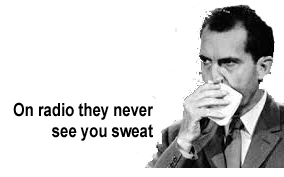 Gopnik’s is an excellent analysis of what’s going on. The extreme bi-partisanship in the US, partly created by their system of government, has allowed a character like Trump to hijack one of the major political parties. With his lack of a core and ever-changing values, it could almost as easily have been the Democratic Party he took over. When John F Kennedy won the presidency, it was put down to how much better he appeared in the first ever televised presidential debate. (See here.) Now we have a candidate who has no policies behind his positions, which is difficult when they frequently changed anyway, but has almost universal recognition. Trump’s ability to brand himself as a success despite his lack of substance may be the key to his increasing popularity. He seems to be made from Teflon as the most appalling behaviour, which would see any other candidate destroyed, is shrugged off by his followers as, “telling it like it is.”

Like most of us, when USians vote, they vote their pockets. We New Zealanders watching the US election are at least as concerned about what it means for the rest of the world. The idea of the most powerful country on the planet being led by Donald Trump is simply horrendous. Republicans think their country’s reputation has diminished under Obama’s presidency (the opposite is actually true). If they elect Donald Trump, that will be true.