Tau Kē Tēnei Wiki: The International Reputation of President Obama and the USA 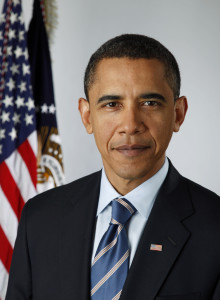 There’s a whine we’ve been hearing from Republicans with ever-increasing frequency since the start of Obama’s presidency: that the United States is less respected than it was in the Bush era, and especially that his leadership is seen as both weak and of poor quality. They especially like to contrast Obama with Vladimir Putin, to the detriment of Obama, and insist the reputation of the country has suffered under his presidency. This could not be further from the truth.

I’ve written a short post about this before: Obama vs Reagan: The Bogus GOP Comparison. We’re hearing a lot about Reagan again of course – we’re in an election cycle and Republican candidates always do all they can to align themselves with Reagan; it’s a tactic that tests well in focus groups. The fact that the Reagan Legend has little to do with reality seems to be irrelevant. Rachel Maddow covered some of the problems with the legend earlier in the week – see here for video of her Reagan take down. Suffice to say, there’s a lot to criticize.

Republicans also say, now that they’re forced to admit the error of the Iraq war, that it was the only reason that President George W Bush was unpopular. However, we in the rest of the world already had a pretty low opinion of Bush, and, in fact, a great deal of anger towards him and US Republicans before the disaster in Iraq.

During the early days of Bush’s presidency, he faced major protests wherever he traveled around the world. His failure to sign the Kyoto Protocol and to deny man-made global warming was even real when his country was the world’s biggest emitter of greenhouse gases made him beneath contempt in the eyes of many.

U.S. President George W. Bush has arrived in Madrid on his first official visit to Europe since taking office.

He is facing international criticism on the issues of global warming and his plans for a national missile defence system.

Many European allies are angry at Bush for his opposition to the accord and have expressed scepticism about his plans to deal with global warming.

There have been protests in Madrid against the Bush administration’s environmental policies. Three protests have been held since Sunday.

“We want to tell him that he is not welcome here if he keeps with his policy to reject the Kyoto Protocol, the first and only international agreement against climate change,” said one demonstrator representing Greenpeace.

Then 9/11 happened, and you don’t kick somebody who’s been through something like that.

The myth of Obama’s leadership and, by association, the USA being disrespected was brought up again last week with the final State of the Union address. He stated that the status of the United States had increased over the course of his presidency; several GOP candidates for their nomination have since charged him with being a liar and delusional.

My personal impression is that the United States is far more respected now as we approach the last year of Obama’s presidency than it was eight years ago. My opinion doesn’t make it so though, so I checked out the data. It shows that not only is the leadership more highly thought of these days, world opinion of the man Republicans compare Obama unfavourably with, Vladimir Putin, has been dropping steadily.

Since 2007, Gallup has been asking about presidential approval not just in the US, but in 135 other countries. They have also compared leadership approval (or otherwise) with that of Russia, China, the European Union, and Germany. They report that: 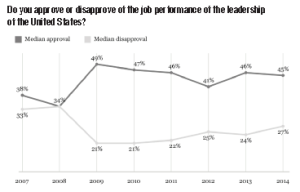 That sounds to me like a pretty thorough endorsement of Obama by the international community. And as Gallup points out, that means the US wields a lot of soft power. Republicans seem to want someone who gets their way by bullying and threatening. That might work short-term, but long term it is soft power that works. You catch a lot more flies with honey that vinegar, as the old saying goes.

As for the Republican hero Putin, Gallup reports:

Internationally, approval of US leadership is looking pretty good. 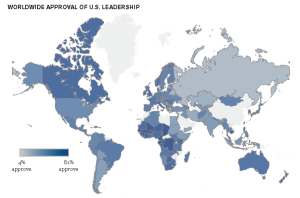 Of the 135 countries surveyed, only fifteen have a higher disapproval than approval rating of US leadership. They’re largely the countries you’d expect. The highest ten are:

The ten countries with the highest opinion if US leadership are:

Germany (Angela Merkel) comes in a pretty close second to Obama, with 41% median approval in 2014 and median disapproval at 22%.

The European Union at third gets similar ratings to Germany: 39% medial approval and 26% median disapproval.

China (Xi Jinping) has median approval of 29% and median disapproval of 28%. All the countries that rate China most highly are in Africa, and many are the same ones that rate the US highly. My assumption is this is a sign of the US and China spending foreign aid in those countries to help retain their friendship – an example of how soft power is gained. It is the reason all those presidential candidates who say that all overseas aid should be stopped are not only wrong, they’re stupid. If the US stops helping those countries, all their allegiance will be to China. Further, foreign aid is both cheaper and far more useful to the countries concerned than the potential future cost of conflict.

Only seventeen of the 135 countries surveyed had more people approving of Putin’s leadership than disapproving of it – almost exactly the opposite of Obama. Six of those are former Soviet republics: Tajikistan, Kyrgyzstan, Kazakhstan, Armenia, Uzbekistan, and Belarus.

Interestingly, as Russia’s reputation has fallen internationally, within Russia it’s risen. When asked separately about their opinion of their own country’s leadership, 68% of Russians gave it their approval. I suspect it’s no coincidence that Russian control of the media, especially television (where most Russians get their news), has a lot to do with this, 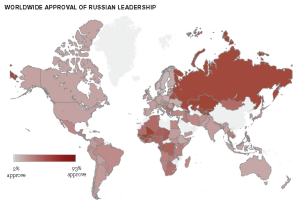 It was in 2014, of course, that Malaysian Airlines flight MH17 was shot down over Ukraine. Of the 298 passengers and crew aboard, 189 were from the Netherlands. Russia used to be fairly popular in Ukraine – their takeover of Crimea and military action in the east of the country saw Ukraine’s approval of Russian leadership fall a whopping 41 points between 2013 and 2014. Latvia and Lithuania have also seen big drops in their approval of Russian leadership (sixteen and fifteen points respectively). Both countries have reported to NATO that they consider that their membership of the organisation is the only reason they haven’t gone the way of Georgia and Crimea.

At the end of July 2015, Russia used their UN Security Council veto power to prevent an independent enquiry into the downing of flight MH17. The missile that destroyed plane was a Buk missile system that couldn’t have been in the hands of the Ukranian separatists without the full knowledge and cooperation of Russia. Further, a member of the Russian military has been informally identified as operating the equipment. It was this incident that made it impossible for Russia to continue to credibly deny their military’s involvement in Ukraine. 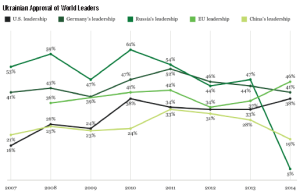 Despite the accusations of Russia, there hasn’t been a huge move towards other leaders – opinion has remained fairly steady. There was the big jump in US approval that most countries saw with the inauguration of President Obama, and Russia was more popular under President Medvedev, but it doesn’t look like there’s been any manipulation of public sentiment.

It seems clear to me that the claims of Republicans that the reputation of the United States has suffered under President Obama are outright lies. It is a claim not supported by data obtained by a reputable company that is freely available.

If Republicans plan to unleash their idea of leadership on the world – the bullying and bluster of Donald Trump, or the sanctimonious smarminess of Ted Cruz – I guarantee the international approval ratings of US leadership will begin to trend downwards once again, just like last time there was a Republican in office.