Will Women Save America From Donald Trump?

Super Tuesday, the biggest primary voting day on the calendar was this week, and the results have pretty much decided who the Democratic and Republican nominees for president will be: Hillary Clinton and Donald Trump. However, most of the others received enough encouraging signs to make them stay in the race.

On the Democratic side, Bernie Sanders won four of the eleven states, all of them by significant margins:

Despite winning only seven of the eleven states up for grabs on the Democratic side, Clinton remains their most likely nominee. It’s hard to see how Sanders could win from here. There has been much comparison between his and Clinton’s negatives with the assumption that Sanders doesn’t really have any, but I think that analysis is flawed. Nobody has really exposed the negatives of Sanders yet, and they haven’t bothered because he was always unlikely to be the nominee. Clinton, on the other hand, has been brutalized by the right since long before she even started running. There is some valid ammunition there, but she’s held up in the face of it better than might have been expected.

Kasich came a close second in Vermont and second equal with Rubio in Massachusetts. He is also likely to win his home state of Ohio when that comes up. As I’ve said before, he’s the only remaining Republican candidate capable of actually being president. However, that’s not a quality most Republicans are looking for this year. They will nominate Trump in opposition to the more reasonable voices in their party, continuing to believe he will do what previous nominees have promised to do.

(There’s an excellent article in Vox which reader Scott Draper brought to people’s attention in another forum about why voters are supporting Trump: ‘The Rise of American Authoritarianism‘. It naturally supports an elitist leftist position, but there is a lot of useful analysis in it that should not be ignored because of the source. There’s a lot of good analysis done by Vox in my opinion.)

The only candidate who received no encouragement from Super Tuesday was Ben Carson, and it’s time for him to admit it. Of the five remaining candidates, he came fourth or fifth in every race and (barely) made it out of single digits in only two of them. It’s hard to know where his voters would go though. The three main reasons people support Carson are his outsider status, his strong religious conservatism, and the decency with which he’s run his campaign. Those things are not embodied in totality any one of the other four candidates. Trump is the only remaining true outsider, Cruz has the greatest claim to be the most conservative (though Rubio isn’t far behind), and Kasich is the only one who retains any dignity.

From the start, unlike most commentators, I believed Trump would stay in the race a while and do reasonably well. However, I was also sure he wouldn’t be nominated and it’s now all but certain I was wrong about that. Many are worried that he could win the presidency, and the fact most of us thought he wouldn’t be nominated means we think we could be wrong about that too. However, I think there is far more reason for hope when it comes to the general election. Having said that, I don’t think Trump should be considered an easy-beat.

Assuming a Trump/Clinton race for the presidency, we can further assume both candidates will have a base of about 40% of the vote. The competition, as always, will be for that middle 20%. Trump has assured his detractors in the Republican party that his demeanor will change in the general election, but I’m sceptical of that. Firstly, even if he refrains from attacking anyone else, he will attack Clinton. That’s to be expected when it comes to policy, but he’ll get personal too. That’s more problematic than usual because Clinton is a woman. Trump already has a problem with women, even amongst his core voters. Just look at the gender imbalance of his voters in the Super Tuesday states: 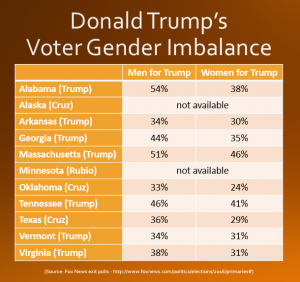 The difference between the male and female vote for Trump is up to 16 points. I don’t expect that many Republican-voting women to switch their support to Clinton; I do expect a number will choose not to vote at all because they can’t bear to vote for their party’s nominee. It’s clear Trump’s history insulting and patronizing women and judging them on their physical appearance has made its mark. His comments are not the sort of thing women will forget either. (For a start, they’ll be constantly reminded via political attack ads.) When it comes to that 20% of the electorate Trump and Clinton are both fighting for the women in that group, especially the single ones, are even less likely than Republican women to forgive Trump’s comments. I suspect that they’ll fall at least 60/40 for Clinton. Further, that middle 20% usually has a higher percentage of women than men in it, and women are more reliable at turning out to vote than men. What this means is that the middle 20% are far more likely to vote for Clinton than Trump. So even if the Democratic turnout is lower than the Republican one, which looks likely, there is a bit of a cushion there for Clinton.

This graph from Wikipedia shows the male vs female turnout in the 2008 election: 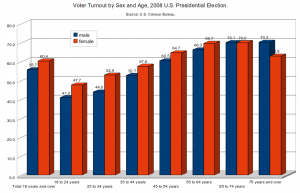 There will be plenty of voters not wanting to support either candidate, but more will stay away from the polls because of Trump than because of Clinton. Therefore, Clinton wins there too.

As this century has progressed, the demographics of the United States in relation to race has changed significantly. It is now impossible, for example, for a presidential candidate to win the election unless they get at least 30% of the Hispanic vote. George W Bush managed it in 2004, but no Republican has done it since. With the insults Trump has thrown against Mexicans in particular, his promise to deport all illegal immigrants, and multiple other other examples of anti-Hispanic racism, it’s unlikely Trump could get more than 15%-20% of the Hispanic vote, no matter how many times he says, “The Mexican people love me.”

The story is similar for other minorities – there is hardly a single one he hasn’t insulted in some way. While the people at his rallies celebrate him for “telling it like it is, ” everyone who isn’t white-skinned or Christian is nervous about becoming the target of his wrath. All ethnic and religious minorities (including atheists) are more likely to vote for Clinton than Trump. Those demographics have traditionally supported the Democratic Party in recent years, and that looks likely to continue.

There is another demographic that must be looked at where the predictions are much more difficult. Trump’s supporters are more likely than the average voter to have no more than a high school education. The lower a person’s educational attainment, the less likely they are to vote, as can be seen from this graph of 2008 presidential election voters from Wikipedia: 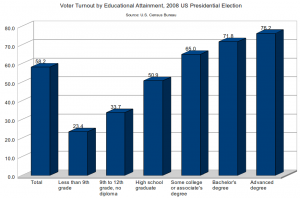 However, Trump appears to have energized those voters, so he may be getting people to the polls that don’t usually vote. At the same time, the antipathy voters with a higher education generally feel towards him may prevent them from voting, cancelling out the effect. There will be polls closer to the election that can assess the effect on Republican voters of having Trump for their nominee – it will be interesting to see what the result it.

I think there’s a strong possibility that a Trump candidacy will deal a crippling blow to a party that’s already struggling to adapt to the changing face of America. However, if Clinton is indicted as a result of the current FBI/Department of Justice investigation, she’ll do major damage to the Democratic party. That could derail all predictions in relation to Trump.

Where we’re sitting right now, Trump is looking pretty scary. But in reality, it’s just a third of Republican primary voters who are supporting him. Democrats should by no means take him lightly, but the odds are on their side largely because of women voters. Turn out will be key though. At the moment, the Republican electorate is much more energized than the Democratic one. If they want to stop Trump taking the White House they must get their supporters to the polls.

The rest of the world is horrified by the thought that the most powerful politician in the world could be a reality TV host. Seriously America, what the f**k are you thinking?