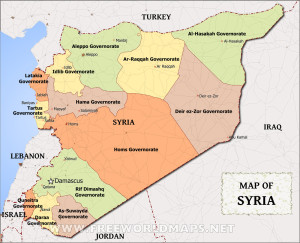 In reality, Syria has been a worry for years. Bashar al-Assad took over the presidency, the role of commander-in-chief of the Syrian armed forces, and the leadership of the ruling Ba’ath party on his father’s death in 2000. For several reasons, including his British education and wife, there was hope he would be a reformer. He himself indicated he would make changes. In reality, things have become progressively worse.

Four years ago Assad’s people had had enough and Syria’s version of the Arab Spring occurred. Assad responded by attacking his people, and the Syrian Civil War broke out. Since then more than 250,000 people have been killed, most of them by Assad. Even worse, not only has Assad used conventional weapons against his own people, he has used chemical weapons and barrel bombs. 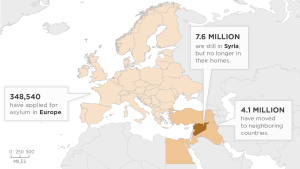 The official figures from the United Nations High Commissioner for Refugees (UNHCR) are that three million people have fled Syria and another 6.5 million are internally displaced, though unofficial but reliable estimates (see map, left) put the figures much higher.

Initially, most of the refugees who fled Syria went to Turkey, Lebanon, Jordan, and Iraq. Some were fleeing across the Mediterranean to Europe, but most of those doing that were, until recently, escaping the turmoil in Libya, not Syrians. Now, increasing numbers of Syrians are trying to escape to Europe too. We’ve heard multiple horror stories about the suffering of those who have given their life savings to unscrupulous people smugglers resulting in such tragedies as seventy people suffocating to death in the back of a truck and left on the side of a road.

This picture of Aylan Kurdi will become one of the images of our time, like the naked girl running down the road in Vietnam. There’s one big difference – she lived to tell her story.

For the few who hadn’t already been moved by the plight of Syrian civilians, that changed when they saw the body of three-year-old Aylan Kurdi washed up on a Turkish beach. His mother Rihan and five-year-old brother Galip were found further up the same beach. Their husband and father took them back to Syria for burial, any dreams of making a future for his family utterly destroyed.

Thousands of miles away in New Zealand, there’s little we can do, and it’s frustrating to feel so helpless in the face of such suffering. Small numbers have been so moved by Assad’s attacks they’ve joined the fight against him. Hundreds of thousands have donated to charities supporting the refugees, and there has been overwhelming support for us to increase the number of refugees we accept, which the government has finally listened to after initially rejecting the idea. Our military is also assisting with the training of the moderate opposition, but so far that appears to have been largely unsuccessful. The best the US military who are leading that operation are able to say is that they’ve learned what not to do.

As a very small country we only have minimal diplomatic influence too, although it’s slightly raised at the moment as we’re a member of the United Nations Security Council. We do have a reputation at the UN of being a country that’s fair, lacking in corruption, and independent though, which helps. In his speech to the United Nations General Assembly on Friday, prime minister John Key took the opportunity to continue New Zealand’s call for the P5 (USA, Russia, China, Great Britain, and France) to give up their UN Security Council veto power. New Zealand has taken this stance for many years, and they have a lot of support.

The P5 countries naturally don’t want to give up their power, but the moral pressure against them is growing. It looks possible that in the future they may give it up in situations where there are mass casualties such as the one in Syria. France has said they’re ready to discuss terms, and Great Britain has said they’ll look at it. I think the USA would be prepared to look at it too except they usually use their veto power when Israel is unfairly targeted. So I suspect we’ll have to wait until the Israel/Palestine situation is sorted before they’ll move on the issue. We can only hope, and it won’t help the current situation in Syria. However, the fact that Key was given a speaking spot when very few would have been listening is probably indicative of how much likelihood there currently is of changing anything. 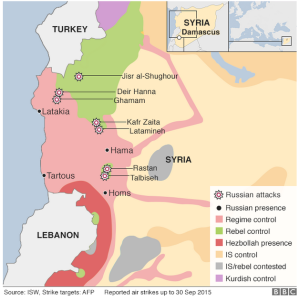 With all this happening, it was impossible to imagine the situation getting any worse in Syria. Assad was getting weaker, and only managing to hold on thanks to weapons from Russia and soldiers from Iran. DAESH, although still having successes, was having increasing setbacks too, and the al-Qaeda factions in the area were weakening. The Free Syrian Army and their allies (the “rebels” on the map) were finally gaining traction. It was looking possible that Assad could be forced to make a settlement.

Thanks to Vainglorious Vlad, that’s over. Two weeks ago, I started my Worry of the Week with the words, “Just when you thought things couldn’t possibly get any worse in Syria, they have.” I wrote about the evidence that there was a massive Russian military build-up in Syria. It appears that the build-up was even bigger than anyone realized. Dozens of Russian fighter jets appeared in Syria without anyone knowing they’d flown there – they had used the old tactic of flying underneath cargo planes to hide from radar.

Republicans are mocking Obama’s statement that Putin going into Syria is a sign of weakness, but he’s right. Putin has two clients in the Middle East – Iran and Syria. Iran is now not as isolated because of the Iran deal, and so they don’t need Russia as much. If Assad is forced out of power, as was looking likely, Putin would lose control there too. Putin needs to keep Assad in charge of Syria, because he wants to keep being a player in the region.

I suggested too that under the guise of fighting DAESH, Putin would attack the rebels, and it appears that’s exactly what he’s done. According to the Independent: 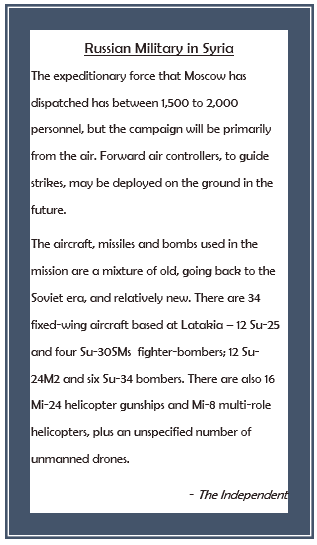 The initial waves of Russian air strikes were aimed at the rebel groups that pose the greatest immediate threat to the regime. The main targets have been Jaysh al-Fateh, or the Army of Conquest, a coalition of Islamist groups ranging in extremism from al-Nusra to Ahrar al-Sham, which is backed by Turkey and Saudi Arabia.

The Russians insist that they have only targeted terrorists. Foreign Minister Sergey Lavrov said that the Free Syrian Army (FSA), the military arm of the western-backed Syrian opposition, were not considered by Russia to be terrorists and “should be part of the political process”.

However, a FSA communications centre in Aleppo was destroyed late on 1 October [see BBC video below] and when Vladimir Putin’s spokesman, Dmitry Peskov, was asked about the FSA, he responded: “Does it exist? Haven’t most of them switched to Isis? It existed, but whether it does now nobody knows for sure.”

The BBC also has footage from the Free Syrian Army controlled area that appears to show that Russia are attacking anyone that Assad considers an opponent, not just DAESH as they purport:

According to the Syrian military, Russia carried out eighteen air strikes in the first three days, including attacks against targets in Aleppo, Hama and Idlib. The BBC says there is little DAESH activity in these areas. Some members of the Russian military are telling other stories of what has been happening in Syria. The BBC reports that Alexei Puskov, the head of the foreign affairs committee in Russia’s parliament, has said the US have only been pretending to bomb DAESH, and Russia will do a much better job against them.

“The British-based Syrian Observatory for Human Rights said a training camp and a camouflaged command post near Raqaa were hit, and 12 IS [DAESH] fighters were killed.” (BBC) Raqaa, of course, is the capital of DAESH’s self-described caliphate and their stronghold.

According to Douglas Barrie, a senior fellow at the International Institute for Strategic Studies, the Russians do not have the equipment to make the precision strikes they are claiming. He says the same thing happened in the Georgian War in 2008, and the problem is that not enough has been spent on the development of advanced weapons systems since the Soviet era. Since then they have apparently obtained laser and electronically-guided missile systems, but do not use targeting pods so they are not as efficient as they could be.

So it seems that it is likely everyone is being economical with the truth. I think the most likely scenario is that Russia has hit both Free Syrian Army targets, other groups opposing Assad, and DAESH targets, and there have been civilian casualties.

The Independent‘s report concludes with this chilling paragraph:

Pavel Felgenhauer, an independent military analyst in Moscow, said: “Right now they are just softening up the opposition. Then will come the ground offensive. It will be us in the air and Syria, Iran and Hezbollah on the ground. It’s going to be a terrible blood bath. Tens of thousands will be killed and the consequences for Europe will be even more refugees.”

So I won’t say that things couldn’t get any worse again, because they probably will.

And to all those Republicans who are saying that Obama should DEMAND the Russians stop attacking, how on earth do you expect him to enforce that? What the f**k should he do when they keep bombing anyway? Shoot them down? World War III here we come, and this time everyone has nukes. Stop being so f**king stupid!