Just when you thought things couldn’t possibly get any worse in Syria, they have. Putin is going to speak at the United Nations in a few days, and political commentators such as the Guardian‘s Natalie Nougayrède are predicting that his speech will be a call for all nations to unite behind Syria’s president, Bashar al-Assad to defeat DAESH in particular and terrorism in the area in general. This is just an excuse of course, a means to an end that Putin thinks will favour him. 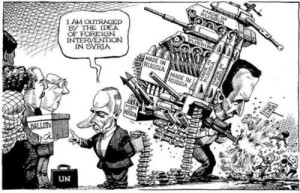 Putin apparently started the transfer of weapons to Syrian government forces some time ago, although he has denied this constantly. Now, there is clear evidence that there is an extensive build-up of the Russian military in Syria too. There are satellite images of changes in the airfield in the Syrian port city of Latakia for example, as shown below. The transport planes in the images are said to have transported pre-fab’ accommodation for one thousand personnel. Another (though much less reliable) source has the massive Russian nuclear submarine, the Dmitri Donsky, redeploying to the Syrian coast.

There has also been evidence recently that Assad is still using chemical weapons against his people, despite Russian assurances that all stock of these had been removed from Syria. Instead, we had the harrowing images of more innocent people, including children, suffering from this especially cruel form of attack. 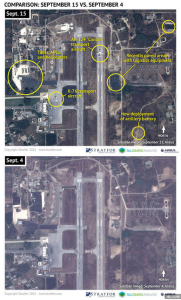 Unlike the rest of the West, Putin has maintained a good relationship with Syria. In 2013 he came in as the hero of the hour with his plan to rid the country of chemical weapons after Obama decided not to bomb the country when they crossed his infamous Red Line. There is no doubt he loved the kudos that gave him. His invasion and annexation of Crimea though have put him on the outer in diplomatic circles. The G7 became the G8 originally to give Russia face after the dismemberment of the Soviet Union, but because of Putin’s actions in Crimea it’s reverted to being the G7, and he hates that.

My opinion is that Putin is trying to use Syria to become the hero again. He’s going to attack DAESH. “Everyone will love me for saving the world from terrorists. What,” he thinks, “could possibly go wrong with that?”

Well plenty, and (hopefully) his case will fall on deaf ears anyway. For a start, no-one trusts him. He lied about his intentions in Crimea, he has not kept his word in the various agreements over eastern Ukraine, and the world has had it confirmed in the last few weeks that despite his assurances, Syria not only still has chemical weapons, but is continuing to use them on her people. The world’s leaders recognize that DAESH is living amongst innocent civilians. That’s why Obama hasn’t been carpet bombing the region – he doesn’t want to make the same mistakes his predecessor made. Also, while Putin represents the identity of the terrorists to the world as DAESH, Assad’s definition of terrorist is anyone who opposes him and their family.

In Russia, Putin can manipulate public opinion to maintain the illusion he’s the hero and only attacking extremists, but he can’t do that elsewhere. So his plans to go in and save the world from terrorists and make himself a hero in the process are little more than a(nother) delusional testosterone-fueled fantasy.

John Kerry is trying to salvage the situation, but as Putin is already in Russia and ready to go, it’s going to be tough. From Alastair Jamieson of NBC News:

Speaking after talks in London with British Foreign Secretary Philip Hammond, he indicated that the timing of Assad’s departure was not as important as finding a political settlement to end the four-year war and worsening refugee crisis.

“Assad has to go,” Kerry said, but the “modality” and “timing” of his departure were a matter for discussion.

“We need to get to the negotiation. That is what we’re looking for and we hope Russia and Iran, and any other countries with influence, will help to bring about that, because that’s what is preventing this crisis from ending,” he said.

“There is an urgency” in the need to find peace, he said, adding: “This is a critical moment.”

There is no credible sign that Putin is ready to overthrow or replace Assad. Nor was there ever a serious Russian intention to do so, at any point. In the summer of 2012, when the big powers met in Geneva to discuss a Syrian national unity government, Russia made sure that this would not entail Assad’s departure. Russia has consistently shielded the Syrian president.

It’s not that talking to Putin about Syria is wrong in itself. What counts is what is said and what actions are taken as a result. If Putin is genuinely interested in what the west calls anti-terrorism, then putting an immediate end to barrel bombs and other Syrian government atrocities would be a good place to start. Assad’s military machine is the main cause of civilian deaths – and now it is pumped up with new Russian weapons. Assad and Isis feed off each other. It is in Assad’s interests to make sure Syria is viewed – as is widely the case now in the west – as primarily a clash between him and violent extremist jihadism. And Isis is able to recruit because it claims to defend Sunni populations against the indiscriminate onslaught of Assad’s military.

The Russian logic of propping up a regime that actually fuels, rather than reduces, violent Islamic militancy can be challenged as contradictory. After all, Russia has domestic concerns with jihadism on its southern flanks. But for Putin the political gains of harnessing an ally, demonstrating steadfastness and parading Russian clout in the Middle East – while the west wallows in confusion – largely outweigh that apparent contradiction. Even if one day Assad ends up dead, jailed or on the run, Russia will have, in the meantime, shown resolve.

Putin’s suggestion that the west should embrace Assad is an illusion that will lead to more bloodshed in Syria and won’t solve the refugee crisis. It risks making Syria an even greater hell, if only because alignment with Assad will be met with more meddling by Saudi and Gulf actors who back Sunni Islamic insurgents.

In my opinion, Nougayrède’s analysis is spot on. I consider Putin to be the most dangerous player on the world stage at the moment, and what he is doing in Syria is going to make the situation worse than ever. He is handing another recruitment tool to the terrorists and even more innocent victims are going to suffer and die. And so far, I haven’t even mentioned the refugee crisis, as alluded to above. This is the worryingest of all the worries of my “Worries of the Week.”