Trump’s response to Chris Matthews in an MSNBC Town Hall is well known by now:

Trump clearly didn’t have a response ready for this question and was thinking on his feet. His immediate instinct though was that women are doing something illegal and need to be punished. Although it’s not in the clip, and most media outlets haven’t even mentioned it, he thinks the man involved doesn’t deserve punishment.

There was an immediate slew of criticism. Trump, with one short sentence, managed to offend both the pro- and anti-choice advocates. All of the others still in the running to be their party’s nominee attacked Trump’s comment.

Within a couple of hours, the Trump campaign had released a statement backing away from the comment and denied he’d even made it in some interviews the same day. 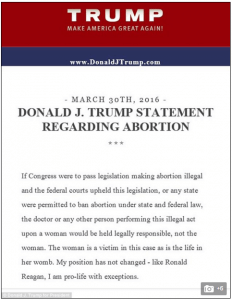 My position has not changed – like Ronald Reagan, I am pro-life with exceptions.

As I said above, he’s effectively denying he even made the statement, plus he’s aligning himself with Saint Ronald for added effect. In the latest CNN/ORC poll, Trump has a 73% unfavourable rating with women, and that was before this latest incident. His unfavourable rating was already getting worse with women – in the same poll in late February it was 67% and in December it was 59%. As I’ve posted before, if Trump is the GOP nominee, his ratings with women will scuttle him.

Apart from the obvious anti independent women attitude Trump displayed, his response displays his lack of readiness to be president. Any presidential candidate, particularly a Republican one, should know that they are going to be questioned about social issues. This is not an hypothetical either – banning abortion is part of his policy platform, so what would happen if he achieves his wish is something he should have thought about.

Trump clearly hadn’t thought about what he would do. He seems to have just taken his policy position because he thinks that’s what would appeal to the voters he’s trying to attract. As he was thinking out loud he said:

Well, people in certain parts of the Republican party and conservative Republicans would say, “Yes [women should be prosecuted].”

That’s actually not what the anti-choice movement says. What they want is for women to be required to carry their foetus to term then either care for their baby themselves or for it to be adopted out. They do not advocate criminal prosecution of women who have abortions.

However, I do have a problem with the way this issue is being talked about on places like Fox News, and by organisations like Family First.

Firstly, there are some who insist that this is irrelevant because abortion will never be made illegal in the US. This is completely disingenuous. Almost all GOP candidates throughout the country include making abortion illegal (except for rape, incest, and the life of the mother) in their policy platforms. Therefore this is legislation that will presumably be put forward if they are elected and, given that the GOP currently holds both the House and Senate, could pass. 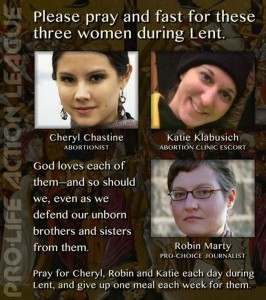 Secondly, they insist that they do not want women who have abortions if it becomes illegal to be prosecuted. While it is true, it is also disingenuous. Almost all anti-choice organisations want abortion to be illegal because of their religious views. Women who have abortions are sinners, and are sinners of the worst kind. Within Roman Catholicism, for example, abortion is an excommunicable offence.

If you think I’m exaggerating about the way women are treated in this circumstance, read this. It’s about a Catholic women who got pregnant because her Catholic employer refused to cover the cost of contraception so she and her husband relied on the Rhythm Method instead. It failed and she questioned her faith on-line after giving birth to a disabled child. The abuse heaped on her by her fellow-religionists was appalling.

This year, Roman Catholic women get a special dispensation, because it’s a Jubilee Year, and the pope said so, and the morality of the Catholic Church has always been very elastic and depended on things like who you are, and how much money you have. If you’re a priest, for example, abusing children is okay. Or if you’re a Mafia boss, a big enough donation can get you forgiven anything. Make sure you have your abortion before 20 November though, because that’s when the current Jubilee Year finishes, and once again you’ll be kicked out of the Church if you have an abortion.

So while women who have abortions would not be prosecuted, they would still be treated as second-class citizens by many. Even now when it’s legal, there are extremists in the anti-abortion movement who perpetrate acts of violence against both those who provide abortions and those who seek them out. The National Abortion Federation maintains a database of those cases. This violence has included eleven murders and twenty-six attempted murders since the early 1990s, as well as multiple bombings, arson attacks, acid attacks, stalking incidents, trespass, kidnapping, harassment, and more.

On top of this are the multiple attempts to try to stop abortions by placing restrictions on abortion providers that are playing out in the US courts every day. Just last week a new law in Utah was passed that could literally kill women who attempt to maintain an abortion. This New York Times article shows that since the increased restrictions that have been placed on abortion clinics throughout the United States, exclusively by Republican legislators, there appears to have been an increase in DIY abortions. All the anti-choice movement is achieving is putting the lives of women at risk.

No-one respects women more than me. Believe me. 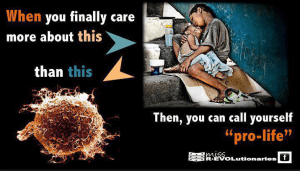