Trump in Control at the White House? (plus Tweets) 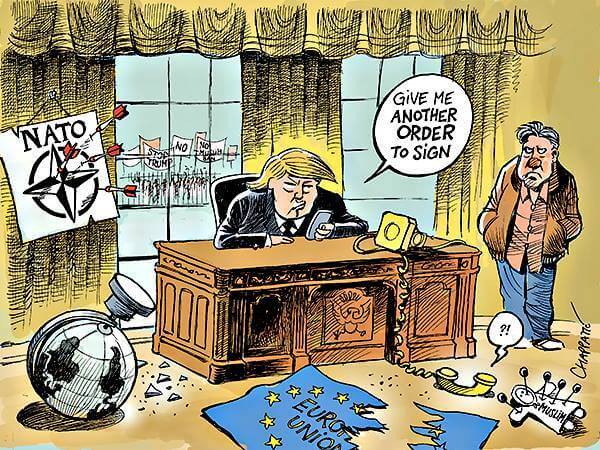 The more I do these tweets posts, the more I find the USA is dominating them.

When I began this website, I didn’t expect to be writing so much about the US. My plan was to focus on international politics in general, especially how that’s effected by religion and how it effects women. Of course, the US is a huge player in world events so they were always going to be a big part of things.

Then Donald Trump happened. Whatever you think of him, he’s impossible to ignore. He’s going to dominate the narrative for some time to come. Even as he pulls the US back from its traditional role of leadership of the free world, some the fault lines that’s putting pressure on are reaching breaking point. When he gets involved, as with North Korea, it’s even worse.

I’m starting to think I need to greatly expand my knowledge of US history and politics in an attempt to be a better commentator on what’s happening there. The American century may be over, but they’re going to continue to dominate world affairs at least in my lifetime. I don’t feel up to the task of properly analysing that currently. I need to know more and read more.

Trump’s own lack of knowledge was one of the main themes of Michael Wolff’s new book, Fire and Fury. He is clearly upset by the attacks on his intelligence in the book. Today, he tried to do something about that by letting the cameras into a meeting on immigration he was chairing between Democrats and Republicans.

It was interesting to see the different way this was reported on Fox News and CNN.

Fox News portrayed the attempt as successful. They told everyone what a great job Trump did getting everyone to work together. They didn’t seem to notice that after going after Jeb Bush mercilessly for calling immigration an Act of Love, he called this a Bill of Love.

The CNN portrayal was, in my opinion, more accurate. They showed that Trump clearly didn’t have a good knowledge of the details. He agreed with the Democrats, and had to be rescued from committing to something before it was set in stone by a Republican.

He also said several times how he would sign whatever the group put in front of him. Throughout the election campaign, Trump told voters repeatedly that his biggest asset was what a great negotiator he was. There was no sign of that today. All he wanted was for the work to be done and to be able to get the signing ceremony photo opportunity and a big tick in the win column.

I don’t think he even realizes how much work writing a Bill entails. He still seems to think it’s easy. New York Times reporter Maggie Haberman noted on CNN that the GOP leadership has asked him to stop using the phrase “comprehensive immigration reform” on camera. (He clearly doesn’t know what that entails – he kept getting it wrong today.) However, he keeps using it – I suspect because it sounds good.

I would assume Trump thinks today’s media opportunity went well and was successful at showing him to be intelligent, interested, and in charge.

Well, no one was going to face him down in that situation, even if they were inclined to, so yes, he looked in charge. And he’s had years of chairing meetings, so he has experience in that regard anyway.

And most of us know how to look interested, even if we’re not.

But he wasn’t in charge of the facts in the way he should be. However, I doubt he realizes that. You don’t know what you don’t know, especially if you’ve never been inclined to ask. On Fox News‘s ‘The Five’, I noticed some of his supporters thought he did well. The one who knew more about the subject because she’s a veteran of the White House kept quiet.

Trump did have one big win today though. Steve Bannon is out the door at Breitbart News. He’s also lost his radio show on Sirius XM. The Mercer family has stopped funding him too. He no longer has a platform to push his ideas.

And you know the Republican establishment is feeling good – they’re talking about reintroducing pork barrel politics. So much for John Boehner’s reforms. No wonder they wanted him gone.

From the article in the link in the tweet below:

A senior figure in Palestinian militant group Hamas was hospitalised in critical condition on Tuesday after suffering a gunshot wound to the head in what officials said was an accident.

Imad al-Alami, a founding member of Hamas and former member of its highest political body, was wounded while “inspecting his personal weapon in his home and is in critical condition”, Hamas spokesman Fawzy Barhoum said in a statement.

Now I know stuff like that does happen, and I’d assume Imad al-Alami keeps his gun loaded, but really? He “was wounded while ‘inspecting his personal weapon’.” The next sentence in the article is:

I’m not going to speculate about what really happened, but I’m damn sure I don’t accept the Hamas version.

Un-effing-believable. “Only in America”, as the saying goes in the rest of the world. Former Sheriff Joe Arpaio is running for Senate in Arizona. Jeff Flake, whom Arpaio wants to replace, says it won’t happen. I hope for Arizona’s sake he’s right.

He was found guilty of criminal contempt but later pardoned by President Trump. pic.twitter.com/JoWkHaZpGg

Part of the meeting I wrote about above.

Here’s the incredible moment where Trump initially agrees to Feinstein’s suggestion that they do a clean DACA bill, before being corrected by Republicans about what she was actually suggesting. pic.twitter.com/RaXAQAi8JF

To be fair, although Trump does go above and beyond when it comes to verbally attacking the press, his bark is worse than his bite. Because of the Constitution, the law, and the general political atmosphere of the US, he couldn’t get away with the things that Putin and Erdoğan regularly do i.e. imprisoning and even murdering journalists. However, Trump’s constant undermining of confidence in the press is a disgrace and dangerous to democracy.

Today, the Committee to Protect Journalists named Trump the top global “press oppressor,” alongside some of the world’s most brutal dictators.

This is where we are.https://t.co/zHx4NFwx8o

These are real people. This is not a joke. (You have to go to the link in the tweet to see the video.)
(Via Ann German.)

amazing rhetorical strategy from James Damore’s lawyer, Harmeet Dhillon, who basically insinuates that her client is a nazi in today’s lawsuit.https://t.co/eDDNBybQZV pic.twitter.com/6XA6A5K29F

I laughed, but that’s probably what would have happened to me in the same situation these days (and I used to be a gymnast!).

“watch me Denise, there’s a knack to this” pic.twitter.com/yu7IuW28x9

I’m not sure whether I should put this in the “Funny Tweets” section. It’s actually a sad commentary on the way politics in particular is often done these days. Experts are ignored or put down far too often, while the confident amateur sucks in the masses. And I’m not just talking about Trump. There are multiple areas in medicine, for example, where this is the case too. Quack cures, the anti-vax movement, anti-GMO, and organics are just a few of the things where idiots have taken control of the narrative.
(Via Ann German.)

600 million years of human evolution in a flip book pic.twitter.com/EvG5z6qB55

Just what you always wanted! I would laugh, but as someone who’s (finally) just been diagnosed with mild lactose intolerance, I can actually see instances where it would be useful.
(Via Ann German.)

Look at the character in that face!

More from this incredible talented photographer:

This is very, very cool indeed!

I really should give otters a section of their own. And pandas. Oh, and red pandas. And … well, you get the idea!

Excuse me, do you have any fish? pic.twitter.com/ s1YYyXU9UD

This dog is already typical of his breed, He’s determined not to go to sleep because he has to guard the baby. Very sweet.

This dog has his spatial awareness going on!

All nine lives in one pic!

oh give me them ALL pic.twitter.com/ m3RatnToDT

This duck want’s in on the kitten action, and who can blame it?