The Case Against Trickle-Down Economics for Reducing Unemployment 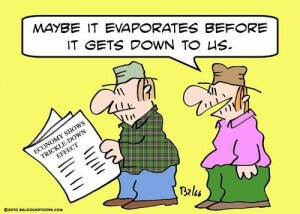 Many politicians, especially those on the right, preach the gospel of Trickle-Down Economics. The theory is that if businesses have more money they will employ more people and therefore it is essential to reduce business taxes. Raising the income of the wealthiest in our society, they say, will make everyone better off.

Ever since the 2012 election season started, the GOP has been insisting President Obama is destroying the economy and the only way to save it is to reduce taxes, especially on business. This rhetoric has only increased in the current election season. There are at least four major pieces of evidence that prove that this is not true though: 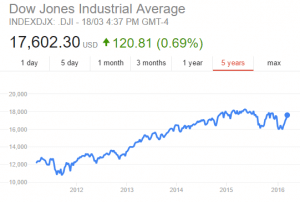 2. After an initial decrease following the GFC, all the stock market indicies have been steadily increasing and are at their highest levels ever. Whether you choose the Dow Jones, the NASDAQ, or the S&P 500, the market is consistently improving.

3. The value of the US dollar has been increasing as its economy has been doing better on average than most of the rest of the world. In order of value, the US’s top five trading partners are Canada, the European Union, China, Mexico, and Japan. The dollar has increased in value against all those currencies.

4. On its own, GDP growth appears to be small in recent years. However, when compared to other members of the OECD, the United States has had very good growth. It is suffering not because of internal issues, but because of ongoing problems in the global economy, especially three of its biggest trading partners – the EU, China, and Japan.

The truth is that currently a majority of US businesses actually have plenty of money. In the second quarter of 2015, FactSet advised that S&P 500 companies (excluding financial companies) collectively had US$1.43 trillion in cash reserves on their balance sheets. As CNN Money pointed out, “Corporate America has more cash than the economies of Belgium and Sweden combined.” That is apparently the second highest it had been in the previous ten years, and the highest was just two quarters earlier – the last quarter of 2015. 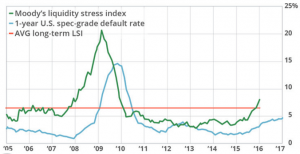 And they have no reason to worry about spending it either. Moody’s Liquidity Stress Index for the US and Canada (for companies rated B3 or higher) shows that 97.4% currently have enough liquidity to cover their cash needs for the next year. This is up from 96.6% from the previous survey, conducted in 2011. MarketWatch reports that 70% of the companies that are in trouble are oil and gas companies due to the low international prices for those commodities.

These companies are not using the trillions they already have to employ more people and there is no reason to expect that giving them even more would change things. There’s a good reason for that too – as pointed out above, they don’t need any more employees.

The current problem in the world economy is lack of demand, not lack of money. People simply aren’t spending. If manufacturers, for example, employed some more people all that would happen is they would create a big stockpile of whatever product they make. It is more than likely that would lead them to lose money – potential extra costs would include the cost of storage and having to sell the product at a reduced price to get rid of it.

When the economy stalls like this, the government can make a difference, but it must intervene at the point that is causing the problem. As I said, currently that is lack of demand, not (as tax-cut advocates would have everyone believe) lack of money. Only an increase in demand will lead to the conditions that will cause businesses to increase employment. 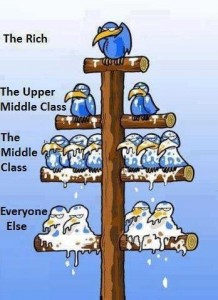 So how does a government make people spend money?

1. Increase social security payments. This always provides an immediate increase in demand as most recipients of social security payments live week to week and struggle to live within their income. Therefore any extra money is spent immediately, increasing demand. This in turn causes employers to employ more people to match the demand. As this works through the economy, people come off social security and into paid work. That in turn reduces the overall cost of those payments and increases average incomes.

2. Increase the minimum wage. I wrote about this at length here. Basically, it works the same as increasing social security payments.

3. Decreasing taxes on low- and middle-income earners. This provides an increase in income and works in the same way as the two options above.

4. Increase spending on infrastructure, both new and maintaining the old. This option would be a particularly good one for the United States at the moment. In fact, I would go so far as to say it would be irresponsible for the government not to do this. There has been insufficient spending on infrastructure for years, and interest rates are at record lows. The longer maintenance is deferred, the more it costs, and it would be far better to borrow money now at low cost than for the next generation to have to do it when the cost of both the finance and the repairs are much higher. Further, the US’s failure to invest in infrastructure is getting to the stage where it’s damaging its potential. The US currently has only one port capable of servicing the new supertankers (Louisiana) for example.

Unless it has cash reserves (which the US government doesn’t), governments need to borrow to finance whatever option/s it chooses. However, this is exactly the same as a business borrowing money for a new machine that will make it more money in the future – the government is borrowing money to invest in the building blocks of its economy to increase the income for both itself (tax revenue) and its people.

Governments do need to be careful when utilizing any of these options because they can lead to excessive inflation and a large debt burden. However, at the moment other governments are willing to lend money to the United States at extraordinarily low interest rates because they see the country as a safe bet, making borrowing an attractive option. 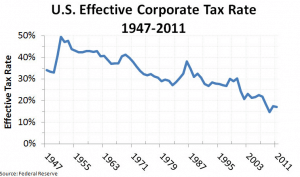 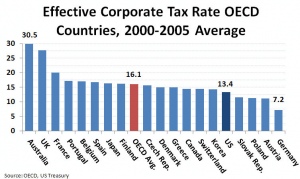 In 1954 the top marginal rate for personal taxes in the US was 91%, and by 1975 that was still 70%. Business taxes have been decreasing for decades and as can be seen by the graph above, have always been lower than personal taxes. In addition, the percentage that businesses have contributed to the overall tax rate has continued to decrease. Also, despite constant complaints that business tax rates in the US are the highest in the world, that actually isn’t true. The effective corporate tax rate in the US, which is corporate taxes/corporate surplus, is well below the OECD average.

The corporate tax rate is not too high – it is not high enough. Reducing it will not create employment. It will make the current economic problem worse because it will take money out of the economy and put it into the hands of a few businesses who don’t need it. The current economic situation will be made worse by the policies of all those candidates who propose reducing taxes on business.