Why Increasing the Minimum Wage is Good for the Economy

Whenever the level of the minimum wage is discussed, there are those who predict that increasing it will lead to mass unemployment, and even those who say there should be no minimum wage at all – to let the market sort it out. Those people say leaving wage levels to be set by the laws of supply and demand will lead to fair wages for both employers and employees.

Both of these arguments are wrong. As long as the level of increase is kept to no more than around two percentage points above the rate of inflation, an increase in unemployment is extremely unlikely to occur. In fact in the current economic conditions (i.e. insufficient demand), it is likely to be good for the economy and lead to a reduction in unemployment. As for letting the market set wages that is extremely unfair, especially to employees, and creates an unnecessary potential point of friction between them and employers. Here’s why:

Why Have a Minimum Wage?
At the microeconomic level, a minimum wage is useful in protecting citizens. In an employer/employee relationship, the employer usually has all the power. Employers are in a position to dictate wages, and often the only option an employee or potential employee has is to resign or not take the job if they don’t like what the wages they’re offered. Most employees though are heavily dependent on their income from their job, and are often supporting a family too. They are simply not in a position to turn down a job because they don’t like the wage level. Even the best employers will usually try to rein in costs as much as possible. Further, those likely to be competing for minimum wage jobs are those that are most vulnerable to being exploited e.g. young people, women, those with low education levels, minorities, and those for whom English is a second language.

At the macroeconomic level, having a minimum wage is a useful tool for governments:

1. When a government announces an increase in the minimum wage it is a declaration of confidence in the economy. Such signals help in sending a positive economic message and set a positive economic tone. Businesses are encouraged by such messages to invest in the future of the country.

3. An increase in the minimum wage stimulates the economy more quickly than any other tool at a government’s disposal. People on low incomes live week to week, and rarely have money to spare, Therefore, when they receive any increase that money makes its way into the hands of businesses immediately, stimulating demand and therefore increasing employment opportunities. Because of the way this process works, the extra money in the economy more than offsets the higher wage costs. (This is complicated to explain, and will take a post on its own.)

There is an argument that those on minimum are wage are young people just starting out and don’t need as much money as the rest of us. I’ve heard this multiple times from commentators on Fox News. The graphic below is from the United States in 2014, but I would expect the figures to be similar to countries like New Zealand, Australia, Great Britain, and Canada, which all have similar economies and societies. 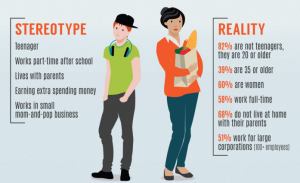 Why Will Increasing the Minimum Wage Not Lead to Unemployment?
The argument of those opposed to increasing the minimum wage is this: it increases the cost of producing goods and services and therefore in order to maintain costs, business people need to make a corresponding decrease in staff. Therefore it will lead to massive unemployment.

However, it is simply illogical to assume that an increase in wages will lead to a corresponding decrease in the rate of employment, and I consider such an argument fearmongering. Employers do not automatically cut staff levels to maintain the same wage bill as they had before the increase, and there are many reasons for this.

The assumption itself is also unsound because it assumes that all inputs (e.g. staff, raw materials, buildings) used in producing a particular good or service are equal and interchangeable. This is obviously not the case. The mix of inputs is like a recipe – it can be adjusted to suit individual tastes, but you can’t just swap one ingredient for another, or leave it out altogether, and expect the results to be the same. Also, some inputs are easier to change than others, and some are more important than others.

When the price of an input rises (in this case wages), a business person does not simply change it for another cheaper input, or stop using that input altogether. In fact, this is rarely even possible given the unique contribution most people make. If the price of a raw material increases, it may be possible, for example, to source that input from elsewhere at a better cost. People though, are different, and there are many reasons why a wage increase will not lead to staff dismissals. Some of these are:

1. When a businessperson is facing an increase in the cost of any of their inputs they will try to find a way to ameliorate that increase. Economic models that assume a rise in the price of labour will lead to less labour being used are not just simplistic, they are stupid. When calculating costs, not all are considered equally – they are weighted. Most businesspeople recognise that their staff are their most valuable asset. When an increase in the cost of labour affects profitability, the response of most is not to reduce the number of staff because they are too important to the business. If they cannot absorb the cost, they will almost always either try to reduce costs elsewhere.

2. Most employers are actually quite loyal to their staff, and dismissing employees is something they do with difficulty, even when it is deserved.

3. The human contribution to the production process is rarely interchangeable with another input. If a person can be replaced by a machine, for example, the wage increase has simply speeded up the inevitable in that particular business. At the same time, it will increase the demand for the machine and so in another business the situation leads to more employment. This is, or should be, part of a normal, dynamic economy.

4. Most businesses are small, which makes the unique contribution made by a particular person even more difficult to do without. If there are only five staff, for example, getting rid of one and spreading their duties amongst the remaining four is unlikely to be possible. If it is, losing the fifth person was inevitable and a wage increase is an excuse, not a genuine reason, for a dismissal.

5. Usually, the human contribution to the business overall is essential. A business simply cannot meet demand for its goods or services with any reduction in staffing levels. If a wage increase cuts into profit too much, or leads to unprofitability, the only option is to increase the price of the good or service.

6. Sometimes wage increases will lead an employer to dismiss higher paid employees and replace them with lower paid ones. However, employers who do this are short-sighted. In most cases this is unlikely unless the higher paid employee is being paid more than they are worth. Employers value trained and experienced staff over those who are untrained and inexperienced. This is why young people bear the brunt in economic downturns – the cost of training them in both time and money is much higher, and they are generally less reliable. It is also why employers prefer more educated staff even when that level of education is not required for the job – it proves a person’s ability to learn and means they will learn the job more quickly. 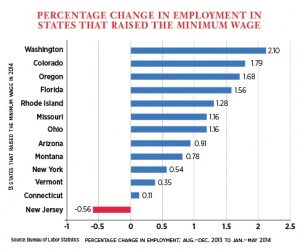 The Nation looked at the evidence in the United States state-by-state. Like most of developed the world, the reason the economy isn’t expanding there currently is lack of demand. The evidence shows that in all but one case the states that raised their minimum wage had an increase in their employment rate. The one state that didn’t, New Jersey, is continuing to suffer from insufficient investment following Hurricane Sandy in 2012. Washington, at the top of the list, has had the highest minimum wage in the US for fifteen years. On average, the study showed that states which increased their minimum wage had a bigger rise in employment levels than those that didn’t.

… the hourly wage a worker needs to pay for the necessities of life and participate as an active citizen in the community. It reflects the basic expenses of workers and their families such as food, transportation, housing and childcare, and is calculated independently each year by the New Zealand Family Centre Social Policy Unit.

The New Zealand Living Wage Movement currently lists only 46 employers who have pledged to use the Living Wage instead of the minimum wage. Most of them are unions. Two political parties – Labour and the Greens (our second and third biggest parties respectively) – deserve credit for being part of the group. However, there are several businesses on the list too, which are the ones that impress me the most. I’ve seen an interview with the staff and management of one of those businesses, and it seems to me that having their wages linked to the Living Wage rather than the minimum wage certainly makes for a happier, more productive workforce.

The Conclusion
Although I have painted a positive economic picture of increased employment rates correlated with increasing the minimum wage, these relate to the current economic conditions throughout the world of lack of demand. While I personally will always advocate for a higher minimum wage because of the negative effects of Income Inequality (that’s another post!), it isn’t true that increasing the minimum wage will always reduce unemployment.

As The Nation points out:

In 2010, three economists looked at 1,381 counties over sixteen years, finding that minimum-wage hikes had no effect on employment. Other economists looked at every state-level minimum-wage increase over twenty-five years at times when unemployment was already high and found no evidence of an effect on job creation. Yet another group looked at the effect of state-level increases on teenagers—canaries in the coal mine of low-skilled employment—and found zero impact on their jobs. 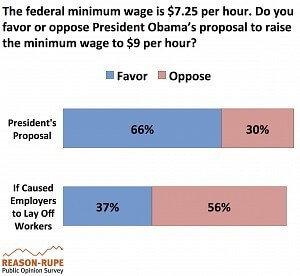 Whether or not increasing the minimum wage will also increase employment is dependent on current economic conditions. There is no evidence that it decreases employment however, and that common argument is one that cannot be backed up by real-world evidence. This reason though is frequently used by politicians who oppose increasing the minimum wage. It is obvious why this is when the graph to right is studied. Even if they don’t understand the economics, must people want the poor to have more money. But, if they’re convinced that it would lead to people losing their jobs their support reduces significantly.