I’ve written about the appalling justice system in Saudi Arabia before in The Injustice of Sharia in Saudi Arabia and also specifically about the case of Raif Badawi, a blogger serving a sentence of ten years and 1,000 lashes simply for disagreeing with the type of governance that prevails in the country.

More and more, people have begun to compare the fact that there is little difference between the justice system in Saudi Arabia and DAESH-controlled territory. Here are some of the images being used to do that: 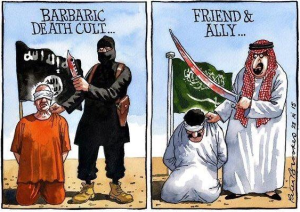 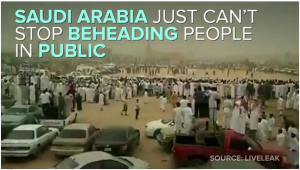 Following an article in a pro-government newspaper there in which Saudi Arabia is apparently threatening to sue people who compare them to DAESH, a Saudi Arabian human rights group has posted the following on Movements™, an organisation that crowd sources human rights campaigns:

Join us in the Campaign #SueMeSaudi. From the PRO Government Newspaper Al Ryadh “Questioning the fairness of the courts is to question the justice of the Kingdom and its judicial system based on Islamic law, which guarantees rights and ensures human dignity,” the source told the pro-government newspaper. They claimed the Kingdom’s courts would not hesitate to put on trial “any media that slandered the religious judiciary of the Kingdom”. in Arabic “وبين المصدر بأن قضاء المملكة يطبق أحكام الشريعة الإسلامية وفق معايير عدلية دقيقة وضمانات قضائية كفلتها أحكام الشريعة الإسلامية وأنظمة المملكة المرعية، والتشكيك بعدالة الأحكام الصادرة عن المحاكم هو تشكيك بعدالة المملكة ونظامها القضائي المرتكز على الشريعة الإسلامية التي كفلت الحقوق وضمنت كرامة الإنسان.” The Kingdom, a close UK ally, has executed 152 people in 2015. It is the highest number on record since 1995, according to Amnesty International. 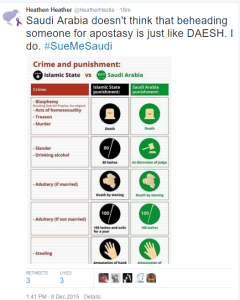 You can also share the post at the Movements™ website directly to Facebook and Twitter. I hope some of you will consider taking part in this campaign. It is a joke to call the justice system in Saudi Arabia, based on Sharia, a “justice” system. We in the West have for too long ignored that for political reasons. Hopefully if more people speak up about this, it will put enough pressure on politicians for them to address this issue at a diplomatic level.