It was announced on Thursday that Raif Badawi won the European Union’s Sakharov human rights prize. The Guardian reports : 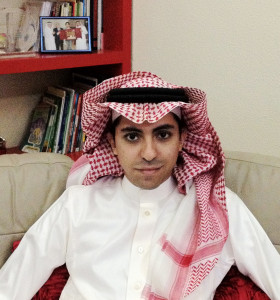 Raif Badawi, the Saudi blogger and activist sentenced to 10 years in prison and 1,000 lashes for insulting Islam, has won the EU’s Sakharov prize for human rights.

The announcement was greeted on Thursday with a standing ovation at the European parliament in Strasbourg, France, but will be seen by Saudi Arabia as another diplomatic slight at a time when its domestic and international policies are coming under growing criticism.

Martin Schulz, the European parliament president, said: “I urge the king of Saudi Arabia to free him [Badawi], so he can accept the prize.”

Named after the Soviet scientist and dissident Andrei Sakharov, the award was created in 1988 to honour people and organisations defending human rights and fundamental freedoms. Badawi was one of three nominees this year, along with the Venezuelan opposition movement Mesa de la Unidad Democrática and the assassinated Russian opposition leader Boris Nemtsov.

“The European parliament has sent today a strong political and humanitarian message to Saudi Arabian authorities,” said Guy Verhofstadt, leader of the Liberal bloc. “We urge His Majesty King Salman to release Raif Badawi from prison and in any case to end the barbaric punishment of flogging.”

Raif Badawi was sentenced to ten years in prison plus 1,000 lashes for the crime of writing a blog that questioned the way his country was run. According to raifbadawi.org, he was “charged with ‘setting up a website that undermines general security’, ‘ridiculing Islamic religious figures’, and ‘going beyond the realm of obedience’.” There have been attempts to get apostasy added to the charges, which would carry a death sentence, although these have so far been unsuccessful. The 1,000 lashes were to be carried out in front of the main mosque in Jeddah each week after Friday prayers. Personally, I find this particular aspect of his punishment revolting in the extreme.

Badawi received the first fifty lashes of his sentence back on 9 January this year, despite multiple calls from other countries and international agencies not to proceed. He was transported from his prison by bus to the square in front of a mosque in Jeddah. As Friday prayers ended, a uniformed man with a cane began to hit him across his bared back, and didn’t stop until he’d whacked Badawi fifty times. The same 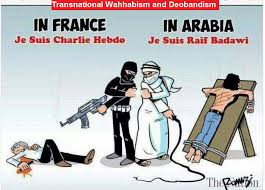 thing was supposed to happen every week, same place, same time, until the sentence of 1,000 lashes had been carried out. The only reason it hasn’t is a sick nod to humanitarianism – the first quota left him too ill to undergo further sessions.

On the same day that that Badawi’s first batch of lashes were administered, the Saudi minister of state for foreign affairs, Nizar Madani, was in Paris. There, he linked arms with other senior politicians from all over the world in support of freedom of speech in the ‘Je Suis Charlie’ (I am Charlie) march that followed the massacre of nine staff of the Charlie Hebdo magazine. I’m all for diplomacy, but the hypocrisy of that disgusted me. It is the extremism of Wahhabism that is the reason Raif Badawi is in prison undergoing corporal punishment for questioning his government, and some are trying to turn that into a death sentence. It is the export of Wahhabism from Saudi Arabia that has infected some people and led them to actions such as those of the brothers who thought murdering a bunch of cartoonists was a sacred act that would be lauded by their god.

According to Amnesty International, Saudi Arabia is the third most prolific state killer in the world, surpassed only by China and Iran. They report that the use of the death penalty has soared under the new king, Salman. In 2014, 90 people were executed; 102 have been executed in just the first six months of 2015. Further, more than half of those executions were for non-lethal crimes including adultery, armed robbery, apostasy, drug-related offences, rape, witchcraft and sorcery. Also, people with mental disabilities are not spared if convicted of a crime that attracts a death sentence, and neither are children.

I gave some examples of the appalling treatment of women in the Saudi justice system last time I wrote about that country. The 2014/15 Amnesty International Annual Report states of women’s rights in Saudi Arabia: 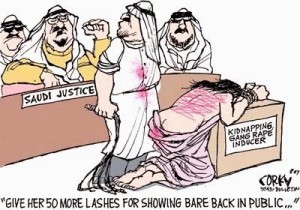 Women and girls remained subject to discrimination in law and practice. Women had subordinate status to men under the law, particularly in relation to family matters such as marriage, divorce, child custody and inheritance, and they were inadequately protected against sexual and other violence. Domestic violence reportedly remained endemic, despite a government awareness-raising campaign launched in 2013. A 2013 law criminalizing domestic violence was not implemented in practice due to a lack of competent authorities to enforce it.

Raif Badawi has become one of the main faces of the End Blasphemy Laws campaign established in January of this year. The focus of that campaign has been to try and force secular democracies like New Zealand, which still has a blasphemy law, to repeal those laws. The fact that we still have a law that can result in a two year prison sentence for insulting religion completely destroys our moral authority when we complain about those laws being enforced elsewhere.

In reality this award for Badawi is a bit of a case of one step forward and ten steps back – those ten steps in this case being fifty lashes of the whip. Badawi’s wife Ensaf Haidar, is now living in Canada (they gave her political asylum) with their three children (Terad, Najwa and Miriam). She says she has heard from a reliable source that her husband is now well enough to receive the second allocation of fifty lashes. They were due to be administered on Friday, but appear to have been delayed again. All the previous delays were due to his health, but she does not know if this is the reason they have been delayed again. Her opinion is that he could not survive another fifty lashes.

It is about time the international community put more diplomatic pressure on Saudi Arabia to reform its judiciary. If this is done in the right way, it may result in positive change, so I see this award as a good move. 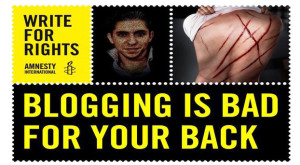