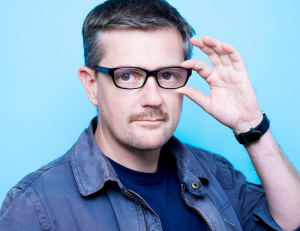 Charlie Hebdo was, at the time of the multiple murders by Islamist terrorists in January, on the verge of bankruptcy. The politically correct left as well as religious extremists the magazine criticized had joined forces to attack it. In France, just like in many other Western countries, it is simply not de rigueur to criticize Islam. This was damaging the ability of Charlie Hebdo to survive financially. They had previously had to close down for a time, and were looking at that possibility again. Too many of their fellow liberals in particular had the warped idea that freedom of speech didn’t apply if someone complained that speech offended them, especially of those offended were Islamic fundamentalists.

In the book, Charbonnier hits back at his critics on the left, as well as those on the right, in religion, and in politics, especially from the Sarkozy years. Of course, it is his comments about Islam that are gaining the most attention. He made the point myself and many others have made that criticizing Islam is not the same as criticizing Muslims, and Islam should not be exempt from criticism because of the threat of violence and murder.

Charbonnier has always said his criticism of Islam is specifically related to Islamism, and I have never seen any evidence that isn’t the case. He writes in the book:

… the problem is neither the Qur’an nor the Bible … but the faithful who read the Qur’an or the Bible like one would read the installation instructions of an Ikea shelf.

As might be expected from the title of the book, his most stinging attack is on those on the left that call all criticism of Islam Islamophobia. In a section entitled, L’islamophobie, un concept mal taillé (Islamophobia, a badly conceived concept) he wrote:

If it means that we can laugh at everything, except for certain aspects of Islam because Muslims are much more susceptible [to offence] than the rest of the population, what is that, if not discrimination? It is time to end this disgusting paternalism of the bourgeois intellectual white ‘left’ that looks to identify with the ‘poor unfortunate under-educated.’ “

(From an article by Henry Samuel in The Telegraph)

Seeking to explain what he saw as intellectuals’ condescension masquerading as solidarity, Charb [Charbonnier’s nickname] writes: “Since I am educated, I understand that Charlie Hebdo is using humour. But out of respect for you [Muslims], since you haven’t yet discovered second-degree humour, I will denounce these Islamophobic drawings that I pretend not to understand. I will put myself at your level to show that I love you.

“These ridiculous demagogues just have a huge need to be the centre of attention and want to satisfy their formidable fantasy to dominate others.”

This is beautiful, and exactly what we would expect Charbonnier to say. Since his death, his best known quote (from 2012) has become:

I’d rather die standing than live on my knees. 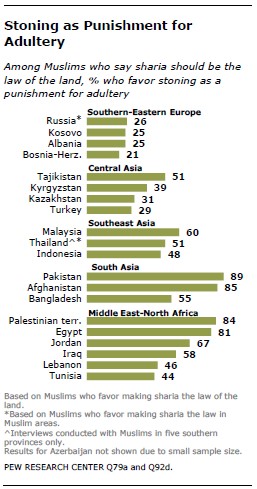 I hope the ridiculous SJWs (Social Justice Warriors) will finally listen. Like most of you reading this, I’m lucky enough to live in a Western democracy where I can take my right to freedom of speech for granted. Some of us though are old enough to remember when things like sexism, racism, homophobia, anti-Semitism and the like were fairly common. Enough of us spoke up against those things that they are no longer socially acceptable. It was only by challenging the norms that this happened. Nowadays, too many have forgotten what real social justice is. While they’re worried about people criticizing Islam, they’re forgetting individual Muslims who live in regimes where women are second-class citizens and being gay or atheist attracts a death sentence. Check out the graph on the right – there are still tens of millions of people who believe stoning is an appropriate punishment for adultery.

There are always some who will find something to attack of course. Although usually pretty good at standing up for the principle of free speech, the American right wing tends to struggle with the idea of praising an atheist, even a dead one. Christopher Dickey of the Daily Beast criticizes Chabonnier’s book, mainly because he doesn’t criticize atheism just as much as religion – he finishes his column with the words:

But the scale of atheist terrorism in the 20th [century], from Stalin to Pol Pot cannot be brushed aside as lightly as that. The fact is, fanaticism is not limited to those who believe in … God, Allah or YHVH. Ideologies, too, have their true believers, and they, too, should be skewered by cartoonists like Charb, may he rest in peace.

As soon as someone starts calling something “atheist terrorism” just because the atrocities were carried out by an atheist, you know either their intelligence or logic are faulty, or they’re brainwashed by religion. Like the illiberal liberals, he just can’t help himself.

His criticisms throughout the article completely miss the mark. For example, he writes:

Charb writes with contempt … about the religious groups, both Muslim and Catholic, that took Charlie Hebdo to court in the past. Why would they need to do that if they truly believed punishment would come in the afterlife, he wonders. Why would “God, the creator of the world, the guy with the big shoulders who plays with our planet like a driver stopped at a red light plays with his boogers” need a lawyer to defend him from cartoonists?

My opinion is Charbonnier has it completely correct here, and I really can’t see what Dickey’s problem is. Why does God/Allah/Yahweh, an omniscient, omnipresent, all-powerful being need earthly help? If He wanted Charlie Hebdo stopped, surely He was perfectly capable of doing so. The religious extremists who sought to do that, have instead guaranteed the magazine’s survival.

(And while I’m at it, what is it with all these writers who never knew him suddenly deciding they can call him “Charb”?) 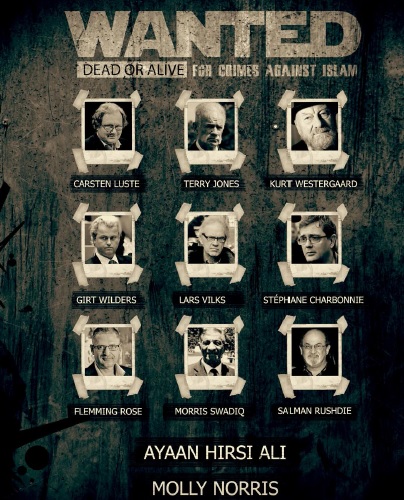 Charbonnier’s critics had not only tried to stop him via legal processes, but illegal ones too. This poster was published in AQAP’s (Al Qaeda in the Arabian Peninsula) magazine Inspire in March 2013. You can see Charbonnier there on the centre right. He commented at the time (from the Daily Beast article referred to above):

On this poster, I am in more or less good company: there is the inescapable Salman Rushdie; the Dutch extreme-right leader Geert Wilders; Flemming Rose, the editor of the cultural pages of the Danish Jyllands-Posten, at whose initiative the caricatures of Muhammad were published; Terry Jones, a completely crazy American pastor who burned Qurans, and other happy laureates.

And referring to to other “artwork” in Inspire but not displayed here he said:

So that those listed understand well what’s waiting for them, a smoking pistol is shown to the left of the Nazi pastor, on his right, a splash of blood. This clever montage is entitled ‘Yes We Can,’ and under it you can read, ‘A bullet a day keeps the infidel away.’ And finally: Defend the Prophet Muhammad, peace be upon him.’”

I’m not sure why Ayaan Hirsi Ali and Molly Norris don’t get to have their pictures on the poster. Maybe fundamentalist Muslims are like ultra-Orthodox Jews and can’t look at pictures of women. (See Jerry Coyne’s article: Ultra-orthodox Jewish newspaper doctors photos of Charlie Hebdo rally to remove women.)

After the murder of Charbonnier and his colleagues, this appeared on Twitter accounts believed to be linked to AQAP: 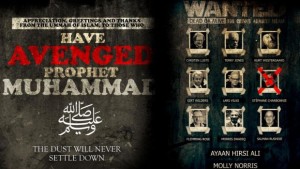 This is the people that the far left don’t want us to criticize. Whenever you say “but” after you say “I believe in freedom of speech”, you are justifying this behaviour. When the Pope says he would punch someone who criticized his mother, he is justifying violence for hurt feelings. There is no excuse for violence. Yes, you have a right to be offended by, but you do not have a right to turn that offence into violence. The battle of ideas should never be fought physically.

I’ll give Charbonnier the last words: 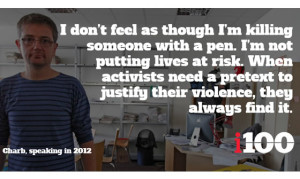