2016 has been Putin’s year. He has succeeded in much of what he wants. He tells himself it’s about Making Russia Great Again. In reality, it’s about Putin himself. The Russian people are suffering and because of Putin, so are millions of others. And it’s going to get worse before it gets better. 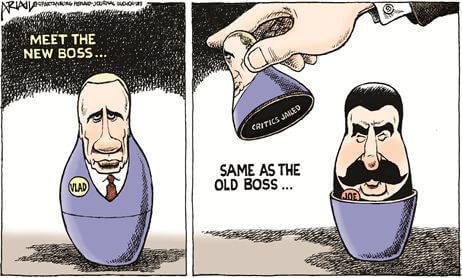 Putin has been the face of Russia since 2000. Since then, he has changed his country’s constitution to both retain his power and extend it. Early in his tenure he enhanced the lives of his people, but greed and a love of power have taken control.

In the West, the most oft-quoted of Putin’s words are from a 2005 Kremlin speech in which he ” … characterized the collapse of the Soviet Union as the ‘greatest geopolitical catastrophe of the Twentieth Century’.” (Wikipedia) These words are quoted for good reason: they provide a good insight into what motivates Putin. Most of his actions on the international stage since then have been about regaining international respect for Russia. The problem is, Putin has the belief that aggression is the way to achieve that.

Putin’s attempt to gain respect will not work long-term. Amongst those he wants recognition from the most, he is only increasing distrust and disgust. His military ventures are also damaging the economy of his country. So far, he has maintained the support of ordinary Russians. That looks like it could change in the near future.

Putin was elected in 2000 on a promise to reform his country’s economy, which had gone steadily downhill since the break-up of the Soviet Union. He negotiated the so-called “Grand Bargain” with the Russian oligarchs which saw a significant increase in government coffers. Putin improved the lives of ordinary Russians following his re-election in 2004. He launched a series of National Priority Projects. These improved healthcare, education, housing and agriculture. They also enhanced Putin’s popularity.

However, Putin failed to diversify his country’s economy or put the increased revenues into self-sustaining projects such as was done in Norway and the Shetland Islands. Russia relied on, and still does, oil and related products for around two-thirds of their export income. Thus, with the Global Financial Crisis in 2008 and the fall in the price of oil, GDP per capita took a big hit.

At the same time, Putin’s military ventures in Georgia, Crimea, Ukraine, and Syria, and the ongoing cost of supporting Transnistria, are costing the country dearly.

Russia also has extensive international economic sanctions to contend with. They need international help to drill their oil, for example, as they are unable to make all the equipment themselves. One of the real reasons Putin wanted Crimea was not protection of ethnic Russians. It was the oil just off the coast. He has been unable to drill that due to the sanctions. Thus, like Transnistria, Crimea has become a drain on the Russian economy. 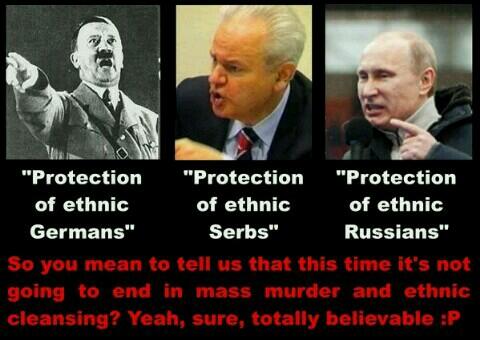 The Economy and the Russian People

In the past, Putin has always maintained huge foreign reserves. Russia also has a strong positive trade balance. However, he has been spending this money hand over fist since he began interfering militarily in Ukraine. The spending has increased greatly since he became more active in Syria. He protected ordinary Russians (and maintained his personal popularity) from the worst of the economic crisis by using the reserves. However, in just two and a half years, those reserves have shrunk by two-thirds. Things are now so bad, it is hitting ordinary Russians in the pocket. Forbes reported in November:

While the depleted funds have been used to bolster the hemorrhaging national budget, the larger economic crisis has plunged millions into poverty and all but eliminated the gains in living standards made in Russia in recent years.

Russia’s “rainy day” plan, the Russian Reserve Fund (RRF), is among the hardest hit. Estimates now predict that the RRF may become insolvent as early as this year [i.e. 2016]. Although the Finance Ministry is taking steps to avoid such an outcome by selling foreign currency to finance the budget, federal expenses are still depleting reserves at an alarming rate.

Increasingly, average Russians are feeling the pinch. A recent survey by Dozhd TV, one of the country’s last remaining mostly-free media outlets, found that some 74% of Russians recognize that there is an economic problem within the country. An equal number believe price inflation represents the most significant problem they face, while half of respondents (49%) believe poverty to be the most pressing, and almost as many (43%) identified unemployment as the most acute issue. And while Russia’s increasingly authoritarian political climate makes opinion surveys notoriously unreliable, the findings nonetheless suggest that trouble could be brewing for Mr. Putin’s government.

Freedom of the Press and NGOs

Early on, there were few who noted there was a dark side to Putin’s rule. Those who did tended to disappear. Russia is 148th out of 180 countries on the 2016 Reporters Without Borders World Press Freedom Index. Their 2016 comment on press freedom in Russia reads:

What with draconian laws and website blocking, the pressure on independent media has grown steadily since Vladimir Putin’s return to the Kremlin in 2012. Leading independent news outlets have either been brought under control or throttled out of existence. While TV channels continue to inundate viewers with propaganda, the climate has become very oppressive for those who question the new patriotic and neo-conservative discourse or just try to maintain quality journalism. The leading human rights NGOs have been declared “foreign agents.” 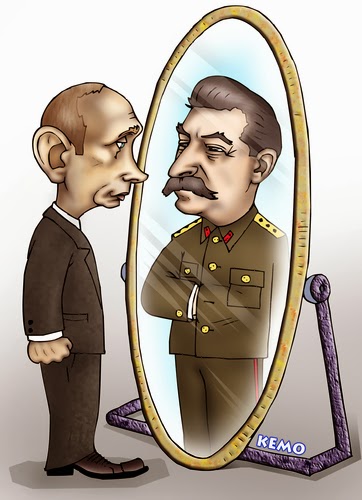 On 1 January 2017, the Moscow Times reported that the Russian Justice Ministry has declared yet another NGO (non-government organization) a “foreign agent” and blacklisted it. The SOVA Centre is a think tank that conducts research in areas such as nationalism, xenophobia, and racism. The Justice Ministry also declared the Levada Centre, the only national polling agency considered independent a “foreign agent” earlier in the year. The Moscow Times reports there are currently more than 80 NGOs blacklisted as foreign agents in Russia.

More and more, Putin’s Russia is either forcing independent actors out of existence or bringing them under the control of the government.

Allegations of corruption have dogged Putin’s political career. Prosecutors investigated him in the early 1990s when he was an official in the St Petersburg administration. They recommended his dismissal. For unknown reasons this didn’t happen. Further, prosecutors mysteriously dropped a criminal investigation in which he was a suspect a few months into his presidency. According to Wikipedia, four months after that “… yet another case … was dropped “for lack of evidence”, in spite of thousands of documents passed by Swiss prosecution.”

Russia is one of the more corrupt countries in the world, and that hasn’t improved under Putin’s leadership. 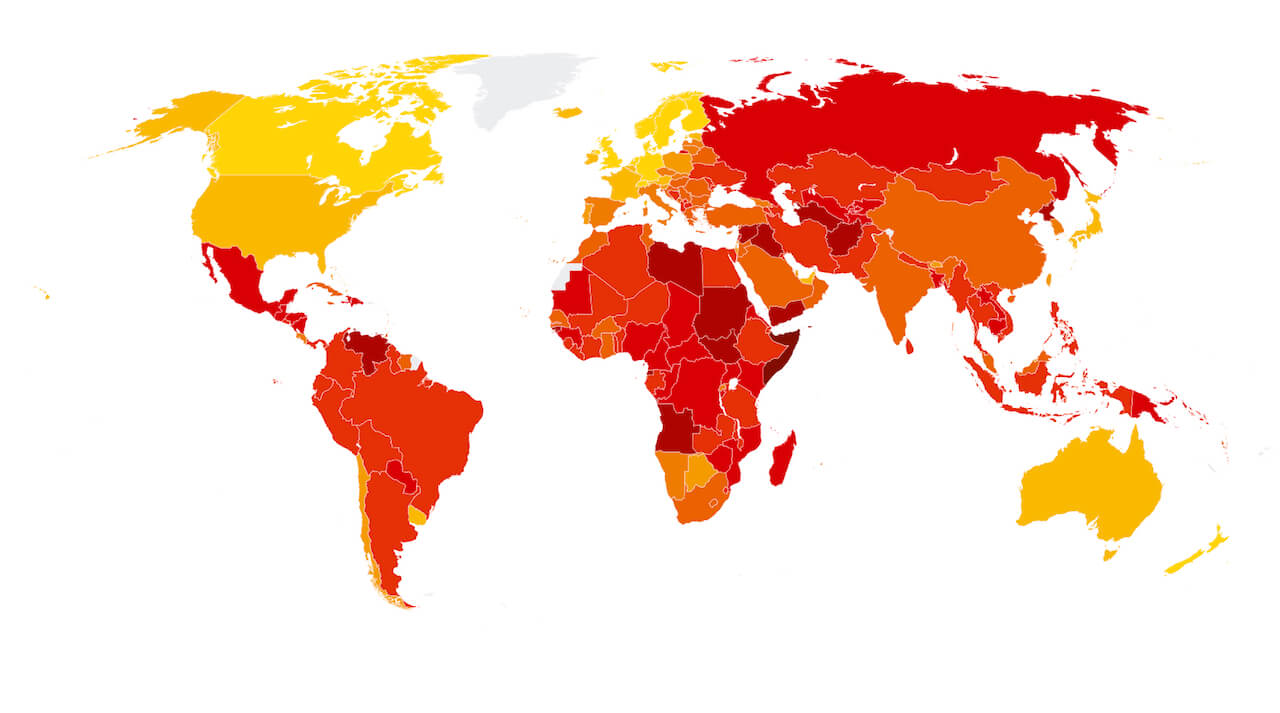 2017 Corruption Perceptions Index. The lighter the colour, the lower the level of corruption perceived. (Click graphic to go to source and interactive map.)

Putin showed his attitude to corruption with a new law in early 2015. It slashed the penalties for a corruption conviction. For example, previously, the fine for taking a bribe was fifteen times the amount of the bribe. The new law reduced it to five times the amount.

Russia has become more and more conservative under Putin’s leadership. Early in his career, religion does not seem to have been important to him. However, his mother had him secretly baptized into the Russian Orthodox Church as a baby. In the 1990s he appears to have had some sort of born-again moment after surviving a car crash and house fire. Since then, this has changed.

The Russian Orthodox Church is extremely conservative, and informs much of social policy. This is most easily seen in the country’s anti-gay laws.

Conservative religious attitudes to sexuality bolster anti-gay laws. At the same time, there has been an effort to increase Russian nationalism. The two combine in the national consciousness to equate being gay with being anti-Russian. Russia routinely bans gay pride rallies. In 2011, the European Court of Human Rights fined them for banning 164 pride events and marches between 2006 and 2008. Russia quietly paid the fine and continues to ban them.

Mic.com did an excellent analysis of Russia’s anti-gay laws in 2013. It notes that the basis of Putin’s war on gays is Article 6.21. They report its wording thus:

In November 2015, PinkNews reported that some want to extend the law to cover all public displays of affection between gay people. The Bill does not appear have gone to the duma yet. The politician who drafted the Bill, Ivan Nikitchuk, said to Russian newspaper Izvestia (Известия):

(Google translation from Russian, with a little tweaking.)

“I think that the problem … is an acute and topical one, as it affects the social ills of our society and is primarily concerned with the moral education of the younger generation… Unfortunately, the … wording adopted in 2013 … which prohibits propaganda of homosexuality proved to be insufficiently effective, so we propose a new measure.”

Nikitchuk says … homosexuality, “is a huge threat to every normal person, which can affect children or grandchildren …

“And as in the biological sense … is ultimately the same as that of death; homosexuality is a mortal threat to all humanity.”

Even the Russian Orthodox Church surpassed themselves earlier this year though. In August NGO Russian Justice Initiative (RJI) released a report on FGM in majority-Muslim villages in the Caucasus. In showed the practice was common in the region. A leading Muslim cleric from the area, Ismail Berdiyev, said:

All women should be circumcised so there would be no debauchery on earth, so that sexuality is minimized. The Almighty created woman to bear and raise children. [FGM] would not affect that. Women would not stop giving birth. But there would be less promiscuity.

According to The Telegraph,

He went on to clarify that although Islam does not prescribe the practice, “it is necessary to reduce female sexuality. If it was done to all women, it would be very good.” 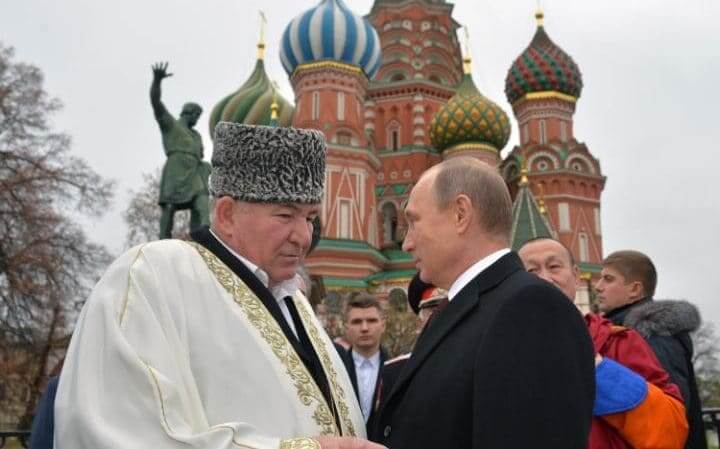 The comments caused outrage in Russia. However, senior arch-priest and former church spokesperson Vsevolod Chaplin took to Facebook and announced his support for Berdiyev. The Guardian summarized Chaplin’s post thus: “traditional practices should be allowed to continue without interference.”

Meanwhile, some activists claim the RJI report into FGM was politically motivated as it was released just weeks before the parliamentary elections.

(Chaplin later deleted his post and denied he’d ever written it. Berdiyev withdrew his initial comments, but made new ones about women’s main role being childbearing.)

The majority in Russia do appear to accept that FGM is widespread in Dagestan and is part of the appalling record of women’s rights in the area.

Putin increased his international visibility in 2016. He is intervening militarily in Ukraine and Syria, and increasing his activity on the borders of the Baltic states. His interference in the elections of (at least) Ukraine, Germany, France, and the United States in well known. This has all made him an international player, but no one trusts him which will be a problem for him long-term.

And it all costs. Putin doesn’t have the money to prop up his economy for much longer. He will continue to manipulate his image in the Russian media. Whatever he does though, people will notice they are getting poorer and less of them have jobs. He will have to start paying attention to home if he wants to retain control there. 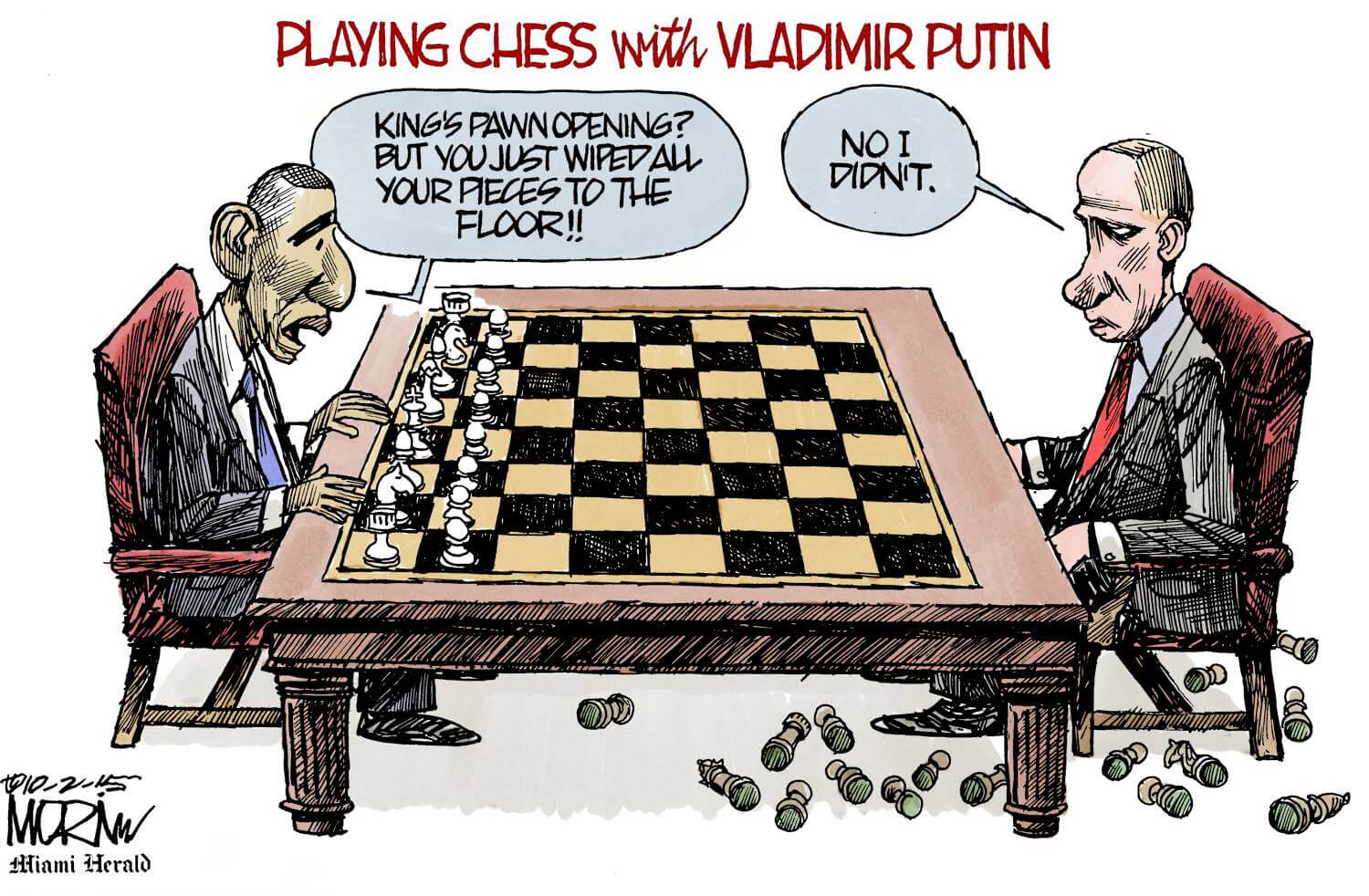