For Putin, a Land Bridge to Crimea is Vital 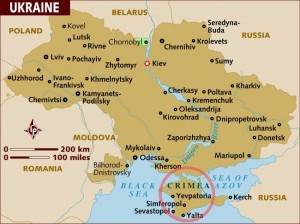 Putin’s regret at the dismantling of the Soviet Union and his desire to lead Russia to a pre-eminent place in world politics is well known. It’s also clear there is little he won’t do to make that happen. His invasion of Ukraine on 21 August is another example of the outrageous and illegal behaviour he has been getting away with for years now, with little opposition from the international community. He has absolutely no compunction about lying about what he is doing either, as evidenced by the ridiculous contention of foreign minister Sergey Lavrov that NATO satellite images of Russian military positions inside Ukraine are stills from a computer game. The scary thing is that such is Putin’s popularity within Russia, and his control of the media there, his lies are believed by a majority of his people.

Since Russia’s occupation and takeover of Crimea, it has been likely that Russia would invade this part of eastern Ukraine. A land bridge from Russia to Crimea is absolutely vital to his interests. Russia has been supporting separatist rebels further north for months with training, weapons, ammunition, money, people and propaganda in the media. Since the rebels accidently shot down Malaysian Airlines flight MH17 on 17 July 2014 killing 283 people using a Buk missile system they could only have obtained and used with the full cooperation of Russia, it has been harder for Russia to justify their support of the separatists. (Russia continues to hold to the story that it was actually the Ukrainian military that shot down flight MH17.) Recently, the Ukrainian Army has looked like it was about to overrun the rebels, and Putin couldn’t let that happen as it is in his best interests to keep Ukraine de-stabilized now that the country has a president that isn’t being controlled by Russian bribes. So he needed to take control of the situation by invading the region that is most important to him.

Let’s be clear, although Putin has been supporting the Ukrainian rebels, he is not too worried one way or another whether that part of Ukraine becomes a part of Russia. As long as it’s at least unstable, he’s happy. The area he wants most is that which runs alongside the Sea of Azov which will give him his land bridge to Crimea. He is likely to treat those people much better than those around Donetsk and Luhansk have been treated because he wants to maintain the illusion that he’s a great guy and they’d be better off being part of Russia. If Putin had let the Ukrainian army win the battle with the rebels, he would’ve lost his leverage over the Ukrainian government and the only thing he had to show for his interference is a Russian economy being severely damaged by sanctions.

According to the World Bank the per capita income in Russia in 2013 was only US$14,612. However, that sounds pretty great to the average Ukrainian whose per capita income is only a third of that at US$3,900. One of his first actions in Crimea was to increase the salaries of government workers to Russian levels – a significant increase. Higher government salaries alone won’t keep the people of Crimea happy though, and Putin needs that land bridge just to get Crimea’s economy back to where it was before he took over. If he doesn’t, his promises to fulfil Crimea’s economic potential won’t eventuate. Crimea has already suffered significantly in economic terms since Russia took over, and if that isn’t fixed, Putin will soon have two million very angry people on his hands. This problem will be exacerbated if the rest of Ukraine achieves economic success from its alignment with the EU.

The land bridge is vital to the future economic success of Crimea. This is because around half of the peninsula’s GDP comes from tourism and up to 70% of workers get at least part of their income from that sector too. However, those tourists have stopped coming. In 2012, 70% of Crimea’s six million tourists were from Ukraine, 25% from Russia, and 5% from the rest of the world. Crimea is now cut off from the rest of Ukraine by tightly controlled Russian military checkpoints, effectively stopping visitors from there, and international cruise ships have stopped docking. For Russian tourists, the attraction of a holiday in Crimea was the ability to drive there in their own cars, or take the train or bus. Now, with the need to go around eastern Ukraine, the trip is two days each way. Only about 10% of tourists fly into Crimea due to high ticket prices and those who can afford to fly usually go to more distant destinations.

Russia has been trying to keep tourist numbers up to counteract these effects. It has increased flights to 136 a day and slashed ticket prices by 50%. The reality is though, it would need to increase flights to 600 a day, which the infrastructure is simply unable to support, to make up the numbers. In any case, Russia can’t afford to keep subsidising the cost of flights, especially as it’s economy is suffering from the sanctions imposed in retaliation for their military support of the Ukrainian rebels. The Kremlin has also started a publicity campaign called “Vacation in Crimea” and is sending tens of thousands of government workers on semi-compulsory subsidized holidays there. Still, when the BBC’s Lucy Ash visited at the height of the tourist season, she estimated that two-thirds of hotel beds were empty.

Sergey Aksyonov, Chairman of the Council of Ministers of the Republic of Crimea, told Lucy Ash Crimeans are happy to put up with a bit of hardship because it is worth it to be part of Russia. It seems to me though that people are unlikely to speak out, and even if Chairman Aksyonov knows what the people think, he likely doesn’t care. The Chairman was enrolled to become a Soviet army officer, but was unable to graduate due to the fall of the Soviet Union in 1989. He allegedly spent the 1990s as a lieutenant known as the “Goblin” for a criminal organisation called Salem. In 2008 he “borrowed” around US$5 million (from a man who has since had to flee the region), and has re-invented himself as a politician. His party, the Russian Unity party, had only three seats in Crimea’s 100 seat parliament before the revolution. On 27 February 2014 he called an emergency session and masked gunmen, who said they were members of Crimea’s “self-defence forces”, confiscated all phones and imprisoned the representatives in the legislative chamber. It was at that session, and in the presence of these armed militia, that Aksyonov was “elected” chairman by most of them, although many have since denied even being there, let alone voting for him.

Now, these same armed self-styled “self-defence forces” roam the streets. Many people say they are confident things will get better, but given the circumstances, it is impossible to tell whether they genuinely believe that. Others say they are living in an atmosphere of fear and are too scared to speak out. Those who choose to retain their Ukrainian passports rather than opt for a Russian passport, have to apply for citizenship in their own country.

So far, there has only been one tourist season with reduced numbers. If tourism numbers are unable to be increased at least to previous levels by next year, the faltering Russian economy will have to subsidize the incomes of two million Crimeans in order to keep them happy. Russia has no hope of doing this without a land bridge between themselves and Crimea.

It is therefore essential to Putin that he gets control of a corridor of land from Russia to Crimea. If he doesn’t, the result could be major unrest in the area, which could end with the people of Crimea demanding a return to Ukraine. Stopping Putin and Russia at this point has the potential to completely unravel his strategy for the region. Further, if Putin is allowed to achieve this, he may become so emboldened he is impossible to stop.