I’m listening to Trump’s address to the troops announcing “his” plan for Afghanistan as I write this. Is it normal for there to be a fanfare before the president speaks like that? If a New Zealand prime minister’s speech had something like that preceding it, he’d be laughed out of office for his pretentiousness!

He’s having to make excuses for changing his mind once again. It’s no surprise he’s doing a turnaround – this is what I thought would happen. I suspect part of the reason the announcement has taken a few days is he had to think of a way to make himself sound good.

The decision, as usual, shows he’s echoing the words of the last person he spoke to. In this case, it wasn’t Steve Bannon this time. The generals have their way, and the US is staying in Afghanistan. This is not a surprise to me. Besides, an abrupt withdrawal would be a mistake in my opinion.

The joke is that Trump is trying to present himself as someone who doesn’t make snap decisions – that he consults all sides and comes to a sound judgment. Before the election he said he’d remove all troops immediately. Now he’s blaming the need to stay in Afghanistan on previous presidents and telling us he’s a “problem solver”. This man has created more problems for his country in eight months than George W. Bush did in eight years. Seriously, the man is pathetic. 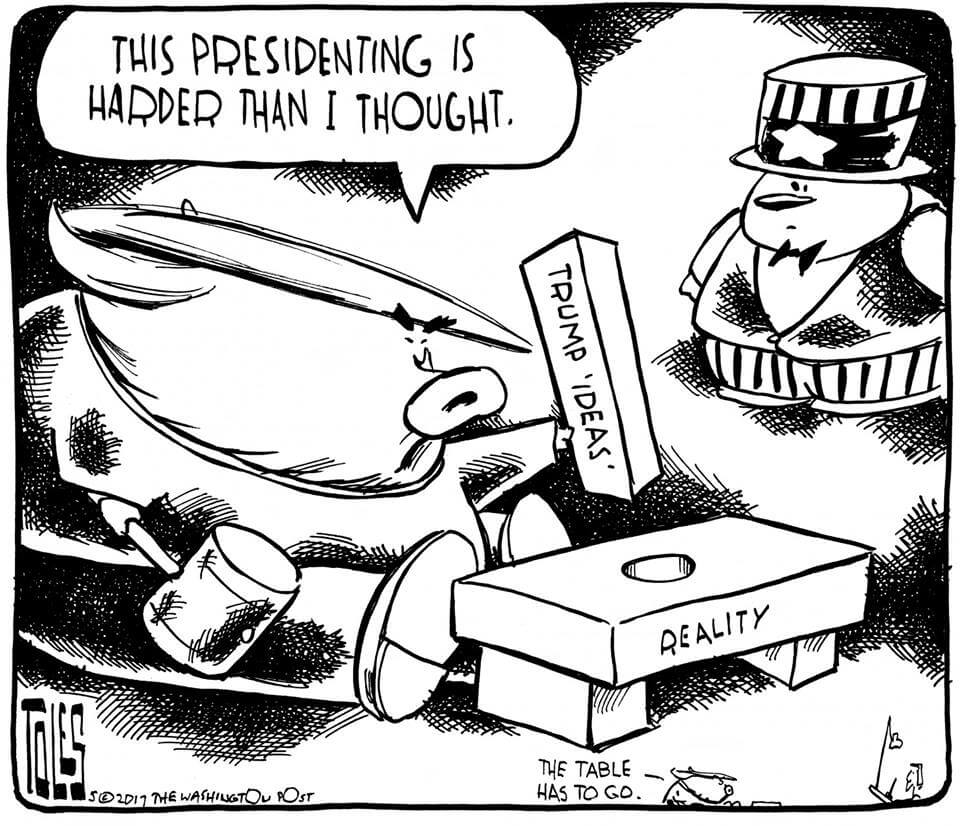 Many will know Ann German for her Impeach Pussy Grabber stickers, her Wanker Justice website, and all the tweets she directs my way. But of course there’s more to her than that. Here she is with a blues performer she sponsored at a festival in her hometown of Libby, Montana.

Hello, tweeps . . . here I am with Brother Yusef here in Libby, Montana for the 2017 Riverfront Blues Festival . . . he was EXCELLENT!!! pic.twitter.com/vk8LQFtxg1

Well? What else would you do with a cat?

HAHHA IT WAS ME pic.twitter.com/QWNS8RWgtV

Even when they’re being bad-ass, they’re cute!

In this section on 20 August, the first tweet was of a dog trying to get through a small gap carrying a long stick. Reader Federico Bär in Argentina sent me this great cartoon in response …

Just playin’ in the bath!

may you be as happy as this dog is pic.twitter.com/TChOiZBhnq

I hope someone can explain this to me …

what is in this dogs food..? pic.twitter.com/F6vq0WCNGL

Just back from great trip to West Papua. Check out the dance moves of this guy (a male Western Parotia)! pic.twitter.com/ElWKwGPNxP

I wonder if this woman began her career playing a tree in the school play?

Some more of the great work by the SWCC Hedgehog Hospital …

Bee was 80g with maggots in her eyes. She got a skin infection and her spines fell out. Very poorly. Now 800g and released to the wild! ???????? pic.twitter.com/LZPl7SPJAO

One of the most beautiful pictures I’ve ever seen …

These starfish feeding under the glow of the Northern Lights pic.twitter.com/mndUMclPT9

Ignoring a problem doesn’t make it go away. We study this problem in other countries too Mr Trump.

Wow! Now that’s a library! (It looks a bit like that one in Dr Who – look out for the shadows!)

A man browsing for books in Cincinnati’s cavernous old main library. The library was demolished in 1955 pic.twitter.com/9wzZioLtg2

This is very moving, especially in the wake of recent events.

Remember when the United States had a president who understood history? pic.twitter.com/XGJJhABy5R

The first three of these are from Ann German – I didn’t need to do much today!

A mug that every FBI agent will soon have on their desk. #FridayFeeling #trumpRussia pic.twitter.com/ybDbyyKPsQ

This is a really long thread of hilarious tweets that start with this one, and it’s worth clicking through to check out the rest:

There are several tweets in this thread too if you click through. There’s no need to though as they’ve been put together to make this hilarious video …

Okay, this is like my favorite thread ever!!, so I wanted to see what it would look like merged with a Ken Burns-ish voice reading. pic.twitter.com/E2frNNahFH

This is what I’ve been saying …

Former Bush official, Bruce Bartlett was taking no prisoners as he dispelled the untruths about Trump’s tax cut plan. pic.twitter.com/4KX3QTyl3e

I will NEVER be silent pic.twitter.com/O62CgOdaWc

This was going to happen sooner or later …

(The first two of these tweets are from Ann German.)

I suspect far too many would believe this!

Science tip:
If you wear your Make America Great Hat you can stare right at the eclipse without wearing those sissy ass glasses.

i will block the sun pic.twitter.com/bvLVZvg1wR

This is from 2015, but it’s fantastic so I’m including it. You have to click through to Twitter to read the list – it’s genius! I promise you will enjoy it. I’ll give a couple of examples of the “terms”. (Via Ann German.)

Capitalism: your mum washes your clothes.
You pay her a dollar.
She complains.
You call the police and claim she’s rioting.

Religion: your mum does the washing. You thank god.

Patriarchy: your mum doesn’t exist. The washing is mysteriously done

Anti feminism: your mum has left you. A year later, You wrote “fucking whore” with the dirty clothes on the floor