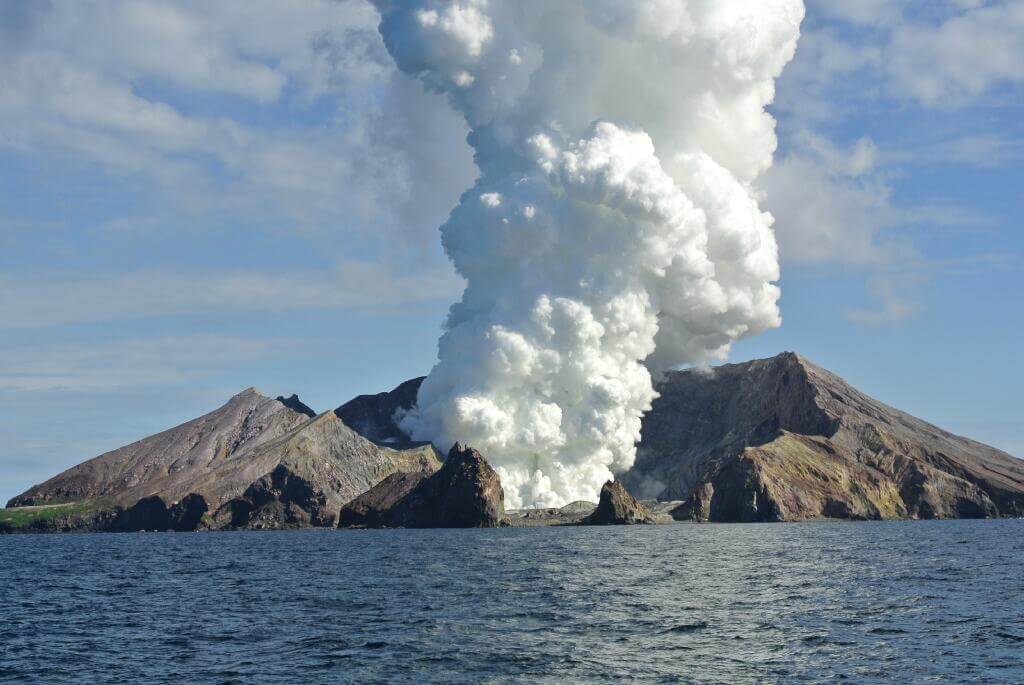 After saying ‘I’m Back‘ a few days ago, there was nothing more on the site to encourage you to believe me. I’ve been writing about the topics that got a mention in that post. But, short of posting boring videos of me tapping away, there’s no way to prove that. Further, it produces no immediately digestible product. So here’s a short post about Whakaari/White Island, and some tweets, to get me off the hook for a little longer.

There’s also a pretty horrific situation in Samoa. There’s been a measles epidemic there for a couple of months and dozens of children have died. Many of you who don’t live in this part of the world may not be aware of that. It’s been exacerbated horrendously by anti-vaxxers, so naturally my blood is boiling. I don’t have time to get to that today, but that’s another topic I want to write about as well. 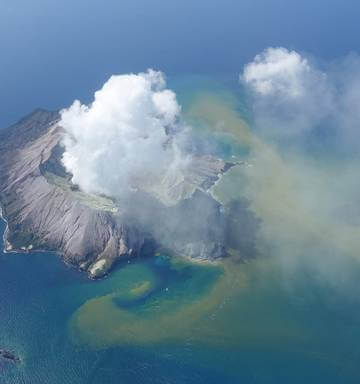 When I discuss the eruption of White Island with friends and family in New Zealand, the thing that shocks and surprises us the most is that there were people on the island at the time of the eruption. White Island is an active volcano. It constantly belches steam, and sometimes other things too. (The pic at the top of the page is from 20 August 2013.)

As kids, school and Christmas holidays at our grandmother’s place meant we would drive along the coastal highway on the mainland from which you can see the island. It’s only 48 km off the coast, so on a clear day there’s a beautiful view of the 321 metre volcano with steam streaming from the cone. That view was a highlight of the trip.

But because White Island is so active, it’s also one of the most studied volcanoes in the world. Tourists have been visiting for decades without incident. It is a shock to all of us that this could happen without the experts knowing an eruption was imminent.

It appears there were no GNS scientists on the island at the time of the eruption as there was no field work planned this week. (GNS are the government science agency, and are responsible, among other things, for monitoring the island.)

This Wired article: ‘Why Volcanologists Didn’t Predict New Zealand’s Deadly Eruption‘, while basically all from various New Zealand sources, does provide a good summary of what we currently know. It reports a GNS scientist’s comments: “We were seeing indicators change a few weeks ago that led us to raise the alert level [from L1 to L2], but those things were not changing in that short time frame right before the eruption.”

The official death toll is now eight; two more died overnight from their burns. One of the men that died, tour guide Hayden Marshall-Inman, was heading back to the island to rescue more people when he lost his life. There are a further eight people missing on the island, and the presumption is they are dead too. Journalists are reporting that people have burns to as much as 97% of their bodies. That alone is horrific to imagine.

There will, of course, be investigations into what went wrong. Basically, it’s too early to get answers. The focus right now is on the victims. Also, because of the danger of another eruption, it’s still too dangerous to go back to the island. Most of the casualties are also too badly injured to question right now.

The victims are mostly in intensive care units, which is why they’ve had to be spread so far and wide across the country, and even to Australia (see below). A country of less than five million just doesn’t have enough Burns Units in one place to treat this many victims. It’s also why arrangements are being made for more Australian victims to be transferred back there for treatment and recovery.

Data on the Victims

A further eight are thought to be on the island, presumed dead.

30 in hospital – 8 in Christchurch, 7 in Middlemore Hospital [Auckland], 6 in Waikato [Hamilton], 4 in Hutt Valley [near Wellington], 2 in Auckland City, 2 in Tauranga Base Hospital and 1 in Wellington.

One injured Australian due to fly from Wellington to an Australian hospital overnight.

More Australian patients expected to be flown to hospitals across Tasman in coming days.

47 people were on or near the island when the volcano erupted – 24 Australians, nine from the US, five Kiwis, four Germans, two Chinese, two from UK and one from Malaysia​.

The risk of a further eruption on White Island stands at 40-60 per cent and police insist it remains too dangerous to collect the eight bodies on the volcano. [I think that’s perfectly fair, and I think it’s unfair of the Herald to use the word “insist” with the implications it carries.]

Deputy Police Commissioner Mike Clement has defended the cautious decision to further delay the retrieval operation – he says officers are determined to return the victims to loved ones but not at the expense of rescuers’ safety.

Clement said police may consider seeking consent from the victims’ next of kin about whether they would be happy for recovery teams to go in to quickly recover the bodies, even if this meant losing evidence required to formally identify each person.

GNS says the threat of another eruption in the next 24 hours is 40-60 per cent.

I will provide more information in future posts, as it becomes available. In the meantime, on to happier topics.

Ann German sent me this a few days ago. It’s a new video from the fabulous Mrs Betty Bowers, America’s Best Christian. Enjoy!

This indeed lays out clearly why there is a case for the impeachment of President Trump.
(h/t Ann German.)

Wow. This is pretty incredible.

In under 5 short minutes, @RepSwalwell lays out the entire & clear case for impeachment in undeniable terms#ImpeachingHearing
pic.twitter.com/eF46Tmwokr

NADLER: "Trump will not be president forever. When his time has passed, when his grip on our politics is gone, when our country returns as surely it will to calmer times and stronger leadership, history will look back on our actions here today. How would you be remembered?" pic.twitter.com/pcCuZH5ASH

You watch the video above, and see how clear the case is, then you see something like this. The Trump Cult believe him, no matter what. They’re what my next Proper Post will be about.

These deluded suckers are willing to go to war in defense of their clown dictator. Hello, cult.pic.twitter.com/fmLh7RITpP

As George Conway shows here, Republican politicians will now tell outright lies if it suits them. And Scalise is far from the only one. A fish rots from the head.

Another outrageous example of what an a$$ho£€ Tucker Carlson is:

Tucker Carlson guest says that @AOC's district is dirty and the reason it's so dirty is bc it's "one of the least American districts in the country … it is occupied by relatively few American citizens" pic.twitter.com/OOn6aiMt7L

When you see something like this, and there are many other examples in relation to Fox News, you can’t help but agree with articles like the one linked to in this tweet.

Garrett Graff: "Fox News is now a threat to national security. The network's furthering of lies from foreign adversaries and flagrant disregard for the truth have gotten downright dangerous."https://t.co/pgyO8GIKQZ

Another example of how sick religion is, especially when it comes to women. It is clear to me that many of the rules stem from a time when men were scared of a woman’s ability to procreate. Thus, they created such rules in order to control women.

Nepal has arrested the brother-in-law of a woman who died after she was banished to a cow shed during her period, the BBC reports.

The 21-year-old woman suffocated from a fire she lit to try to keep warm. This is believed to be the first arrest over the banned Hindu custom pic.twitter.com/Z5dwAlE3Gv

This hits both my anti-religion and hate of anti-vaxxers buttons:

English is the most spoken language in the world. Can you guess what No. 2 is?

This is really cool!

The usual contradictions of fascist rhetoric.
We're superior, but victims
We're in charge , but our opposition is to blame for everything.
We're winning, but be afraid all the time@Kasparov63
Here they are and go again. pic.twitter.com/jSAguVsbTx

I love Kamala Harris. I hope she continues to do well in the Senate, and comes back for another run in 2024.

When you return to the Senate in a bubble gum pink blazer to call for the investigation of misconduct committed by the Attorney General of the United States. ???????? pic.twitter.com/Bf5HrOyQzf

FFS! To Jesse Watters, ONE real life example = "a lot". #Misogyny much?

As a Jew, yesterday’s targeted attack on a Jewish store in Jersey City devastated me but I refuse to be afraid. Instead, I will continue working my ass off with ⁦@MomsDemand⁩ to end gun violence. When hate comes armed, it can be deadly. #DisarmHate https://t.co/XprbxyafyM

I gave most of my cat tweets to Jerry Coyne for tomorrow’s ‘Hili Dialogue’ on Why Evolution is True because he’d run out of tweets from me, but it’s never hard to find more!

“My” cat reaches out like this when he wants me to do certain things, but playing with water is not one of them. (He usually wants me to turn off the light when I’m reading in bed.)