I’m Back (plus Tweets and other Stuff) 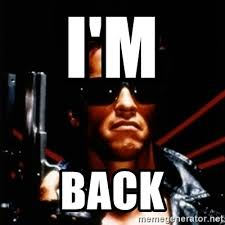 Though obviously not with the presence of The Terminator! There are, of course, a lot of other cool examples of the use of this phrase in popular culture, but Arnie’s my favourite. This post, mostly comprising of tweets, is to ease me gradually into the habit of writing and posting again. It’s been several months, and my first post needs to be one I can start and finish in one day. Having said that, I’ve already had four interruptions – two by the cat.

So, greetings! It’s been a while, but hopefully the hiatus is finally over. I simply haven’t been up to posting. I won’t bore you with the details, but things are back on an even keel now. I’ve currently got three posts in preparation, and I’m hoping at least two of them will make it on to the website. One I’ve made mention of before in the comments: my reasons for opposing the death penalty. The other is about Trump’s cult.

The third, which I’m struggling with but is a really important topic, is the huge number of judges Trump’s appointing. In the US these are lifetime appointments, so the conservative Christians are set to influence culture there for a long time to come, and not just in red states. They’ve already made a lot of “progress” when it comes to controlling women’s decisions in relation to their own bodies, and more are in their pipeline.

In the meantime, here’s a little entertainment.

One of the things that got me going when it came to posting was the latest offering from New Zealand’s Martin Heck. His time lapse films are wonderful, in the true sense of the word. Regular readers will remember I’ve put up several of his short films in the past. (Here’s a post that includes a film of how he makes them.) As always, remember to put the video on full screen to completely appreciate the beauty:

The cartoon below is the likely result if Trump decides to testify at his impeachment hearing.
(Via Ann German.)

Oh yes I am sure he will, riiiight. This would be the MOST coherent he would be. pic.twitter.com/Jc49xOZVAa

Today, Trump let us know he thinks he’s the greatest president ever.

“Not only have the Democrats not advanced key pieces of legislation that would help the economy, but the polls, especially in early states, are showing that voters are tuning out.” @PeteHegseth They don’t want our greatest of all presidents impeached!

I’m sure you’ve all heard about Trump’s rant a couple of days ago. Someone designed a new hat for his followers:

The GOP don’t seem to be able to help themselves. Lying is par for the course these days.

This is obviously a slip of the tongue, and Trump is being widely mocked for it. (I assume he’s actually referring to abortion in the ninth month.) The complete lack of understanding of the medical reasons why ninth-month terminations need to stay legal is one of the more frustrating parts of the anti-choice campaign. They always make it sound like Democratic women and their doctor are frequently deciding to have healthy nine-month foetuses killed. That lie makes me really, really angry.

Statement from The President: "Right now in a number of states the laws allow a baby to be born from his or her mother's womb in the 9th month. It is wrong. It has to change." Watch. pic.twitter.com/v5dx94Httn

7 December 1941. The day the US finally came to the help of its allies. This first draft of the president’s speech is very interesting.
(Via Ann German.)

How many times have I said it now? I love otters!
(Via Ann German.)

I FINALLY GOT MY HARLEQUINS TODAY! A lifer for me!!! Sorry for the camera shake on this clip, it’s a combination of the strong wind on the jetty at Jones Beach and my excitement! pic.twitter.com/sVbmIqlZdK

It’s confusing for a kitteh!

I’ve always wanted to try this. I guess I’m not the only one!