Octopuses are Cool (plus Tweets) 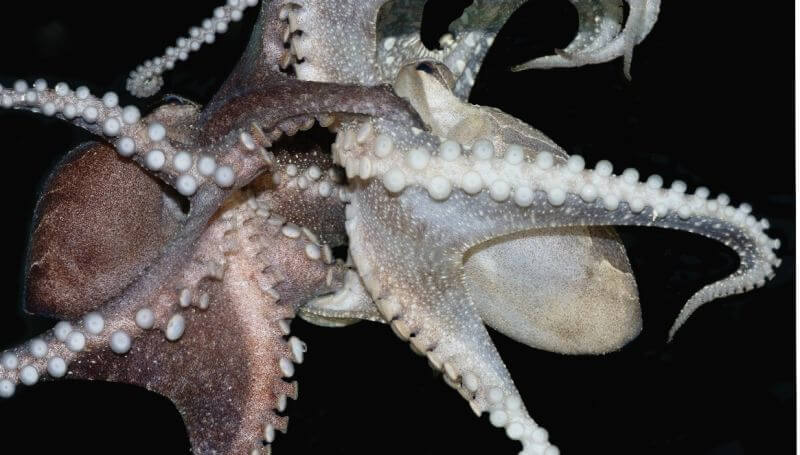 I was trying to think of something to write about for this tweets post from the plethora of topics available. However, I’ve got a cold, and I’m still recovering from a day Christmas shopping in Taupo with my mother, so my brain’s not working.

So in the meantime, I was gathering tweets to add to the post. I found the one in the Marine Tweets section with a cool video of an octopus. As a comment, I wanted to write, “Octopi are cool.” “Octopi” got a red wave line, which actually isn’t uncommon in WordPress even for real words. It happens a fair bit because I write in English and not USian.

That lead me to check my spelling of octopi, and I got this:

The standard English plural of octopus is octopuses. However, the word octopus comes from Greek, and the Greek plural form is octopodes. Modern usage of octopodes is so infrequent that many people mistakenly create the erroneous plural form octopi, formed according to rules for Latin plurals.

You learn something new every day. I was taught by multiple people that the plural of octopus was octopi. I never thought to question it.

There’s another one that I only realized within about the last ten years that I’d been getting wrong. I often said, “I felt nauseous.” What I should have said was, “I felt nauseated.”

There are a couple of others. It’s quite embarrassing when you like to think you have a pretty good command of the English language, and you’ve been screwing it up for years. Probably a whole lot of people had a good laugh behind my back, “She thinks she’s so clever but … .”

Is this stuff important? It depends on the situation, as with most things.

And yes, that pic is two octopuses mating.

The lack of foresight and long-term planning in the GOP tax plan makes me wonder if those designing it have any knowledge of economics whatsoever. As this cartoon says perfectly, it’s all about short-term gain.

That’s a turn-up for the books when it comes to the GOP.
(Via Ann German.)

I think this tweeter has hit the nail on the head! (See the Political Tweets section here.)
(Via Ann German.)

Here’s the REAL reason Trump is amped up about the cover of Time — pic.twitter.com/D7DmUVDpDq

Hasn’t he got a country to run?

The president is spending his morning retweeting these videos from a leader of Britain’s far-right, ultra nationalist Britain First party (who was recently convicted for harassing a Muslim woman on the street) pic.twitter.com/96VmpgEU42

This was the White House response:

Q: “Does the White House have a responsibility to verify information before they retweet it out? Isn’t it fake news not to do that?”
Sarah Sanders: “Look again, the— whether it’s— it’s a real video, the threat is real and that is what the President is talking about.”

Leigh Corfman is a woman who was only fourteen years at the time when when she says Roy Moore sexually abused her. In my opinion, her allegations are credible. Until recently, Moore used surrogates to attack her. Now he has done so himself so Corfman has written an open letter to him.
(Via Ann German.)

Leigh Corfman, in a letter to Roy Moore: “When you personally denounced me last night and called me slanderous names, I decided that I am done being silent. What you did to me when I was 14-years old should be revolting to every person of good morals.” https://t.co/sBZzRUukAk

These are some of the women who have accused Donald Trump of sexual assault.

We’re seeing an incredible cascade of truth telling about predatory men. I can only imagine the frustration felt by the women who have accused Donald Trump of the same kinds of abuses that he is not just avoiding accountability, but actually lashing out self-righteously. pic.twitter.com/Glvdh7Xxub

These tweets deserve a section all of their own!!!

What are those red things on the plate supposed to be? Tomatoes?

Mum’s scary too in this one. I wouldn’t drink juice poured by someone with that look on their face!

I love watching this sort of thing!

Cool machine! Of course, we wouldn’t need them if people just disposed of their rubbish correctly.

This is fantastic. We need these in every port. pic.twitter.com/mgl5rYkAFy

The third donkey thinks it’s so clever because it is!

Batman has found his match!

Superhero protector of Gotham City, who fights against evil and strikes terror into the hearts of criminals everywhere but knows fuck all about bullfighting. pic.twitter.com/iRicL43yXL

Mama croc and her baby.
(Via Ann German.)

Instinct prevents the mother from closing her jaws as she carries her young from the riverside nest, into the water. pic.twitter.com/dBx70BGmv1

I wonder what it looks like to a seal?

“Alan, I dare you to bite that bloke’s head.” pic.twitter.com/NQs8Tw4czj

When an octopus swims through the water, their hearts don’t beat and so they tire quickly. Which is why you’re more likely to see one crawling along the floor like this octopus filmed by AmbassaDiver @Manuel_Bustelo pic.twitter.com/qJamWoB680

What a gorgeous creature!

One of the nicest-looking katydid nymphs (possibly Harroweria sp.) from the Amazon rainforest, with candy cane coloration to bring on the holiday spirit for you! pic.twitter.com/vHJr4mPHf8

Threatened New Zealand dotterel have been found nesting in Kapiti for the first time, with six eggs found at the Waikanae Estuary: https://t.co/j92qWLBGoW pic.twitter.com/gU11LitKPw

‘No food in this tree they said, I’ll show them!’ pic.twitter.com/AJ6UPynCXx

this is the best thing i’ve seen today pic.twitter.com/CHuax6xJay

People think this is funny! I feel sorry for the poor dog. He obviously has something wrong with his eyes, and it’s time his owner stopped throwing stuff at him and got him checked by a vet in case it’s something serious.
(Via Ann German.)

this is the best video i have ever seen ???? pic.twitter.com/fVlzhtSCos

This kitteh found a nice place to nest!

So, Jaguars are the most badass cats on earth pic.twitter.com/Fm5XATqFxo

Cat-eating fish? Catfish? Plot by alien fish overlords to steal all the planet’s cats? You decide.

After millennia of merciless predation by the feline community, this plump poisson exacts delicious and overdue revenge. pic.twitter.com/MAo3XUqX4U

What great looking cats! I bet they have heaps of character.