More on Gun Safety in the USA (plus Tweets) 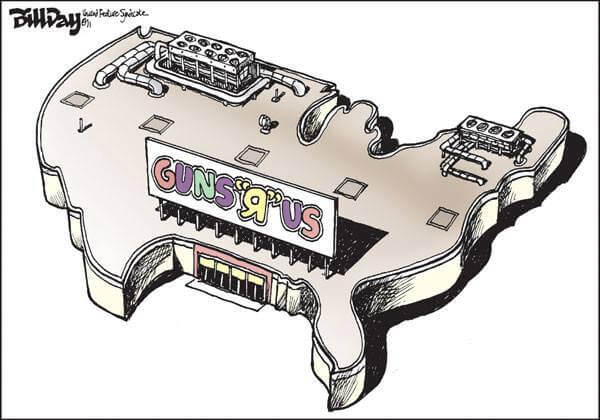 As all presidents do after a major school shooting, President Trump has been saying he will make changes. No one seems to believe him though. As a result of that, you’ll find a tweet in the “Political Tweets” section that shows his approval rating is at a new low.

At the moment, the phrase “Gun Safety in the USA” is a bit of an oxymoron. The more I find out about the subject, the more I can’t believe what I’m learning. Almost every gun death is unnecessary and possible to avoid. Some of the changes would be quite simple, although there are always opponents who are able to come up with a reason not to change anything.

Trump is probably sincere in his desire to make things better, but the cynicism of the public on this issue and his own track record make this unlikely. It doesn’t help that he’s proposing stupid things like arming teachers as a solution.

(The link above goes to my last post, which addresses the issue of guns in schools. In the comments reader Peter linked to a Vox article that includes two excellent videos on the subject, both of which I highly recommend. They are:

‘Proof that Concealed Carry permit holders live in a dream world, Part One‘

‘Jordan Klepper: Good Guy with a Gun: The Daily Show‘

There are some other good links in the comments section too from both Peter and others if you are interested in finding out more on the issue of arming teachers.)

In April 2017, President Trump spoke at the NRA annual convention. He told the ecstatic audience that they had a “… true friend in the White House.” Despite that, he is now supporting some gun control measures against the wishes of the NRA. For example, he’s directing Congress to move on banning bump stocks and suggesting a raise in the legal age to purchase guns to 21. 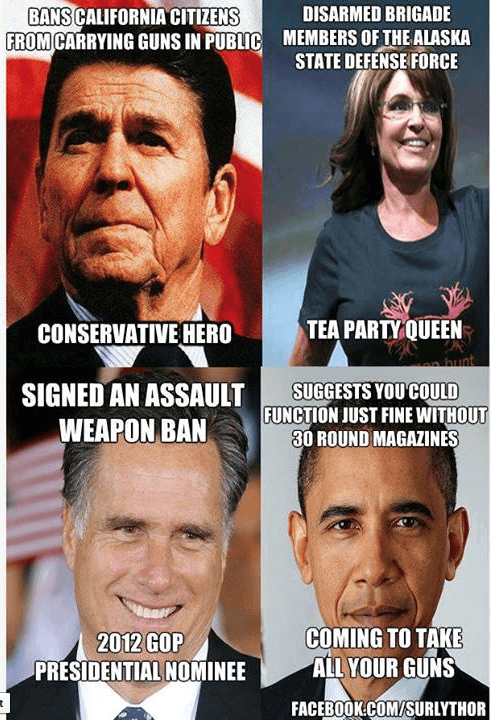 This is a positive move and on the subject of gun control, Trump could be a hero. A Republican president, especially one as popular with the gun lobby as Trump, can do things that a Democrat never could.

If you watch the second of the videos linked to above, you will see that virtually anyone in the country can get a Florida conceal carry permit by post with just one day of firearms training. That then entitles that person to carry a concealed firearm in 31 states. I find this outrageous, but then it was Florida who brought us the case of George Zimmerman 6 years ago yesterday (26 Feb 2012). It seems they learnt nothing from that. We learnt that the Florida legislature is prepared to sacrifice children so they can have fun shooting up the place with an AR15.

According to The Hill, Congress has announced they are “preparing a legislative package aimed at bolstering school safety…”. However, it seems that it includes an increase of guns in schools and the completely stupid idea of arming teachers. (Imagine if that money went into things like books and teacher salaries instead.)

Further, due to the firm opposition of the NRA, Trump looks like he may be preparing to back away from increasing the age to purchase guns. This is what The Hill writes about that:

In comments later on Monday afternoon, White House press secretary Sarah Huckabee Sanders said Trump remained supportive of the “concept” of raising the age limit but would need to see legislation on how it is implemented.

“In concept, the president still supports it, but in terms of legislation, we’d need to see what that looks like before we weigh in further,” she said.

It doesn’t look like the “package” will contain much, if anything, around improving the background check system. Many other measures that would help keep guns out of the hands of bad guys don’t get a mention either.

So basically there has to be enough so that Trump can say he did more than any other president ever without pissing off the NRA.

There are quite a few tweets below, and some are a few days old now I’m sorry. I started this post immediately after the last one, but life intervened.

Who knew? Aussie PM Malcolm Campbell does a great impersonation of Trump!
(Via Ann German.)

I wonder if Australian PM Malcolm Turnbull’s brutal impersonation of Donald Trump came up in their meeting today.https://t.co/chOXs1jAVk

I suspect Trump thought he could raise his popularity over the gun safety issue. But so far there’s no actual progress and no one realistic is expecting any from the moves made so far.
(Via Ann German.)

Just posted: President Trump’s job-approval rating drops to a new low, 38%, in the USA TODAY/Suffolk University Poll, and the intensity of feeling is hardening against him. https://t.co/h38qKTGlRs via @usatoday

This is one of the things about the 2016 US Presidential Election that frustrates me the most. There was an FBI investigation into Hillary Clinton’s handling of emails. It was over by the time of the election and she was not charged.

There were multiple investigations into Donald Trump and his associates, and because they were ongoing they were not discussed. Many charges have now been laid, and there are most likely more to come.

But it’s Hillary who was called “Crooked.” #CrookedTrump!
(Via Ann German.)

For the record, I haven’t lost hope that *someday* we will have the backstory on this influential NYT piece, one week before the election.

We know now that FBI had multiple active investigations of Trump associates at this point. But vastly greater HRC email-“scandal” coverage. pic.twitter.com/P42DSckH0H

BTW, if you look up the #CrookedTrump hashtag, you’ll find really scary things like this:

This is one sick world because of #CrookedTrump Extreme right-wing Oath Keepers are urging members to stand guard at schools. https://t.co/3e6FkF7OFK

Just to separate it from the Mueller Time Tweets section, here’s a link to information all about the Mueller team, and their areas of expertise.
(Via Ann German.)

Instead of focusing on Team????????Taitor, take a minute to learn more about the HEROES on Team????????Mueller in this cool interactive‼#MuellerTime https://t.co/OzOs2fkss0

These are the first four tweets in a thread that makes very interesting reading. Click on the first tweet to go to the thread for more.
(Via Ann German.)

A few things to keep in mind:
1. Paul Manafort was caught offering to give Russian billionaire Oleg Deripaska ‘private briefings’ on the 2016 Trump campaign. Manafort was deeply in debt to Deripaska, a key Putin ally.

2. The only change to the GOP party platform made by the Trump campaign was a reversal on the GOP’s plan to insert language calling for the US to provide lethal defensive weapons to Ukraine.

Paul Manafort was the campaign manager during the RNC, when this all took place.

3. Jeff Sessions admitted, after first denying that he met with Russian Ambassador Sergey Kislyak, that not only did he meet with Kislyak, but he discussed Ukraine with him.

4. What was Trump doing while Paul Manafort was essentially selling off access to the campaign?

He was busy denying that Russia was going to invade Ukraine. After they invaded Ukraine. Oh, and also parroting the Kremlin’s talking points on Crimea.

And this is the last tweet in the thread:

In April, Trump released a proposal to slash foreign aid that would have cut U.S. assistance to Ukraine by 68.8%.https://t.co/GeDb3Swl6C pic.twitter.com/lXT0ZA0yiX

A few of mine again …

How the #GOP sees protecting the lives of gun victims …#NoMore pic.twitter.com/VILS8YvfAk

The next election is coming, and people want action on making the US safer from gun deaths. And seniors from every high school will be eligible to vote in 2018 … pic.twitter.com/H8HfSQsex9

I believe the #1 reason the #NRA is advocating guns in schools is because of the money they and their backers would make from such a policy. pic.twitter.com/zub0f497GE

GOP politicians are patronizing gits when it comes to trying to sympathize with today’s kids. #NeverAgain pic.twitter.com/9LV54lFym2

The world according to the far right …#ParklandStudentsSpeak #NeverAgain pic.twitter.com/H10anRQUeH

Question: How many NRA spokespeople does it take to change a light bulb?

Ann German found a whole thread which compares members of both the Trump administration and some other to characters in the Simpsons. I’ll reproduce a few here, but it you click on the first one, you’ll find a whole lot more in Twitter.

I’ll be damned if Paul Manafort isn’t Principal Skinner from the Simpsons pic.twitter.com/mPa471B7mH

Here are the ones matching members of the Trump Administration.

Ben Carson is Dr. Hibbert from the Simpsons pic.twitter.com/UPBNvi0XrC

Ann also found this excellent one:

And then there’s this (from Ann too):

As I’ve said multiple times, since Donald Trump declared his candidacy for to presidency, Sean Hannity’s show has been an infomercial for Trump.
(Via Ann German.)

A few days ago, New Zealand won its first Winter Olympics medals for 26 years. I can’t let that go without a mention! First Zoi Sadowski-Synott won a bronze in the women’s Big Air. Just an hour later Nico Porteous won a bronze in the men’s Half Pipe. (Beau James-Wells came fourth in the same event.) Both are only sixteen years old!

It was worth waiting 26 years for this moment.

“It was a pretty crazy feeling when I found out…I just wanted to land those two tricks in a row and I did that. I did that second jump better than I’ve ever done it before and was just so stoked’ Zoi Sadowski-Synnott #EarnTheFern #PyeongChang2018 #Snowboard #bigair pic.twitter.com/taKfrukZQv

What it feels like to win an Olympic Winter Games medal ????????
Congratulations Nico Porteous????#EarnTheFern????#Earned???????? pic.twitter.com/TcMvaDBzuA

#BRONZEMEDAL
And another one! Nico Porteous wins bronze in the men’s halfpipe!

Aged 16 and born on November 23rd 2001 Nico is our youngest ever Olympic medal winner in either Summer or Winter Olympic Games.

Fire & Flames (sc2): Liquid Oxygen #Saturday_Night_Science #Science
(NO. . . not the muffin!)
DO NOT try this at home.
–https://t.co/JkehFZBRaL

You never know what you’ll see on the London Underground!
(Via Ann German.)

#FridayFeeling on the #London Underground – too brilliant! 🙂 pic.twitter.com/HTDipkyS10 #travel #photography

Something to soothe the senses …

Dippy the Diplodocus goes to Dorchester in Dorset!

I’m glad we don’t have snakes in New Zealand. I like looking at them, and many are beautiful, but it’s great living in a country with virtually no dangerous fauna.
(Via Ann German.)

It’s raining snakes…hallelujah? Like many snakes in the Chrysopelea genus, the Sri Lankan flying snake can glide through the air by propelling itself from tree branches and flattening its body by splaying its ribs, creating a shape similar to a frisbee. pic.twitter.com/yIZetp1HqV

This otter seems to be enjoying the hairdryer!
(Via Ann German.)

Otter doing his hair to go out on a Friday night! #FridayFeeling pic.twitter.com/PfnBHqmNOv

this just made my day pic.twitter.com/0bHB0v1ogD

This little dog’s wheelchair didn’t work in the snow — so she learned to ski! (via @caters_news) pic.twitter.com/wFcKLeLQJ8

I’d never heard of a jaguarundis until Ann German sent me this tweet:

Their slender, markless bodies and small, rounded ears give jaguarundis an almost weasel-like appearance, but when seen in action they are unquestionably feline. pic.twitter.com/t3dvhRGjLB

The merciless executioner’s razor-sharp weapon rises aloft, poised to strike down an innocent plastic sack of breath in its prime. pic.twitter.com/PRYINS1MpS

Gorgeous creature, and an important message.
(Via Ann German.)

Took me 20 years to get my first pic of a snow leopard. And I found it on a mountain of trash. Be it oceans or mountains – our trash is choking even the most remote wildernesses. Think before you use plastic next @snow leopards @ncfindia @Snow Leopard Net @WWF INDIA pic.twitter.com/e1N2L01gq3