A few weeks ago I wrote a post about Trump’s nomination of Betsy DeVos for Education Secretary. I concluded K-12 education in the United States was going to get worse.

DeVos’s confirmation hearing occurred this week, and I’m now even more concerned about the situation in that country than before.

Full questioning of DeVos was prevented by the Republican committee chairman, Lamar Alexander. As the Washington Post points out, he set rules protecting DeVos from full scrutiny. For example, members had just one round of questions instead of the usual two. In addition, they only had five minutes to ask their questions; usually they have ten.

Still, the hearing lasted about 3½ hours, which is long for an education secretary. However, Democrats felt it wasn’t long enough because of DeVos’s lack of experience in the sector. Further, she has not yet completed the Office of Government Ethics (OGE) process so things like potential conflicts of interest were not able to be fully vetted. (DeVos has invested in charter schools in the past.) She has also refused to provide her tax returns, though this is something she is not legally required to do.

However, some of the Democrats most skillful questioners were on the job and they exposed DeVos as being unqualified for the role of Secretary for Education.

Kaine recalled a quote from DeVos on education where she said, “government really sucks,” and called public schools a “dead end.” He went on to confirm she had no personal experience that enabled her to make those statements with authority.

He repeated the following quote from DeVos’s husband, made when the couple were speaking together:

The Church has been displaced by the public school as the centre for activity, the centre of what goes on in a community.

He then got her on the record confirming she does not see the Church and education as competitive. When she did that I felt she was lying, or at least wanted to add a caveat to her answer. Her future actions will show whether she was being honest, or I am accurate in my assessment. One of the concerns about someone like DeVos as education secretary is her extreme religiosity. There is a lot of concern she will be unable to prevent herself favouring conservative (especially Protestant) Christianity.

In a tough exchange DeVos said she does not think charter or private schools should have to meet the same accountability standards as public schools. This is extremely concerning.

She also said it’s up to states to decide whether all K-12 schools that receive government funding should have to meet the Individuals With Disabilities in Education Act. The law is a federal one, and therefore it is clearly not “up to the states.” In addition, it’s a human rights issue, which is not something any government official should be ignoring.

Kaine was clear that the country needs an education secretary that will champion the public school system and support children, parents, and teachers. He shows that the history and personal philosophy of DeVos mean she is not suited to the job.

The focus of Sanders was free tuition in public colleges and universities. He wanted to know if she was willing to work with those championing this cause. It was clear that this is not a policy DeVos considers valid.

Sanders also suggested that the only reason DeVos was considered for this role was the amount she and her family had donated to the GOP over the years. He gave an estimate of US$200 million, to which DeVos replied, “That’s possible.”

The Washington Post considers she “was unpersuasive when she insisted that Trump might have chosen her for this post even if she was not a mega-donor to GOP causes.”

Elizabeth Warren focused mostly on whether DeVos had the ability or experience to manage the financial side of her job. Like the other Democratic committee members, she exposed that DeVos was under-prepared for the role.

DeVos’s response is important because Trump has vowed to ban gun-free zones in schools and she makes it clear she supports the president-elect.

However, DeVos’s response here is simply embarrassing, and once again exposes her unpreparedness for the role. Grizzlies? For goodness sake.

And it’s lovely that her heart bleeds. But frankly, I’m sick of gun rights advocates who seem to see school shootings as a consequence they can live with.

There have been several tweets based on the grizzly theme as a result of this part of the confirmation hearing. Most also accentuate the apparent incompetence of DeVos.

A couple of examples:

Still it means we get cool bear pics:

The Next Four Years in US Education

I don’t think most USians realize just how much their country’s education standards have fallen in recent years, especially in comparison with other countries. Making any country great is a long-term process which has many parts to it. A key component though is always education.

Their slavish dedication to free-market principles means Republicans think increasing choice is the answer to improving everything. Sometimes though too much choice, especially when profit is one of the motives, weakens things before they improve. Scarce resources are spread too thin and there’s no solid base.

A good education system may eventually rise from letting the market sort it out. However, it will take many years and in the meantime, there are millions of kids who haven’t been properly educated. Those kids are a drag on society for the rest of their lives.

Children’s education is too important to leave to market forces. There is quality research and experience available from throughout the world which shows what works and what doesn’t. The US is in a position to implement those changes for the good of both children and their country.

Betsy DeVos will be confirmed. There are not enough votes to stop her. I believe she is incapable of doing what is best for the children of her country when it comes to education. 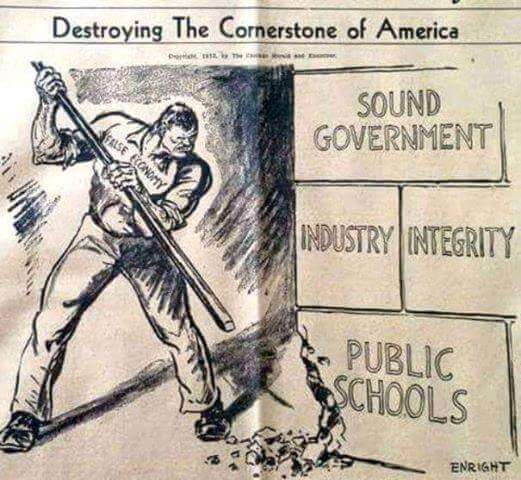 If you enjoyed this post, please consider donating a dollar or two to help keep the site going. Thank you.