Just when you thought the most ridiculous thing you’d read this year so far was my post about Saudi cleric Ali Al-Maliki confidently asserting that the West tampers with burgers so more female babies will be born there, I can go one better.

Saudi cleric Sheikh Ateeq Al-Ateeq said in his fatwa show on the Saudi Ahwaz TV channel that when people post pictures of themselves and their children on social media platforms, they risk becoming afflicted with diseases, including cancer. Sheikh Al-Ateeq warned that people might print these pictures and apply sorcery to them, causing those photographed to fall ill. The show aired on February 3, 2016.

Here’s the clip, as edited and translated by MEMRI:

https://youtu.be/zCZfpI9oHJE
It’s nothing short of bizarre to hear an educated person confidently asserting:

By Allah, I have encountered cases of cancer caused directly by pictures posted on social media accounts. By Allah, I saw this with my own eyes. Children got cancer because of pictures circulated [on-line]. …

A picture might transmit sorcery. The proof is that if I took your picture, and applied sorcery to it, you will be afflicted accordingly. So why do we find it difficult to believe that a sorcerer might take your picture from a social media account, print it, and cast sorcery upon it?

From his words, it seems clear that Sheikh Ateeq Al-Ateeq not only believes in witchcraft, but in his own ability to carry it out.

It’s not clear from the clip whether the Sheikh issued a fatwa against posting pictures on social media, or whether he was just warning his viewers. Even if he had, fatwas are not compulsory in Islam, though there is strong social pressure to comply with them to prove you’re a good Muslim. 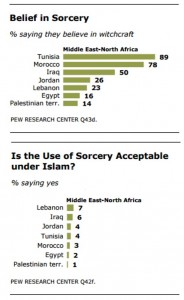 In their comprehensive 2014 survey ‘The World’s Muslims: Unity and Diversity‘, the Pew Research Center examined the extent of belief in the supernatural amongst today’s Muslims.

Both the Quran and hadith make reference to witchcraft and the evil eye as well as to supernatural beings known in Arabic as jinn (the origin of the English word genie).

Saudi Arabia was not surveyed, so how much the results apply to the people in that country is an unknown, but we can at least get an indication via the results of people in the same region. The graph on the right shows the level of belief in sorcery among other Muslims in the Middle East/North Africa region. The government of Saudi Arabia is more religious and conservative than any of the countries Pew was able to survey, though that doesn’t necessarily mean of course that the people are.

As far as other supernatural beliefs are concerned, these were overall, though not it every case, more widely subscribed to in the Middle East and North Africa than any other region, The survey showed that 96% of Muslims in the region believe in angels, 93% believe in predestination, 97% believe in the afterlife, and 51% believe the return of the Mahdi is imminent. (This is the Muslim equivalent of the Christian belief that we’re in the End of Days.) Belief in hell ranged between 85% and 99% over the seven countries in the region surveyed.

Here is what Pew found when they surveyed belief in Jinn, the Evil Eye, use of religious healers, whether talismans could protect you from evil, and whether or not a person (believed they) had witnessed an exorcism: 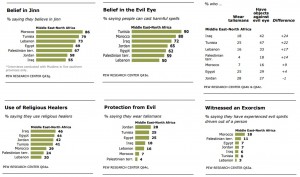 Belief in the “Evil Eye” is similar to belief in sorcery, and it appears a significant percentage of Muslims in the Middle East and North Africa have objects that they believe protect them against it.

So next time you’re tempted to put a picture of yourself on social media, just remember how you’re exposing yourself to evil via sorcery!