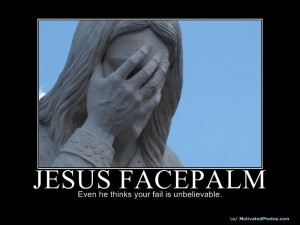 This should be this week’s Auē Tēnei Wiki, because it really does deserve a big face palm, but the title is long enough already.

From MEMRI (Middle East Media Research Institute) we have another example of the kind of delusion often spread about the West in the Middle East.

Imam Ali Al-Malki seems to sincerely believe what he says in this video, first broadcast on Saudi channel Dana TV on 13 January 2013. He tells viewers that a “substance” is added to all food imported from the West to kill the male genes in both men and women so that more female children will be born. This, he says, is depriving them of future leaders.

From MEMRI, the transcript of the clip:

Unfortunately we have problems in this country and we call upon Allah and the Saudi political leaders to protect us and to protect our children. Our Milk has been tampered with. Our Juice has been tampered with. Everything imported into this country has been tampered with… Even the hamburgers. By Allah, when I was in China, I got a study in English, translated into Arabic. It said that the hamburgers sent to McDonald’s, to Harvey’s, and so on, contain a substance… Look at the level of scheming by the West. By Allah, I read this, and I am willing to attest this on the day I face God. They put into the meat that comes from abroad, a substance that kills the male genes both in men and in women. They kill the male genes in the man or his wife, so that there will be more women than men. They know that men are tantamount to future power, army, and hope among all the leaders in the world. Imagine how they came up with the idea of putting that substance in the meat. Unfortunately we take all our dates from Al-Kharj and the north, and all of our grain, corn, and milk, and export them to America, whereas they export whiskey to us. By the way some of that whiskey is not even fresh. It’s defective. I’m a member (of the staff) at the narcotics hospital so I know. They send us defective alcohol, I’m sad to say.

If the West was indeed putting something into the food to cause more females than males to be born than males, Allah must be interfering to make it ineffective. On this map of male vs female populations from Wikipedia, Saudi Arabia is doing pretty well:

The average population sex ratio in the world (NOT the birth rate) according to this graph is 1.01 males for every 1.0 females, though Wikipedia does note that the data are out of date. On this graph, the redder the country, the greater the number of females and the darker the blue, the more males. (Grey is no data.) In case you don’t know, that big dark blue country in the middle of the map in Saudi Arabia.

I also have to take issue with al-Malki’s statement:

They know that men are tantamount to future power, army, and hope among all the leaders in the world.

Wikipedia estimates the total number of active troops in the Saudi Arabian armed forces at 175,000 plus 64,000 in reserve out of a population of 28.83 million. In comparison, Russia, the reddest big country on the map has a population of 143.5 million and estimated active troops of 771,000 with another 2,000,000 in reserve. (All figures 2013.) Per capita, the size of Saudi active armed forces is slightly larger if I got the maths right, but if you include reservists, they pale in comparison to Russia. It seems having more women than men in your population doesn’t affect the size of your armed forced.

However, I’m not sure eliminating armies, unless they’re used only for humanitarian and civil defence missions, is such a bad idea.

As for less men meaning less hope in the world? Well that’s just stupid. What hope has to do with gender I personally fail to see. Perhaps he means only male leaders can generate hope? That’s stupid too. There are differences between men and women and in general they bring different qualities to leadership roles. However, both are equally valuable. Saudi Arabia, by keeping almost half of its population suppressed and not allowing them to live independent lives and reach their full potential is actively damaging their country.

According to a 2015 report by Georgetown University, women in Saudi Arabia make up 49.6% of university graduates, but only 16% of the workforce. It notes:

The country’s guardianship system prevents women from doing many everyday tasks without the permission or accompaniment of a male guardian, and women are not allowed to occupy the same spaces as men who are not relatives.

If you’re not fully utilizing half the talent in the country, you’re not going to get too close to the top.

In 2012 Booz and Company (part of PriceCoopersWaterhouse) did the inaugural Third Billion Index of how much a country’s GDP would increase by 2020 if women’s employment rates matched those of men. These are some selected results, as published in The Economist: 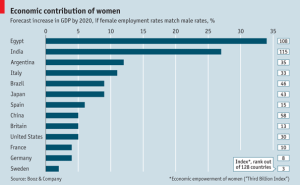 They also ranked each country on the steps they take to empower women to enter the workforce. Countries were ranked in the categories: Preparation, Access to Work policy, Entrepreneurial Support, Advancement, Inclusion, and Pay. On that index Saudi Arabia comes in at 123rd out of 128 countries with a score of 34.2 out of 100.

Here are the top thirty countries. (New Zealand came 1st in “Preparation”, which refers to education and training.) 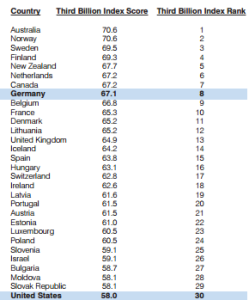 As can be seen the Saudi Arabia result of 34.2 is less than half that of the top ranked countries. Their appalling treatment of women is a blight on their nation.

As I sit here writing this blog on a topic of my choice, wearing shorts and a sleeveless t-shirt, living alone, making my own decision without reference to anyone else (unless I want to), having control of my income, vote, drive, going wherever I want whenever I want (well, I could if I had the money), and being able to openly express my opinions I recognize how lucky I am to live in New Zealand.

In Saudi Arabia I’d be dressed in a bag, have no choice but to live under the control of a male relative, be unable to leave the house without his permission and in the company of a male relative, not allowed to drive, have just voted for the first time in my life (if I’d been allowed to leave the house), and that’s if I was lucky. More likely, I’d be in prison and perhaps under sentence of death, because that’s what happens to atheists in Saudi Arabia, especially if they write blogs.

Reporters Without Borders ranks New Zealand 6th out of 180 countries for press freedom.

Reporters Without Borders ranks Saudi Arabia 164th out of 180 countries for press freedom.