Personal Note: Sorry I’ve been gone so long. I had personal issues, then when I was back to normal my laptop and PC both refused to cooperate. I’ve got the laptop back now, so onward and (hopefully) upward!

One of the features of the atheist community that draws most criticism is that it’s largely made up of white males. The Pew Research Center put out these statistics about US atheists on 1 June 2016:

Because of all that, especially the fact that women are much more likely to be religious, there’s an assumption that men are more liberal than women. The obvious personal distaste of so many women for President Trump has lead to the further assumption that women are only now turning against the Republican party.

Neither of these assumptions are actually accurate. Women turned away from the Republican party in the late 1970s and early 80s when the moral majority of President Reagan became a thing. The gender gap between men’s and women’s votes has been fairly consistent ever since.

Women, in general, do not like conservative policies. In particular, we don’t like the tendency or conservative politicians to tell us what we can and can’t do, especially with our bodies. We’re sick of men thinking they have the right to rule our lives. 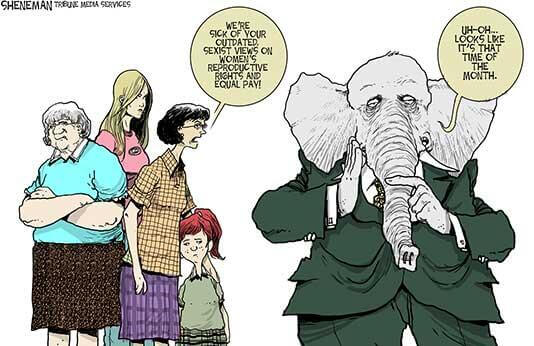 There has been a significant gender gap in voting preference in the US since the time of Ronald Reagan. Even though both men and women gave him their vote in larger numbers than his Democratic opponent, his appeal was much greater to men than women.

Whatever the issue, women are more liberal than men, or at least oppose legislating in a way that discriminates against women. 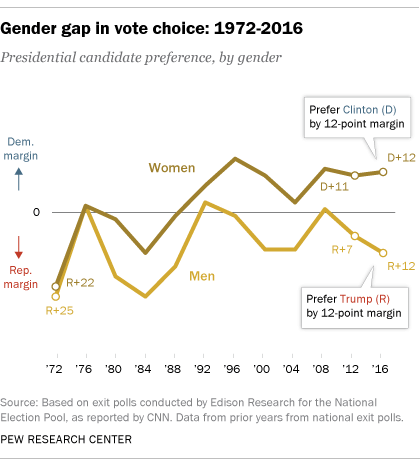 Fifty years on from the Loving vs Virginia decision, opposition to inter-racial marriage in the US in now very low. Still, almost twice as many men as women oppose it. The attitude of women to miscegenation is more liberal than that of men.

In another survey by the Pew Research Center (Where the Public Stands on Religious Liberty vs. Nondiscrimination) from August/September 2016, abortion as a moral issue looked at. In that survey, where only attitudes rather than the law were looked at, men and women were shown to have very similar attitudes:

However, when it comes to the law it’s another matter. The main Supreme Court decision that allows women to obtain an abortion in the US is Roe vs. Wade. The data below shows that despite the fact that their attitudes are similar, women are less likely to want that law overturned. Women are less likely to want to force their opinion on others via the law than men. Again, they have the more liberal attitude. 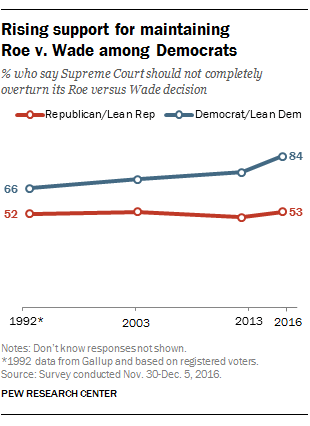 (Clink graph to go to source.)

Women are more likely to be pro-choice, whether or not we personally approve of abortion.

Despite what the men who make up the majority of Republican representation in US government think, most USians, including most Republicans, support the retention of Roe vs. Wade.

Overall, 69% of USians do not want the Supreme Court to overturn the decision that legalizes abortion in their country. Even amongst Republicans, a clear majority (53%) want to keep the law. The figure is overwhelming amongst Democrats – 84%.

The conservative wing of the Republican party are salivating at the prospect of overturning Roe vs. Wade with the appointment of the ultra-conservative Neil Gorsuch to the Supreme Court. If this occurs, it would be against the wishes of seven in ten of the population.

Abortion is another area where women’s opinion is generally more liberal than than of men. While 69% of men want to retain Roe vs. Wade, the figure is 72% for women.

The only demographic which has a majority that wishes to overturn Roe v. Wade is conservative Republicans (57%). Literally, a dying breed.

The GOP War on Women 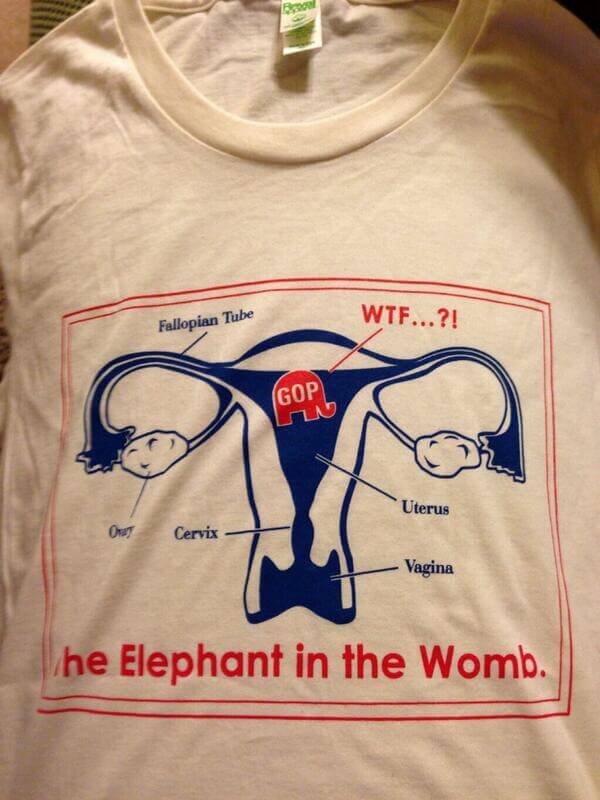 There have always been men in politics on both sides of the aisle who, as individuals, treat women badly. For every Todd Akin there is an Anthony Weiner. The behaviour of such individuals is not the issue in the decision on whether there is a War on Women. The issue is the policy positions of the two parties, and there is only one that makes rules that single out women. The conclusion of a post I wrote just before the 2014 election, ‘Is the GOP’s War on Women Real?‘ was that yes, the war exists.

An example of this is the parties different approaches to the issue of abortion. The Democratic Party supports a woman’s right to choose. That doesn’t mean candidates have to be pro-abortion. Democratic vice-president Joe Biden (2008-2016) was openly against abortion. His position was largely informed by his Roman Catholic religious beliefs. However, he recognized that others did not necessarily share his beliefs and he didn’t have the right to force his beliefs onto others.

Many will remember Trump trying to ingratiate himself with Republicans by saying that a women who has an abortion should face punishment. He later withdrew the comment upon realizing that, once again, he’d got it wrong. However, US states in which Republicans control the legislature have been going out of their way to make it as difficult as possible for women to exercise their constitutional right. Several of these attempts have been struck down by the Supreme Court, even with a conservative majority.

The Republican Party platform on the other hand opposes abortion in all circumstances. Yes, ALL. Instead they want an amendment to the US constitution that recognizes the personhood of a foetus.

Their policies in relation to teen pregnancy and the incidence of STDs in the demographic is absolutely ridiculous stance:

They really seem to believe that this will reduce teen pregnancy and the incidence of STDs, which flies in the face of all evidence.

Some Republican candidates will support abortion in the case of rape, incest, and the life of the mother, but in no other cases. How generous of them. (Yes, that’s sarcasm.)

In general, homosexuality is becoming more accepted in US society. Even the Jehovah’s Witness are up from 12% in 2007 to 16% in 2014! (Yes, more sarcasm.) Of course, most demographics do a lot better than 16%. Christians is general went from a majority in opposition (44%) to majority support in that same time (54%) according to the Pew Research Center.

Pew Research states in their report on their 2013 report ‘The Global Divide on Homosexuality’ that more women than men in the US are accepting of homosexuality. They do not state what the gender gap is except that it is less than 10%. Overall in the US, 33% of people say that society should not accept homosexuality and 60% say they should. This is lower than the acceptance rate in most Western European countries plus Canada (80%) and Australia (79%). Even the pope’s home country of Argentina does significantly better than the US at 74%.

New Zealand was not part of the survey, but Wikipedia has this to say about LGBT in New Zealand:

New Zealand society is generally fairly relaxed in acceptance of gays and lesbians. The gay-friendly environment is epitomised by the fact that there are several Members of Parliament who belong to the LGBT community, gay rights are protected by the New Zealand Human Rights Act, and same-sex couples are able to marry as of 2013.

Women are also more likely to be accepting of same-sex marriage than men. Women got to the point where a majority were in support of marriage equality in 2011. It took men until 2015 to reach that point. However, the good news is that both men (52%) and women (58%) now (2016) give majority support to marriage equality in the US.

This is another area where women are more liberal than men in their views, and significantly so. According to the Pew Research Center, 55% of women think that “Transgender people should be allowed to use the public restrooms of gender with which they currently identify”. Only 45% of men feel this way.

Considering that those insist that they are trying to protect women and children with their ignorant attitudes on this subject, I find the statistics ironic. 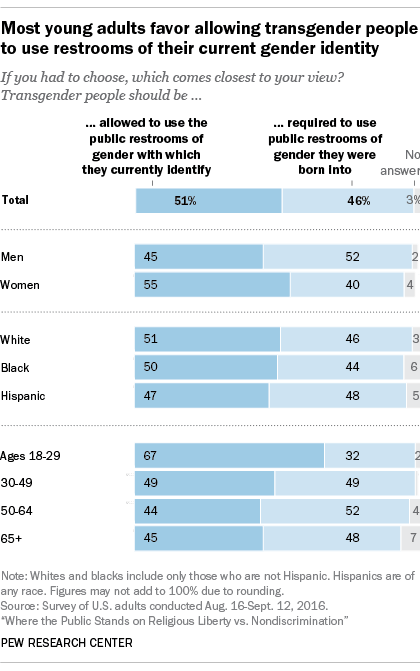 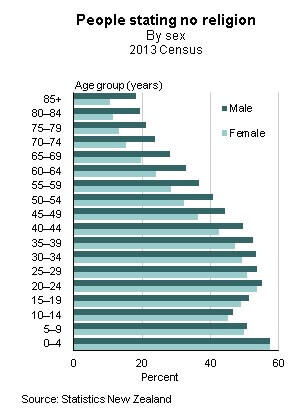 I don’t know why more men than women are atheists. Women actually fit the profile better than men – we’re more liberal and these days we’re usually more educated too.

In New Zealand, more than 1.4 women have a university degree for every man that has one. That’s the highest difference between men’s and women’s education level in the Western world but still more men than women identify as having no religion here.

Overall in New Zealand in the 2013 census:

41.9% identified as having no religion

39.2% of women identified as having no religion

44.8% of men identified as having no religion

There are still, of course, significantly more women atheists in New Zealand (proportionately).

Why Less Women are Atheists: My Theories

My own theory is that it’s partly historical and partly down to the difference between men and women.

Women traditionally worked only in the home, especially after marriage. Therefore their social life outside home was Church. That’s where they got to meet other adults and where secondary interactions such as charity work came from. Their lives are more likely to intersect with the Church.

Men have always usually had a life outside the home. They were not as reliant on the Church as women.

Especially once they have children, which most women do, women simply do not have time to think about whether or not they believe in a higher power. Even now, most women do more when it comes to looking after the home and children even when both parents work full time. Like most others they are taught that as children, and just accept it without examining it.

Thirdly, although women are often better educated these days, there are still less women than men going into careers relying on education in science, technology, engineering, and mathematics (STEM). People educated in those subjects are more likely to be atheists than lawyers, for example, which is a career path that is becoming dominated by women.

On the whole though, I’m at a bit of a loss to explain it.

Maybe it’s just because despite the huge improvements in the last century, and especially the last forty years, women aren’t yet equal. There are plenty of wonderful men out there who treat women as equals. But for every Barack Obama, there’s a Donald Trump.