Anti-Semitism in the US (plus Tweets) 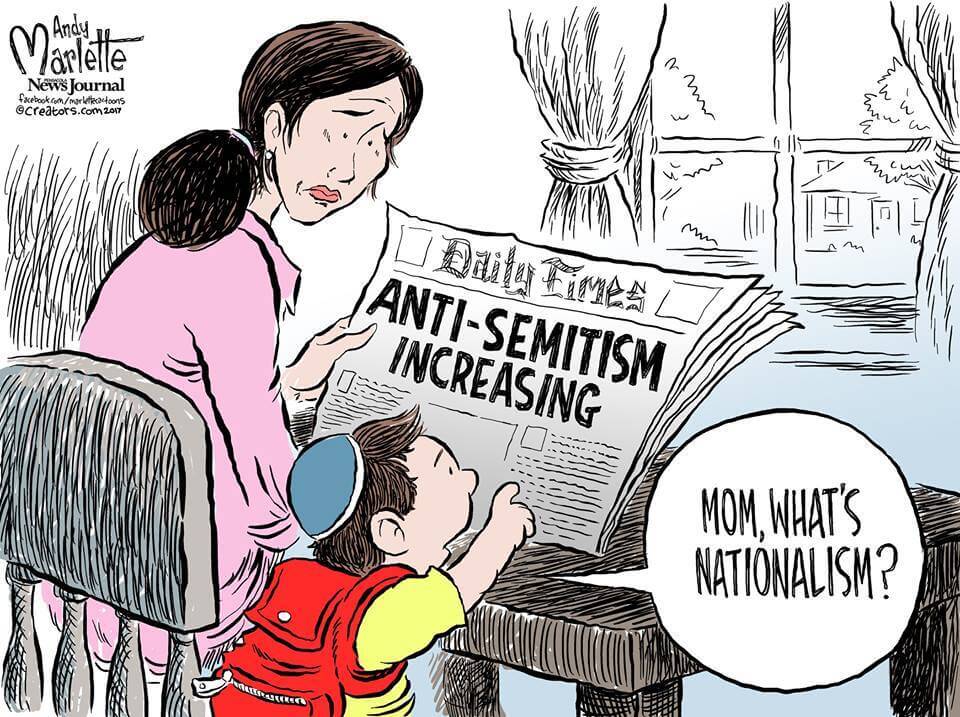 Most days I see examples of the fact of the high level racism in the US*. In particular, there is plenty of exposure of the racism against African-, Hispanic-, Latino-, and Native-Americans on my TV screen. When it comes to the sites I look at on the internet, the focus seems to me more about whether Muslims are getting a fair deal unless there’s a particular story that the media is focusing on that relates to race. The tweets I see are a pretty mixed bag when it comes to different forms of prejudice.

However, statistically, the group in the US that suffers the greatest prejudice is Jews or those with Jewish ancestry. (In some studies it’s atheists, but they don’t suffer violence as much as Jews.) That was brought sharply into focus by the horrific attack on the Tree of Life Synagogue in Pittsburgh a couple of days ago.

Eleven people were murdered by gunman Robert Bowers, and six more injured (including four police officers). In addition to those crimes, the 46-year-old was charged with hate crimes. The hate crimes charge is because Bowers’ is clearly rabidly anti-Semitic. His social media was apparently (I cannot check because it’s now been taken down) full of virulent anti-Semitic messages.

CNN writes that Bowers was of the belief that Jews were funding the caravan of asylum seekers currently making its way towards the US from Central America. However, it’s my understanding that the belief of Bowers and his fellow extreme right-wing ignoramuses is more specific than that. They believe one specific Jew is the culprit in that case: they think businessman George Soros is funding the caravan. They have adopted the carton below as theirs. 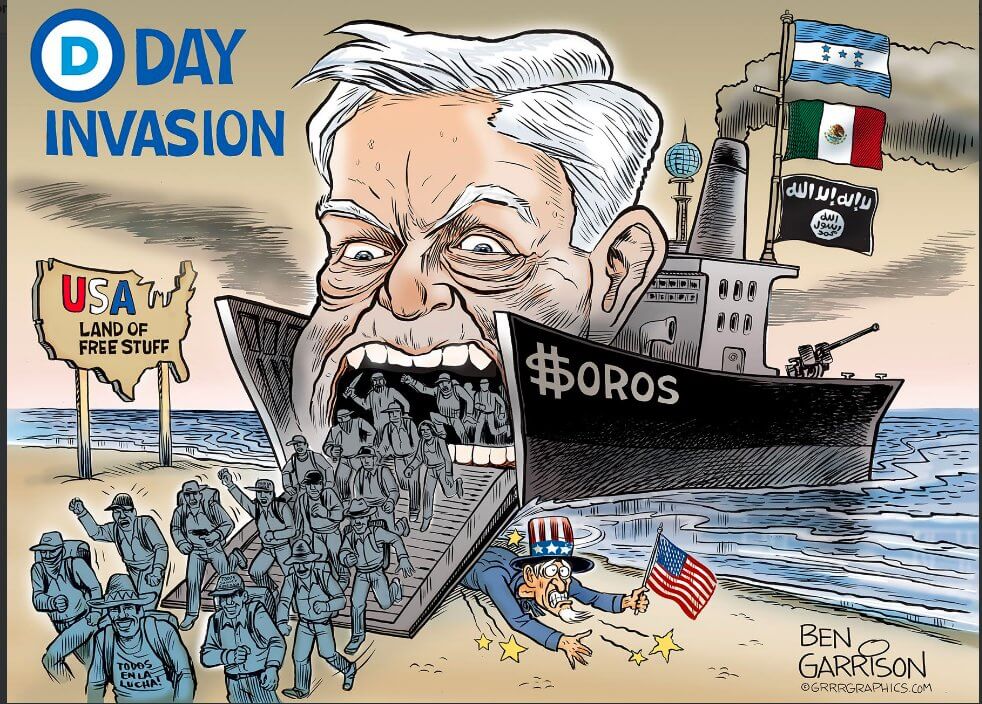 Cartoonist Ben Garrison is known for his anti-Semitic cartoons and is a self-described admirer of Trump. This is not Garrison’s first anti-Soros cartoon and it’s not the first time the far-right have adopted one of his cartoons. (Bowers himself is NOT a Trump supporter because he thinks Trump isn’t tough enough on Jews.) However, the extreme right are not the only ones using this cartoon. The National Republican Congressional Committee are also using it, and far more widely, influencing far more people. They actually name Soros in anti-Democratic ads they are currently running, appealing to the worst instincts of their supporters.

All aspects of right-wing politics have it in for Soros. You don’t have to go to the extremists to find people making up conspiracy theories about him. The reality is he donates a lot of money to the Democratic party. The rest of hogwash. Just a few hours ago, we got this on the network from which most Republicans get their news:

Straight out of the Protocols of the Elders of Zion. Just moments ago, Lou Dobbs guest Chris Farrell (head of Judicial Watch) says Caravan is being funded/directed by the “Soros-occupied State Department”. pic.twitter.com/QBSong7uk1

2/ For those who don’t know this world, “ZOG” is a staple of white supremacist/neo-Nazi websites/literature etc. Stands for “Zionist occupied government”, i.e., US govt being controlled by Jews. This guy knows exactly what lever he’s pulling when he uses this phrase.

3/ Chris Farrell, the guy in the interview is “Director of Investigations” at @JudicialWatch

4/ Final point. Shooter was clearly a virulent anti-semite of long standing. But what appears to have triggered his rampage is exactly THIS conspiracy theory, that Soros and Jews are funding/directing the caravan. This is little the guy’s beef. Pushed on FoxBiz not 12 hrs later.

Here’s another of Garrison’s cartoons, representing the “ZOG”, as he sees it: 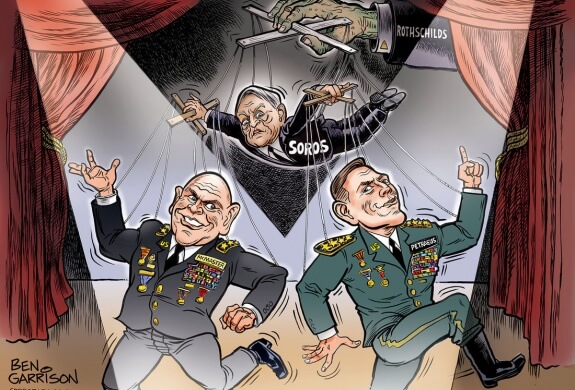 Note: Protocols of the Elders of Zion

The Protocols of the Elders of Zion was debunked almost a century ago. (Check out this post for more info about it.) It’s still fodder amongst conservative Islamist groups such as terrorists like Hamas. To see it come up as if it’s a real thing in US politics without any push back is quite frightening. But then Lou Dobbs is one of those who thought the Florida bomber was a left-wing person trying to make the right look bad.

Last week there was publicity about racist ads being run in Florida against the Democratic candidate. These were not put out by the Republican party, but I could find no evidence of the Republican candidate condemning them. Now, this one is running, and is still running following the attempted bombings and the Pittsburgh murders. Unlike the Florida one, it is from the GOP itself. It frankly horrifies me. Remember too that Soros was the first of those targeted by Florida bomber Cesar Sayoc last week.

The Democratic party in the US are good at calling for a more inclusive society. They appear to largely live up to that in the way they operate too. However, they’re not that good at being specific at calling people out. On the one hand, they want to appeal to all those who are marginalized in society. On the other, they don’t want to lose the votes of the white working class who feel like they are getting a hard time too. Personally, I think it’s possible to do both. The problem in my opinion is that the Democrats are focusing too much on the feel-good factor and not enough on specific policy items. They can’t win an election by being anti-Trump – they have to be for something as well.

I’m not claiming that New Zealand is perfect when is comes to racism. We’re not. Unfortunately, humanity hasn’t yet evolved to the stage where there’s a single country where there’s no such thing as racism. However, I do think there’s a lot less racism here than in the US.

To this typically dreadful tweet from the US president, Molly Hodgdon had an appropriate reply:

Your “relationship to law enforcement”, like how you keep siding with foreign intelligence over U.S. agencies when it’s convenient for you? Great job you preening sewer peacock.

I began a post about Cesar Sayoc a few of days ago that never got finished. However, this article includes many of the things I did and, of course, a lot more that I did not.
(Via Ann German.)

Next time someone tells you Russian fake news had no impact. https://t.co/yqK9qJA10d

Well, it runs on wind and solar power, and doesn’t use up any land, so that’s good for the environment! How’s this for a cool way to live?!!!

I bet plenty of us know a kid we’d love to show this!

Here’s a device for all you kind people out there:

There’s something about pandas!

Derek, nature’s great hunter, who stalks his prey and attacks with efficiency and precision. pic.twitter.com/EsfKtb30Qr

There’s a good reason we all love watching cats play!

How to #outsmart a #creepy intruder

An oldie but a goodie …
(Via Ann German.)

Not sure who was having the most fun