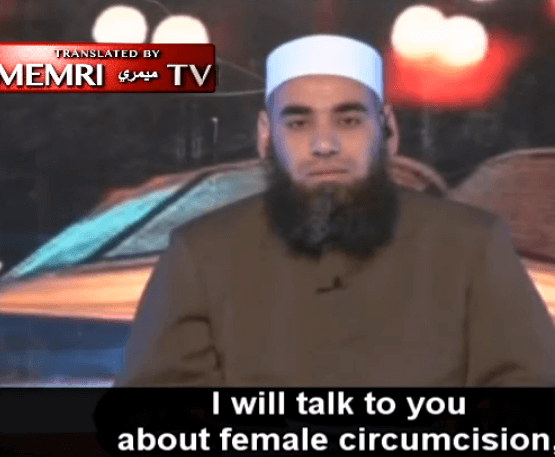 Note to Readers:
There are images of FGM and sexually explicit statements in this post.

Yes, you read that right – an Egyptian imam says FGM (female genital mutilation), which he calls female circumcision, has economic benefits. What’s more, he has a doozy of a theory as to why that’s so.

There’s a pretty big pointer that imam Abd Al-Wahhab Al-Maligi’s theory is going to be dodgy from the start. He refers to the Protocols of the Elders of Zion. Part of the reasoning behind his cognitive dissonance is a conspiracy theory. Unfortunately, there are still tens of millions of people, most of them Muslims, who believe the Protocols are real.

It is not only Muslims who believe the Protocols are real. White supremacists consider Jews have fooled Europeans into believing it’s a fake. It is also an article of faith for conspiracy theorists, especially on the far right.

Protocols of the Learned Elders of Zion 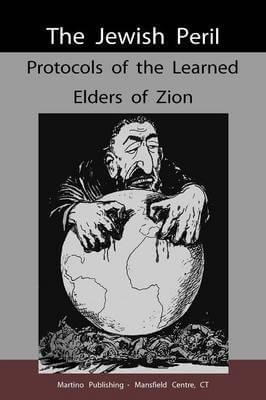 For those who’ve never come across the Protocols of the Learned Elders of Zion, it’s an anti-Semitic publication written by Russian Serg’iei Nilus in 1901. The Times of London was successful in debunking it in 1921. Nilus writes it as if it’s the real minutes of a meeting about the Jewish plan for world domination. A group of Jewish leaders supposedly discuss how to destroy the morals of gentiles and control the world press and economy. Their goal is to rule the world.

According to Wikipedia, US mogul Henry Ford paid for the printing and country-wide distribution of 500,000 copies of the Protocols in the 1920s. They also say some teachers in Germany were assigning the Protocols, “… as if factual, to … German schoolchildren after the Nazis came to power in 1933 …”.

Here’s part of the blurb from the Book Depository website:

The Protocols of the Elders of Zion is a tract alleging a Jewish and Masonic plot to achieve world domination. Purportedly written by a secret group of Jews known as the Elders of Zion, the document underlies 24 protocols that are supposedly followed by the Jewish people. … The forgery contains numerous elements typical of what is known in literature as a “False Document” a document that is deliberately written to fool the reader into believing that what is written is truthful and accurate even though, in actuality, it is not. It is also one of the best-known and most-discussed examples of literary forgery … The forgery is also an early example of “Conspiracy Theory” literature.

The Protocols of the Learned Elders of Zion and Hamas

The Protocols are even part of the founding documents of terrorist organisations. The Hamas Charter (formally ‘Covenant of the Islamic Resistance Movement’) was written in 1988, 67 years after the debunking of the Protocols. However, Article 32 of the charter’s 36 articles refers to it as if it’s real. The Hamas Charter is viciously and violently anti-Semitic. The first two paragraphs of Article 32 (from the Yale University translation at link above):

World Zionism, together with imperialistic powers, try through a studied plan and an intelligent strategy to remove one Arab state after another from the circle of struggle against Zionism, in order to have it finally face the Palestinian people only. Egypt was, to a great extent, removed from the circle of the struggle, through the treacherous Camp David Agreement. They are trying to draw other Arab countries into similar agreements and to bring them outside the circle of struggle.

The Islamic Resistance Movement calls on Arab and Islamic nations to take up the line of serious and persevering action to prevent the success of this horrendous plan, to warn the people of the danger eminating from leaving the circle of struggle against Zionism. Today it is Palestine, tomorrow it will be one country or another. The Zionist plan is limitless. After Palestine, the Zionists aspire to expand from the Nile to the Euphrates. When they will have digested the region they overtook, they will aspire to further expansion, and so on. Their plan is embodied in the “Protocols of the Elders of Zion”, and their present conduct is the best proof of what we are saying.

Personally, I support a two-state solution to solve the Israel-Palestine conflict. However, as long as Hamas is part of the mix, their Charter makes it clear that is not possible.

Go here to watch video on MEMRI‘s website, where bits of my website won’t get in the way.

‘I will talk to you about female circumcision, from the medical, religious, economic, and historical perspectives. So lend me your hearts and ears. …

‘The discussion about female circumcision goes back to the past century. The first time that this subject was debated extensively was in the past century. Who were the first to talk about it? The Jews. They do not want Islam or the Muslims to be pure, developed, and civilized, so they started talking about it. …

In The Protocols of the Elders of Zion it is written: ‘We must strive for the collapse of morals, so that it will be easier for us to dominate the world.” …

Just What is Abd Al-Wahhab Al-Maligi Talking About?

Abd Al-Wahhab Al-Maligi would have us believe that not performing FGM will cause a collapse of morals. This is a clear reference to the ridiculous theory that women who do not undergo genital mutilation are sexually over-active. Of course, as in most religions, just about everything to do with sex is sinful and religion uses it to retain control.

I’ve written before about the idea that even the most mild forms of FGM have the reputation in Islam of controlling female sexual behaviour. Regular remembers may remember the leading Russian imam Ismail Berdiyev from my post ‘Making Excuses for Islam and FGM‘. His public statements made clear his opinion that “… there would be no debauchery on earth …” if FGM was universal. In the same post, I present evidence of the same belief in several other countries.

Abd Al-Wahhab Al-Maligi has a take that is actually new to me though. It’s all a Jewish plot! Jews don’t want Muslims to perform FGM because it will lead to immorality amongst Muslims and therefore their collapse as a society!

When Al-Maligi says, “Someone who is uncircumcised will be afflicted with many serious diseases,” he is talking about STDs. And the money “… the state must spend on his treatment …” is on the men who contract those STDs. Because, in Al-Maligi’s warped-by-conservative-religion mind, the result of not circumcising women is that they will all go about forcing men into sexual activity that will result in the unfortunate men contracting STDs.

What is it about Egyptian men that makes them unable to use condoms, or perhaps just say, “No.”?

The evidence Al-Maligi uses to address the medical criticisms of FGM are, again, dodgy at best. He says Egyptian women bear more children than European women, therefore FGM doesn’t cause infertility. All this proves is that you can make statistics prove just about anything through selective use.

He is accurate that there is more FGM in Egypt than Europe. In 2013 the UNICEF estimation of the level of FGM in Egypt was 91%. There is no estimate of what the rate is in Europe, but it’s safe to say it’s a lot lower than that.

Al-Maligi is also accurate that the fertility rate is higher in Egypt than Europe. In 2014 is was 2.87 births per woman in Egypt versus 1.58 in the European Union. Despite what he says though, that’s not the highest rate in the world – Egypt comes in at 62/223 countries and territories. (First place belongs to Niger at 6.89 which is well over double Egypt’s rate.)

The important point is, of course, that the procedure of FGM itself is dangerous for women. Even those carrying out the most mild forms of FGM often do so in unhygienic circumstances and therefore there is a risk of infection. Any infection in the pelvic area can lead to infertility.

The worst three forms of FGM.

Al-Maligi tries to claim that FGM is “preventative medicine”.

Even if the surgery is carried out in the best possible circumstances, the fact remains that Type I FGM destroys a woman’s ability to fully experience sexual pleasure for life. This means that she is more likely to bleed during intercourse and is therefore, throughout her life, at greater risk of infection. She is also therefore more likely to suffer from painful urination and UTIs (urinary tract infections).

These are just the most common issues with Type I FGM. There are many other issues. FGM creates problems. It is decidedly NOT “preventative medicine”.

FGM and the Muslim Brotherhood

In 2008 13-year-old girl Soheir-Al-Batea died as a result of FGM. Many locals still do not hold the doctor at fault in the case. However, the doctor is to be tried for manslaughter, though the whole process is taking an extremely long time.

Hamas, of course, is a an offshoot of the Muslim Brotherhood.

It’s perhaps a sign that the government is losing control when someone can come of television and openly advocate for a procedure that is not only illegal, but abusive. However, women’s empowerment is increasing again in Egypt, and it may be that Al-Maligi has less support than he would like. We can only hope.