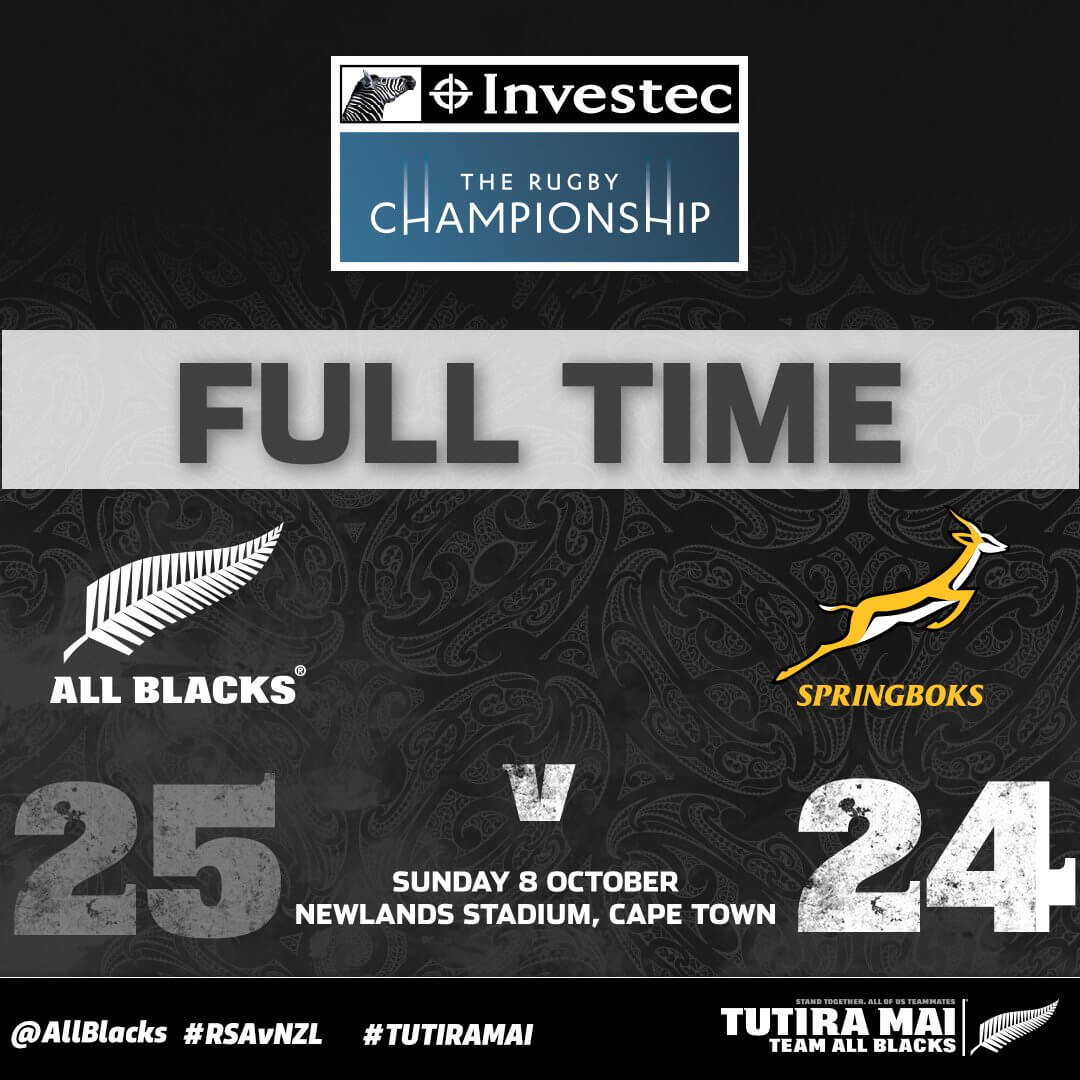 I’m happy to report that the New Zealand All Blacks won again! They played the South African Springboks in the early hours of this morning. This was the last game of “The Investec Rugby Championship” competition for both teams for this year. The All Blacks got through without losing a game and won the competition.

(The other two teams in the competition are Australia and Argentina. They played in Argentina this morning. Australia won 20-37.)

As you can see, the score was very close! There’s no doubt the All Blacks are currently the best rugby team in the world. (It’s a very good time to be an All Blacks fan!) However, as regular commentator nicky (who lives in South Africa) says, if any team is going to beat the All Blacks right now, it’s the Springboks. They proved their ability this morning. The best player on the field was a ‘Bok – their hooker Malcolm Marx. He was amazing!

Anyone who knows anything about rugby expected a close game between these two teams. That’s despite the All Blacks beating the Springboks 57-0 just a couple of weeks ago. Though the All Blacks deserved to win that game, the score wasn’t a true reflection of how the Springboks played. They wanted to prove that today. They’re also much harder to beat in South Africa. They get a great lift from the support of their home crowd.

Nicky asked the question about whether the All Blacks first try should have been awarded in the comments on another post. His question was whether there had been downward pressure as the rules require. The New Zealand commentators weren’t sure either. Their reading of the situation is that the All Blacks player knocked the ball back and the required downward pressure came from the scorer’s torso. They did agree it was a controversial try though.

The other big news in New Zealand is that the special votes from our election two weeks ago have finally been counted. As a result, the National Party has lost two seats and the Labour Party and the Green Party have gained a seat each. That means the Labour Party is now in a much stronger bargaining position for coalition talks. They now have far more credibility in forming a stable government with the Greens and NZ First. The National Party, of course, still considers they are in the strongest position as they still have the most seats. Also, they only need one other party to form a coalition.

We expect to know the result of the coalition talks on Thursday.

Source: NewsHub. (Click pic to go to source and more data and results.)

I still can’t believe that tens of millions of people gave their votes to Trump despite this tape. (Not to mention the multiple other occasions he treated people like crap.) Donald Trump is a revolting, disgusting, ignorant, dishonest, piece of $hit. Any questions?

Update:They did receive permits to have this protest. Permit says protest is “against Trump being a sexual predator” https://t.co/bhBOfegi16

Joe Biden has it right here. He’s also saying exactly what Hillary Clinton says, but when she says it, the response is different. People say, “it’s sour grapes” or “lock her up” or “she needs a new hairdresser” or “I hate her voice.” A hell of a lot of that is just misogyny. (I wrote about some of that here.) I heard Greg Gutfeld say on Fox News that she’s obsessed with Trump! For goodness sake, he’s president! Of course there’s a focus on him, and he loves it. The real question is, “Why can’t Trump stop focusing on her?” The answer? Because deep down he knows he lost the popular vote. More importantly, he would have lost the election without the help of the Russians and James Comey.

Joe Biden is warning Americans that Trump is taking them down a ‘dark path’ pic.twitter.com/mnECofmrVG

This could go on for hours …

I sent out my own anti-Trump message yesterday.

This is one of the most shocking videos I’ve ever seen.

Here are some more of my own tweets on this topic. It’s less than half what I tweeted, so you got off easy!

Politicians and the gun industry … pic.twitter.com/CTbAcskNyR

The GOP takes a knee … pic.twitter.com/nT4n8Q5wOr

Imagine if Americans responded to other tragedies the same way they responded to mass murders … pic.twitter.com/9UVKHNSViL

Nothing to see here. Move along. pic.twitter.com/4BF0yO9uqw

The result of mass shootings … pic.twitter.com/vM0MwzZ2P4

If only! #NRA Terrorist pic.twitter.com/RM1rH2iFHu

As Ann German said when she forwarded this to me: “Scary.”

Actual unedited photo on I-10 East outside New Orleans, just ahead of #Hurricane Nate pic.twitter.com/HUrm8paNnV

This is part of the origin of how woman are viewed in Western culture.

According to Jewish folklore, Lilith was Adam’s first wife, a half-woman half-snake. pic.twitter.com/6JN0ciEZg7

Two collided bullets from the Battle of Gallipoli, 1915-1916. pic.twitter.com/ljczzchiJD

My mother tells me ‘Yellow Submarine’ was my favourite song when I was a toddler. I still think it’s great!

This finger dance by a group from Japan is so cool. (I found it via Ann German.)

What a lovely spider!

A male velvet spider (Eresus albopictus) from the Israeli desert, complete with a “Punisher” style skull on its face. #arachtober pic.twitter.com/QbiwfjjpZD

I pinched this one from Jerry Coyne! It can go both ways!

What a fantastic story! Wolves are cool!
(Via Ann German.)

Elephants have the humanity thing going too!

You may remember Frida. I posted a video about her working in Mexico City a couple of days after the quake hit. There are so many special working dogs around the world.
(Via Ann German.)

“This is “Frida”, she has saved 52 people so far in Mexico’s Earthquake” pic.twitter.com/gOczxa5con

This time it’s human and animal working together for the rescue.

– she is a mother ❤️ pic.twitter.com/pw7McSmZsG

I thought this was great until he began kissing the dog! That’s a step too far imo!

Another one for my sister Brenda.

Jerry Coyne sent me this one. I think it more than makes up for pinching my tweets!!! Aren’t they gorgeous! ????????

1914. Kittens in costume as bride and groom being married by third kitten in ecclesiastical garb. Holy catrimony pic.twitter.com/0LmvuHuv5u

‘The vet will never find me here’ pic.twitter.com/dm14LaZDaj

Here’s a challenge. Work out where one cat finishes and the other begins! Lovely aren’t they?

Another wee sweetie. My paws are up! Don’t shoot!

My Annie is on the mend pic.twitter.com/xqaeM4FFKn

Isn’t this Caracal kitten awesome?! I love these cats!

what kind of pokemon is this pic.twitter.com/zBwxosVwro

This is a pic of Ivory (tiger) and Saraswati (lion). They are the parents of four white Liger cubs. Their names are Yeti, Odlin, Sampson, and Apollo. They live at a sanctuary in India. Go to the link for some very special pics!

A White Lion And A White Tiger Just Had Babies… And They Are The Cutest Things On The Planet. https://t.co/uahYGKVgK7

Kitten getting tucked in pic.twitter.com/jxPaho473t

When I saw the ball, I thought this was going to be a dog video. Instead, it’s one of the cutest kitten videos ever! There’s nothing like watching a kitten playing to make you feel good.

There are a few topics I want to write something a bit more on than a homily at the moment, and that takes time. Hence, there’ll be no Tweets and Homily post tomorrow (Monday). I’ll probably miss at least one day later in the week too. I’m not sure which day(s) yet though. If possible, I’ll let you know in advance.

Thank you so much everybody for continuing to support me as I try and work out just what I’m trying to do with this website. It means a lot to me.