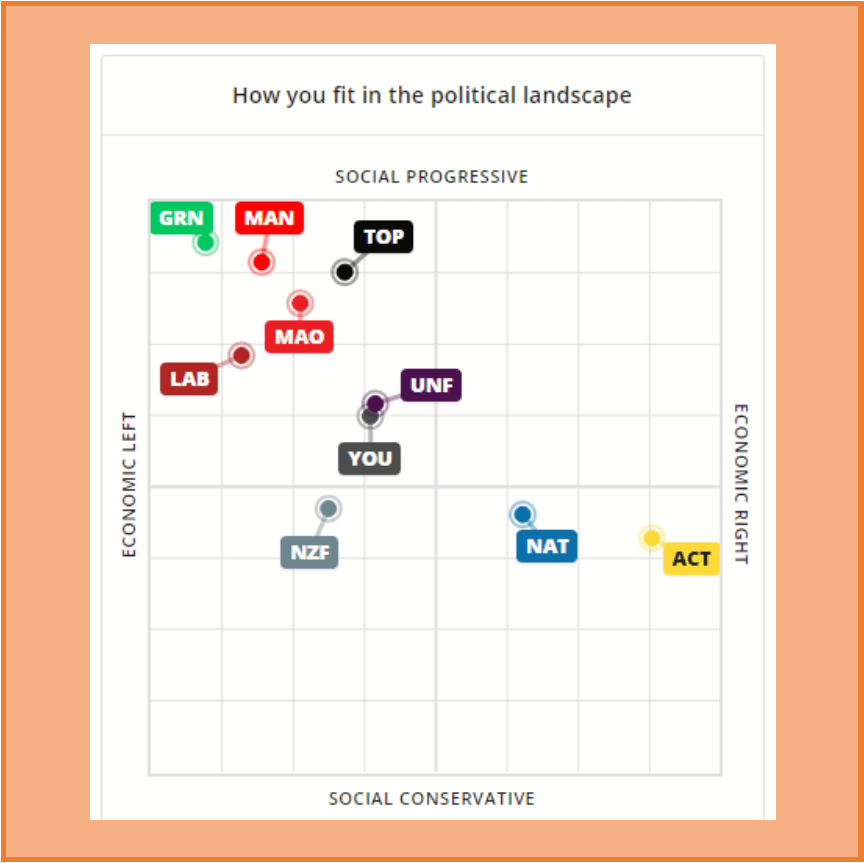 I’ve been back home for three days now but I’ve been feeling ghastly and wasn’t really up to tweets. I probably could’ve done it, but that would have meant a delay in my recovery and I had to be well again by today. Why? It’s election day in New Zealand and I’ve never missed voting since I became eligible in 1984.

I think voting is really important and everyone should do it if they possibly can. I have no time for people who say that they’re not voting as a “protest.” Not voting is NOT a protest, it’s an excuse for laziness. A protest vote is rocking up to the polling place and spoiling your ballot paper in some way. You can cross out all the names, write in a new name, or just leave it blank. But not voting, in my opinion, is abandoning your responsibilities as a citizen.

Just before I left on Monday I got a phone call from a political pollster. Naturally one of the questions was who I would vote for if the election were held that day. I gave them an answer, but the truth was I had yet to make a decision. Usually I’m sure well in advance, but this year it was a more difficult choice. However, I have now done my duty and voted.

I think it will be a fairly high turnout election this year. Last time turnout was 76.77%, which is low for New Zealand. It’s unlikely we’ll have a final result tonight though. The polls are all over the place and it looks likely that one of the smaller parties will get to decide which major party leads the government. Unfortunately, that smaller party will probably be NZ First, which is the one party I can’t understand anyone voting for. I have an great dislike for their leader, Winston Peters, and I think he is a risk to our extremely stable democracy.

We have a proportional representation system in New Zealand called MMP, or Mixed Member Proportional. (You can read all about it here.) Because of the way the election is going, even if the party that leads the government doesn’t change, their coalition partners likely will. A party has to get five percent of the national vote, or win an electorate set, to get into parliament. The party I like most probably won’t do that, therefore voting for them is a waste of a vote. It’s a bit like the 2016 elections in the US. If you live in one of the states where the election is close, it’s important to vote for one of the main parties.

The party that is closest to my own opinions is United Future. There is a non-partisan survey you can do to see which NZ political party your opinions are closest to. It’s called Vote Compass, and you can try it out here. When I did it, it gave me confirmation of where I see myself. (That’s one of the graphs I got from Vote Compass in the pic.) The new leader of that party, 34 year-old Damian Light also impresses me a great deal. However, as I said, there’s not much point voting for them. Further, the race between the two main parties – National and Labour – is very tight. I have a definite preference for one over the other and so I voted for that party to give them the best chance possible of forming a government.

On to the tweets. Some of these are as much as a week old now – I’ve got a fair bit of catching up to do!

I have a feeling I’ve seen this before, but if so it’s worth posting again. This man is a hero!

I have a particular fondness for snow leopard paws. They’re even more gorgeous than those of other cats.
(Via Ann German.)

In the #snowleopard‘s world, ordinary rocks are message boards for these solitary #cats to exchange information. pic.twitter.com/kD6IwXipfh

It’d be fun making something like this for your cats to explore, then spending the afternoon watching them.
(Via Ann German.)

Any space will do …

Personal space doesn’t exist when you have a cat pic.twitter.com/sOxcLcA4hY

What a lovely thing to be holding …

This reminds me of our Golden Labrador who was like this whenever we came home. He was a wonderful dog – and I say that as someone who much prefers cats.

Find someone who’d be this excited to see you home ❤️ pic.twitter.com/pzKzgvCVG4

This dog is a hero! I love Labradors – ours saved my life once.

The tail goes down when it actually buries the nut for real! Have I learnt squirrel talk?

Sea otters are so lovely.

I hope people realize just how serious this is. (And remember Dr Who!)
(Via Ann German.)

bees are officially on the endangered list in the US #savethebees pic.twitter.com/o168swGhfX

This is so cool!
(Via Ann German.)

Pareidolia results in this being known as the Duck Orchid. We can all see why!

???? #LoveFlowers Most Beautiful but Strange Flowers

Caleana is commonly referred to as the Duck Orchid pic.twitter.com/HchhdMqvDK

Google even gave us a special Doodle for the day!

I wish this cartoon was available when I did my recent post: ‘Donald Trump and the Evangelical Christian Nationalists‘. It would have fit right in there.

I think what Kathy Griffin did was inexcusable. Quite apart from anything else, two wrongs don’t make a right. I didn’t Re-tweet this, but I draw your attention to it anyway. A lot of those complaining about Griffin were completely silent about similar protests against Obama.

Another fine display of ignorance of the rules of both logic and diplomacy from the US Commander-in-Chief.
(Via Ann German.)

The prescience of Stan Lee?
(Via Ann German.)

Dr. Doom addresses the United Nations, from the Spider-Man newspaper strip. 1977, or 2017? pic.twitter.com/JQ6a7frSUh

Why are there so many idiots in US politics? Some of them, like this guy, are also downright scary.

This candidate for Alabama Attorney General thinks he and his militia can stop legal abortions pic.twitter.com/AmGiqsW7t5

Why is that so many USians just don’t get this?
(Via Ann German.)

Most Americans prefer Obamacare to Graham-Cassidy… So, why are the Neo-Nazis in the #GOP trying to destroy it?? pic.twitter.com/m0jo96xjQK

Stupid is as stupid does, and I don’t just mean the guy in the tweet. The 2006 decision by the US Supreme Court to change the interpretation of the 2nd Amendment of their constitution to mean that everyone can carry a firearm is about as stupid as it gets.
(Via Ann German.)

A member of our well regulated militia brandishes a gun at a woman because he didn’t like her bumper stickers. https://t.co/hiIhuBvtEw

American Church of the Firearm … pic.twitter.com/CuliYZjYPl

Everybody is born to use their right-hand. It’s the influence of the devil that makes you use your left-hand. You could choose otherwise.
(Via Ann German.)

Just say no to left-handedness. pic.twitter.com/nuNr3DToyp

I was sent this on Twitter. Of course I Re-tweeted and Faved it!

@HeatherHastie God Bless You All Who Live in Denial of Evidence 4 Creation! Peace 2 YOU All in Old Zee-Land! pic.twitter.com/rd49xCZHpX

It’s often hard to recognize you have the same faults as others … pic.twitter.com/xwnYVEffgk

We need more of this in the world.

This photographer is helping kids with disabilities unleash their inner superheroes pic.twitter.com/MZFcCYZjC8

Someone’s having an existential crisis here …

It’s so cool that we can understand what’s happening because of the work of scientists.

An F-22 Raptor pulling so many Gs, the low pressure air over the fuselage gets cold enough for the water to condense pic.twitter.com/PsudX88ABd

Baby Locutus of Borg (with apologies to ST:TNG).
(Via Ann German.)

Keep those floors clean for your cyborg baby. pic.twitter.com/GsrCXXbrKs

This is appalling. Imagine a young girl being hounded by three men to cover her hair or her car will be impounded. The Iranian government wastes a lot of money employing men to roam the streets looking for women who do not comply with their medieval rules. And what sort of men take jobs like this? It’s not proper policing. It doesn’t make the public safer!

Put your veil into! No I’m exposing you! This lady bravely films the undercover police attacking her in the street
پوشش من به تو مربوط نيست pic.twitter.com/2bl5pPGeqq

Good on you Great Britain! Standing up for what’s right. (Now we just need a few Western countries to start being more critical of Saudi Arabia.)
(Via Ann German.)

The situation in Yemen is complex, and there are rights and wrongs on both sides. However, we can do without attacks on civilians.

The bomb that killed civilians and injured 5-year old Buthaina in Yemen was made in the U.S., says Amnesty International. pic.twitter.com/og5I1x0Z3t

Another one of mine.

The GOP are the only major political party in the world that won’t admit the reality of Climate Change. pic.twitter.com/lbTK82nxkK

Some of the flooding in the Caribbean …

The Caribbean is left with massive flooding and devastation after hurricane #Maria. A look at the damage from 4 islands: pic.twitter.com/blTFiN7Qzg

And to finish off, a flood from the pages of history …