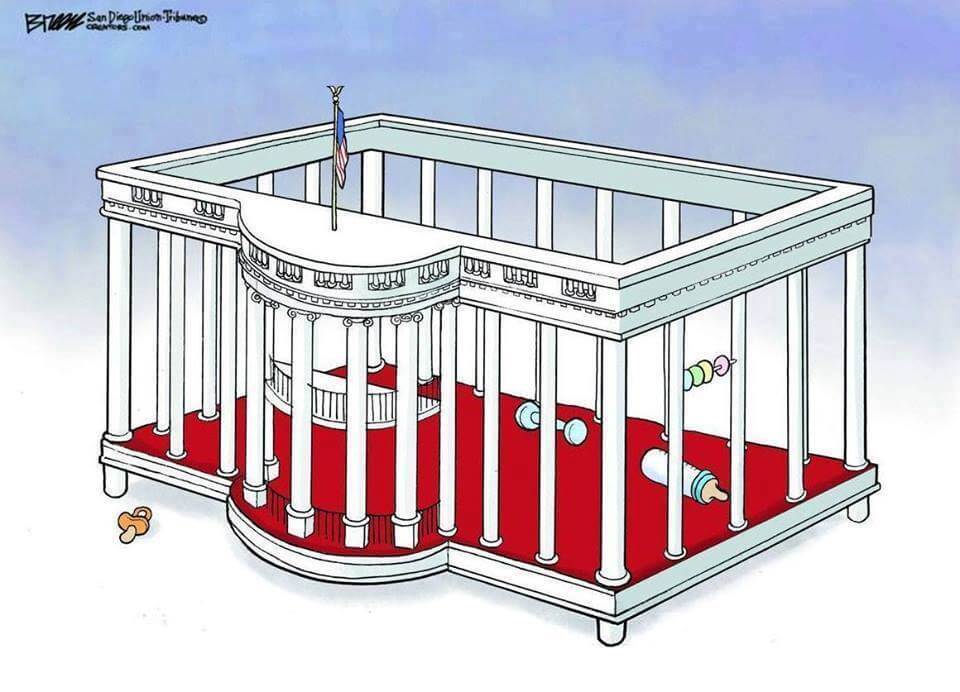 Whatever you think of President Trump’s policies, you can’t pretend that he’s presidential. His daily tweets alone are enough to condemn him in the behaviour stakes. He seems to have no appreciation whatsoever of the dignity of the office he holds.

And we all know there is much worse going on than the frequent tweet storms. Senator Bob Corker has referred to the White House as “adult day care” more than once. When asked about that by reporters, not only didn’t back away from the comment, he said all his colleagues thought the same.

And, not a single one of those fellow politicians came out and denied it. Not one.

In fact, two more senators have instead said similar things. John McCain and Jeff Flake have both made their personal disdain for the president clear to all. Senator Flake even used his farewell speech from the Senate to eviscerate the manner in which Trump does politics. (See yesterday’s political tweets.)

The important thing to note with these three men is that they are seen as men of integrity by most, and they are from Trump’s own party.

One of the worst things is the constant lies. The US public should be able to rely on their leader to tell them the truth. There will, of course, be times, when he can’t tell them things. That’s fine. But he should not lie.

And it’s not as of he’s lying about things that people could debate. He insists things that are clearly not true, are true. Things that can easily be checked. When he’s called on his lies he either blames someone else, makes excuses, or insists what he said is true.

But no matter how many times he says there were more people at his inauguration than Obama’s, the fact will not change. Obama’s crowd was bigger. He also did not win the popular vote because three million people illegally voted for Clinton. It is a lie that he would not benefit from the tax plan he proposes. His job approval numbers do not compare well with previous presidents. And, despite what he days, he did not achieve more in his first 90 days than any US president in history.

On 20 October last year, Trump said to the media that the stories women told about him sexually abusing them had “largely been debunked.” This is not true either of course. I really hope that the current change in attitude we are seeing in the US where men who have got away with bad behaviour for decades reaches him. It disgusts me that so many people voted for him within days of his boasts about groping women.

On 20 March this year he even said that the NSA and FBI told Congress that the Russians didn’t interfere in the US elections! If there are still any USians apart from Trump who believe that, they’re blind or stupid. It’s also clear that some US citizens must have helped the Russians, and likely that some of those were on Trump’s campaign.

Whether Trump himself was involved in collusion with the Russians, or knew it was happening, we don’t know yet. However, he has told multiple lies in relation to his connections to Russia. Why would he do that if he has nothing to hide?

For a full list of Trump’s proven lies since declaring himself a candidate for president, see Politifact.

The news isn’t getting any better for President Trump. Perhaps he should think about pleasing the majority of his citizens instead of the minority who make up his base.

Many of Trump’s mis-steps are of his own making. Often things are going fine until he sends out a stupid tweet or series or tweets, usually in the early morning or late at night. Impulse control is clearly an issue.
(Via Ann German.)

In general though, the public now has more confidence in the Democrats than the Republicans in every area.

Public has more confidence in Democrats than Republicans to handle country’s issues. pic.twitter.com/ysCOBbDKOd

Some background on the Rohingya Muslims in Myanmar.

Who Are The Rohingya and Why Are They Fleeing? https://t.co/yaTQM5URCU via @YouTube

I could equally put this in the “Religious Tweets” section because we all know that it is religion that creates these sick attitudes.

WTF: This Egyptian lawyer thinks men have a ‘duty’ to rape women in ripped jeans pic.twitter.com/VbTU1gQbeN

Women used the Day of the Dead celebration in Mexico to protest against the high rates of violence against women there. The attitude is part cultural, part religious.

Hundreds of women protested femicide in Mexico City — they carried photos of their murdered sisters, daughters and friends pic.twitter.com/Y5na8UU0Nw

Eight different people are accusing him! Looks like he can’t blame individual disgruntlement, as so many abusers try to do.

I’m shocked USians have to pay at all to use National Parks. In NZ, entrance to all National Parks is free. The only charge is to stay overnight in huts or campgrounds. About 0.5% of the budget is spent on National Parks and their facilities, and it’s generally recognized an increase is required.

I’m not sure if this is going to work – there are calls for it to be deleted. It’s hilarious, but I can see that a lot of self-righteous hypocrites complaining about it.

I took a bechdel test last year, guess what? A+ pic.twitter.com/88FZI6KQ2b

It’s not just Iran that’s seen changes in the way women are expected to dress since conservative religious men took over.

Many USians believe the myth that they have the best healthcare in the world. They actually rank last in the OECD. Even many non-OECD countries rank ahead of them. None of us in those other OECD countries would claim our systems are perfect, but the US could clearly learn a lot by examining a few of the other systems.

Why Is U.S. Health Care So Expensive? https://t.co/YMbvkwyUqv via @YouTube

This time-lapse of braces on teeth shows how dynamic the human mouth can be! pic.twitter.com/ltjcyWKqSe

I hope this means that they can stop me feeling hungry. I’m on medication that leaves me feeling permanently hungry which makes weight control extremely difficult, especially as I’m unable to exercise.

Gorgeous pic of the Taj Mahal.

The religion attached to them is pretty awful, but mosques are beautiful buildings.

We need to start writing letters again because of wax seals pic.twitter.com/ytwZOYKEz5

Just what your average gun nut needs – a revolver that shoots more bullets before reloading!

A couple more clips from the upcoming series Blue Planet II have been released.

Filming Hundreds Of Mobula Rays At Night – Blue Planet II Behind The Scenes https://t.co/HPqzlL3dZ6 via @YouTube

In this one, you can use your mouse to drag the picture around to see 360°.

360° Diving Under Icebergs With A Seal In Antarctica #OurBluePlanet – BB… https://t.co/zwj9z4H0af via @YouTube

I assume these are actually freshwater fish that need to get from water hole to water hole without checking, but they can go in this section anyway.

These fish are called climbing perch, and yup, they are walking on *dry land*. pic.twitter.com/7wQNQ5EN6m

Telling the wife to hurry up! It’s time to get to the restaurant!

this swift #parrot is inviting his girlfriend to lunch with these happy chirps – she’s incubating their 3 eggs #endangeredspecies #cute pic.twitter.com/z81OZ8DvWj

The evolutionary adaption of this moth is amazing – a 30 cm (12 inch) long tongue!
(Via Ann German.)

Morgan’s sphinx is a moth that is specifically adapted to extract nectar from the comet orchid. The moth’s tongue measures an incredible 30 cm, allowing it to reach the sweet fluid at the bottom of the nectary (a nectar secreting organ that is unusually long in the comet orchid). pic.twitter.com/jby53AtcEA

Insects always look to me like I imagine aliens would look. They’re so different from we mammals.

This update from Slimbridge includes insects, birds, and amphibians, including a frog that is almost impossible to spot in leaf litter.

And what about this? Adorable!!!

This is a baby aardwolf. You’re welcome.

The look on the owl’s face!

‘We saw what you did there’ pic.twitter.com/yuh8HjNUGA

Faith is so engrossed in #BluePlanet2, she allowed her favourite toy to face-plant the floor #BluePlanetPets pic.twitter.com/M7ZlNQWFax

That face when you accept you’re no longer the baby of the family pic.twitter.com/k2m4d3UjtS

I’ve never heard of Tippi Hedren, but I assume she’s a Hollywood actress who’s her generation’s equivalent of the Kardashians et al. (I wouldn’t recognize them either.) Nice lion though.

LIKE CATS OR WRONG!
An awesome Tshirt for cat lover.
Printed in the USA!
100% SATISFACTION GUARANTEED!https://t.co/PwEzU2xKmy pic.twitter.com/H5MeBDpIyA

It wanted the toy!

The humans won’t play with me. You’re my last hope!

‘No sleep, only throw’ pic.twitter.com/D6hCevoUiY

I nearly got him!

This could be my fate!

Where do you see yourself in 10 years? pic.twitter.com/GpE1LwRQd8

When you check to see if bae is still mad at you pic.twitter.com/VBfIofYKL6

That’s what boxes are for!

A box for every cat, and every cat in it’s box! pic.twitter.com/veSaCe0ZTf

am I doing it right? pic.twitter.com/7RrmyqIPAw

How I feel today.