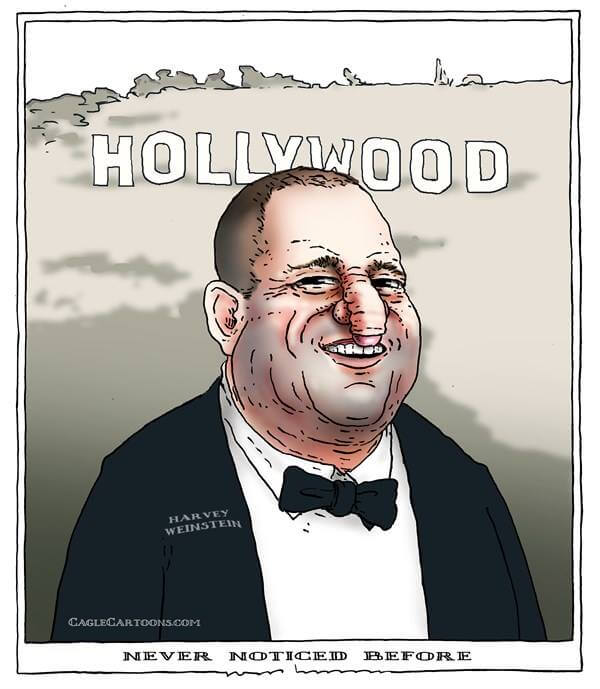 Given the heinous nature of the actions of Harvey Weinstein, there are still plenty of tweets about him in the Twitterverse. He’s getting plenty of attention elsewhere too, and rightly so. In today’s fast moving news cycle, things get old too fast too often.

Today Jerry Coyne was one of those who wrote a post about the a$$ho£e: ‘Harvey Weinstein, creep or psychopath?‘. He looks at the issue from a deterministic viewpoint. I was asleep (it was about 4.30 am here) so I wasn’t part of the discussion.

As a determinist, I agree with Jerry’s point of view in relation to Weinstein.

What I want to talk about though is how Weinstein came to be the way he is. Weinstein is the tip of a very big iceberg. There are a lot of men who are as bad as him. However, there are literally billions who are misogynist or sexist to a greater or lesser extent. Many of them, perhaps most, don’t even realize it.

Casual sexism is such a big part of our society that many don’t even realize they’re doing it. And it’s not just men. There are plenty of women that don’t even notice the sexism. They just take it for granted.

One of the things we can do is teach the children in our lives how to treat others. The Golden Rule is to treat others how we would like to be treated ourselves. We must lead by example too. We cannot, for example. tell our children that violence is bad and no way to solve a problem, then smack them when they do something wrong.

The revelations of the sexually predatory behaviour of Weinstein and others has led to an increase in an awareness of this problem in our society. Lets hope it influences people to change their own behaviour and in turn what they model to those they influence. It is the only way to at least reduce this happening in the future.

Ron Reagan, son of the late former president and board member of the Freedom From Religion Foundation made this statement.
(Via Ann German.)

“This man is a danger to the world.” – Ron Reagan Jr. paints a perfect portrait of Donald Trump. #Hardball pic.twitter.com/WAuk7ILWyN

Thank goodness the courts are still following the law, even if the Trump administration isn’t.
(Via Ann German.)

BREAKING: Justice prevailed today for Jane Doe. She was able to get an abortion early this morning. #JusticeforJane

The @GOP arguing about who paid for the Steele Dossier would be like a robber asking who paid the phone bill for the phone used to call 911.

Scott Pruitt has no fu€king idea. He’s the worst of all Trump’s cabinet picks in terms of the mess he’s making, and that’s saying something.
(Via Ann German.)

EPA chief: ‘True environmentalism is using natural resources that God has blessed us with’ https://t.co/6Q2uZPHzfV pic.twitter.com/xThAXSR8ku

I’ve tweeted this before from another source, but it’s worth posting again. We need to see the good stuff from the Obama era that’s still helping to balance the depressing news from the Trump era.

This is truly incredible.

I have no fear of you, my camera is my weapon her! This brave women unveiling herself to protest compulsory hijab while walking her dog. watch how she got attacked by people about hijab an m walking a dog. She is strong and filmed it all for #WhiteWednesdays pic.twitter.com/tA51bt8QQv

The hypocrisy of the religious never ceases to amaze me.
(Via Ann German.)

A 20-mile length of almost invisible wire stretches around most of Manhattan. This wire is known as an eruv https://t.co/GqKZe5P4sY

The eruv allows observant Jews to carry out a range of ordinary activities otherwise forbidden on the Shabbat by creating a symbolic “home.”

A single break in the line voids the symbolic space, so twice a week Rabbi Moshe Tauber drives the length of it to perform maintenance.

A storm in a teacup!

I remember this! Do you?
(Via Ann German.)

Love it! (That’s one way to hide the bomb damage!)

What a fantastic kid!

Demonstration of the Physics of Inertia pic.twitter.com/TNbJDitdJK

If you’re in the UK, please consider giving your vote to the amazing people at SWCC. They named a hedgehog after me! They must be good!

‘SWCC Hedgehog Hospital – vote for us now in the Aviva Community Fund’ https://t.co/ybSJzRSNNK

This is one of the reasons why the good people at SWCC need your help.

We’ve re-read the rules and think we need lots of votes to even get through to judging! Keep voting for us pls!! https://t.co/HMTjUjV9tL ???? pic.twitter.com/C99u0dbH2f

Operation Baby Doormice! These gorgeous wee creatures need rescuing because they were born too close to hibernation time. They’re apparently normally weaned at around 40 days, but they’re only 17 days old and mum wants to hibernate.

The big news is that this year the winner of New Zealand’s Bird of the Year competition was the Kea! Yay!!! Thank you to all of you who put in a vote. There were more votes this year than ever before thanks to international interest in the competition, and that means some of you. So, of course, we have to have lots of Kea tweets today.

So pleased to see my favourite bird (this year) has been announced New Zealand’s #birdoftheyear! #Kea Image via. @BioDivLibrary Public Domain https://t.co/ndlDeUsAEK pic.twitter.com/cwkQ0uoT93

NOW: A kea (the 2017 #BirdOfTheYear) in Arthur’s Pass has been taken to hospital w/ lead poisoning after chewing on lead-based nails. pic.twitter.com/41X9MOLQXj

This sick kea got a @nzpolice escort to hospital in Christchurch after being “on the run” for 2 weeks https://t.co/gOLuDzDLsc #BirdOfTheYear pic.twitter.com/pzDWErwvJS

Wananga the kea is taken to Christchurch by the local police for lead poisoning treatment after being on the run for the past few weeks. pic.twitter.com/Hzt0IrCKbX

This is what happens when you unscrew the lid of a peanut butter jar around captive kea (don’t ever feed wild kea). #BirdOfTheYear pic.twitter.com/roiKurUTkN

Had enough yet? I haven’t …

Congrats Kea! You have bested kererū this time… #BirdOfTheYear Animated gif from a stereo image circa 1920. Image courtesy of @Te_Papa pic.twitter.com/FqMgJxyz7d

The curious & magnificent Kea, one of ????????’s cold adapted parrots, has been crowned #BirdOfTheYear !
Here’s one that enchanted me last year. pic.twitter.com/I9EUe9qnWy

Don’t forget to tune into @TVONENZ at 6pm to see how Team Kea were celebrating their #BirdOfTheYear win today. pic.twitter.com/GGXPRqMo1u

I mean how couldn’t you love this charming little thief of a bird. Yeah to the Kea #BirdOfTheYear pic.twitter.com/4a2FXiInkF

First ‘tweet’ of the week from us has to be #BirdOfTheYear – go kea, you good thing! @Forest_and_Bird pic.twitter.com/fV4VXf8ley

Congrats to the kea. This bugger attacked our car while snowed in and stranded in Arthur’s Pass 2012. #BirdOfTheYear pic.twitter.com/oBY8wr0hWR

I haven’t finished yet!

I’ve got a sibling who did this as a toddler. I won’t out the miscreant online. You know who you are!

This is Gus. He carries his blankly around with him everywhere he goes. 10/10 always gotta be prepared for a nap pic.twitter.com/9VUgNJDeDt

This is the kitten I want!

Just a tiny kitten getting excited over virtual fish ???????????? pic.twitter.com/sWUNKSv16T

This bloke has his priorities right!

I LOVE this picture! pic.twitter.com/RfXwAoiOOP

They are one year old today! pic.twitter.com/JUgn2TdlL6

It’s amazing what cats can manage when they want to get in stuff!

I are sad burrito kitty pic.twitter.com/x9cAB2J38L

And they get into some weird sleeping positions too!