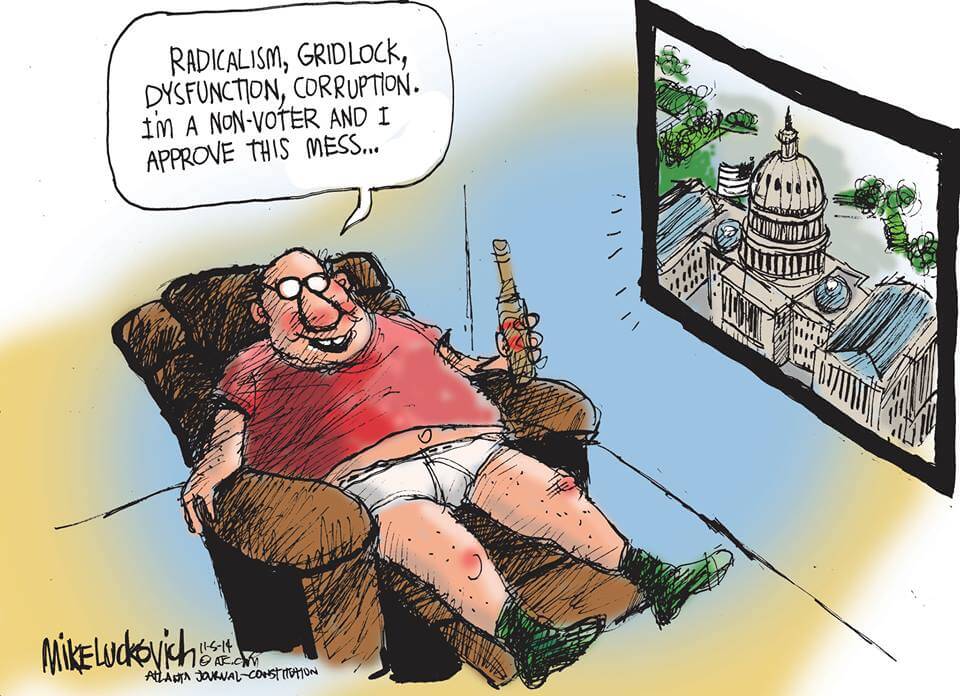 The United States is rightfully proud of it’s origins. There is an underlying premise in the tweets from that country that comes from the First Amendment of their constitution – that they have freedom of speech. It’s a premise that all of us who live in democracies based on Enlightenment ideals rely on.

But politics is broken in the US. It’s been getting worse for years. Those in power have no incentive to change and those without power have little ability to do anything. There are multiple issues, and it would take a book and far more knowledge than I have to discuss them all.

One of them is the failure of many politicians to do what politicians should do: compromise. Politicians are elected to represent all their constituents. Their job is to negotiate and cooperate with other representatives to run the country. Politics is the art of compromise.

But compromise is not what many of them do. Politicians who look out for their constituents, like those Republicans who regularly voted against the disastrous GOP Healthcare bills, are being vilified. There were other GOP politicians whose choice would have been to vote against those bills too, but they didn’t need to stand up, so didn’t.

Other politicians do the opposite of what they are there to do. They take a “my way or the highway” approach on every piece of legislation. As a result, virtually nothing gets done. “Compromise” has become a dirty word, a sign of weakness.

If they got together and did their jobs their collective knowledge could produce some good legislation. But it’s not going to happen in the current atmosphere.

It would help, too, if money didn’t have such a big influence on how politicians vote. But discussion of that opens up a hole new can of worms …

One of my pet peeves about the US (and other) political systems is that they aren’t fair. In the US, gerrymandering is a major problem and few politicians are ethical enough to do anything about it. Both major parties do it, but there’s one that’s much worse than the other. Guess which one?

If there was gerrymandering in football … pic.twitter.com/ltXbf7cWfM

Is the majority of the GOP completely heartless or just lacking in a conscience? I thought they were all buddies of Jesus? How would this move go down with him (if he was real)?

Reminder: Millions of children from low-income families just lost their health insurance, thanks to Republicans’ on-going war on Obamacare pic.twitter.com/ti18MiO6oK

And this is disgusting as well as just plain scary. I thought when I wrote about the North Korea situation a couple of months ago that his UN Ambassador, Secretary of State, and Secretary of Defense had him under control. But he can’t control himself and he’s putting the whole world at risk.

Even Vladimir Putin’s Russia wants Trump to chill out when it comes to increasing tensions with North Korea pic.twitter.com/81Et3h77bD

Some more on the tragedy continuing to unfold with the Rohingya.
(Trigger Warning: This video is very distressing. It includes video of children who drowned.)

Ten Rohingya children drowned after their boat capsized while they were fleeing violence in Myanmar pic.twitter.com/ynLC2xo4xS

These a$$hole$ are at it again.

White nationalists now chanting – “We will be back”. About 3 dozen supporters in Emancipation Park. Plenty of police on standby in park. pic.twitter.com/LuJEsAgxQy

As well as the usual “You will not replace us” and other racist ignorance, apparently they have a new chant in their repertoire. “Russia is our friend.” Now where does that come from I wonder? (Sarcasm alert!)

This man and his mother are supporting White Wednesdays in Iran. The mother says she wants to continue to wear the hijab herself, but thinks women should have the choice whether or not to wear it. Good on her!

This is an old tweet, but it has an important message. It explains why it’s tough saying no.

it’s okay to say no to something!! pic.twitter.com/Iy8bYolapv

While the US Republican party continues to deny climate change, Californians are dying in yet another wildfire.

A historic firestorm is causing thousands to evacuate in California. pic.twitter.com/s37ltzVbMQ

I get that nervous feeling in my loins just looking at this pic! And how did he get down?

A guy with balls; somewhere in the beginning of the 20th century. pic.twitter.com/pHDgundzoi

Look at those two women in the background! What are they thinking? One’s even doing the 1960s equivalent of clutching her pearls!

This tiny chip is a condensed version of the human body pic.twitter.com/uAoqpU3TAH

This is really interesting, and has the potential to revolutionize weight loss and dieting. Science as done it again! If you want to lose weight, I recommend you read the short article in the link.

How do giant black holes grow? New @ChandraXray finding of five pairs of supermassive black holes may give us clues: https://t.co/7M1SaF8CPX pic.twitter.com/PhJLYeGZ9Q

This is something I’ve always wanted to know, but never bothered to find out. My curiosity is now satisfied!

This is where the Great Wall of China ends. pic.twitter.com/AAgkYQ5c0F

These are lovely. I especially love mosaics.

Vibrant Photos of Beautifully Diverse Floor Patterns From Around the World https://t.co/FhaUd3RAHb

This baby squirrel needs its mum!

I’ve said it before and I’m sure I’ll say it again: Sea otters are so cute!

I throw my hands up in the air sometimes, Saying Aaaaa-Yeoh! Gotta let go… pic.twitter.com/ifNpsCtAGF

Octopus doing a great job of nabbing its meal.

Look what this lizard does when you wave at it!

That’s one way to keep warm!

The colours of Mandarin ducks are gorgeous.

Here’s a rare and beautiful sight – an albino owlet.

How many shares for this little cutie? pic.twitter.com/2TJJKpiQxZ

I’d love to know what these two are up to!

I don’t even know. pic.twitter.com/clAmhbn6d7

Maine Coons seem to be getting a lot of attention on Twitter lately. No, that’s not a complaint!