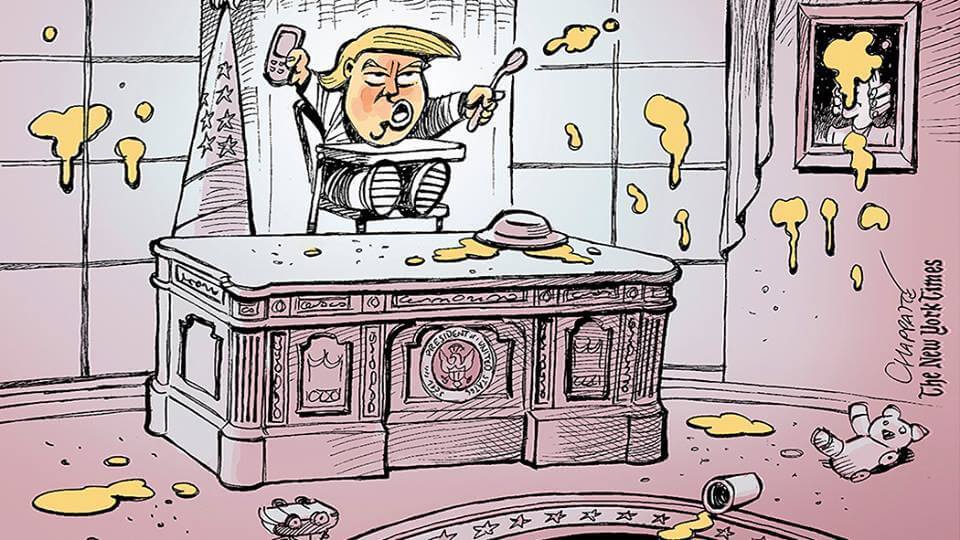 Originally, this post was a fuller analysis of the North Korea crisis. However, it became extremely long, so I’m chopping it into smaller posts. One section of the main post was a look at the way President Trump is handling the affair personally.

It’s clear that Trump simply doesn’t have the ability to handle a situation as complex as North Korea. The complexities and nuances of diplomacy are simply beyond him. In his private working life, bullying and bluster were a big part of his tool kit. Back then there was also the option of throwing in the towel and cutting his losses when things got too tough. However, bullying and bluster have limits in a political and diplomatic context, and a president is unable to just walk away.

He got the vote of many people because they thought he would have the ability to negotiate. His book, The Art of the Deal, gave him that reputation. He clearly doesn’t. In short, this is why the North Korea situation has become a crisis.

First though, a quick comment on Trump’s body language.

One of the things I’ve been noticing about Trump in recent months is his body language in certain situations. We all know that he seems to have a particular admiration for strong-men. Trump’s praise of dictators like Saddam Hussein, Vladimir Putin, Rodrigo Duterte, Xi Jingping, Abdel-Fattah el-Sissi, and even Kim Jong-un himself is notable. At the same time he criticizes his allies in democracies. The leaders of Australia, Mexico, Germany, and Canada have all heard the sharp edge of his tongue. 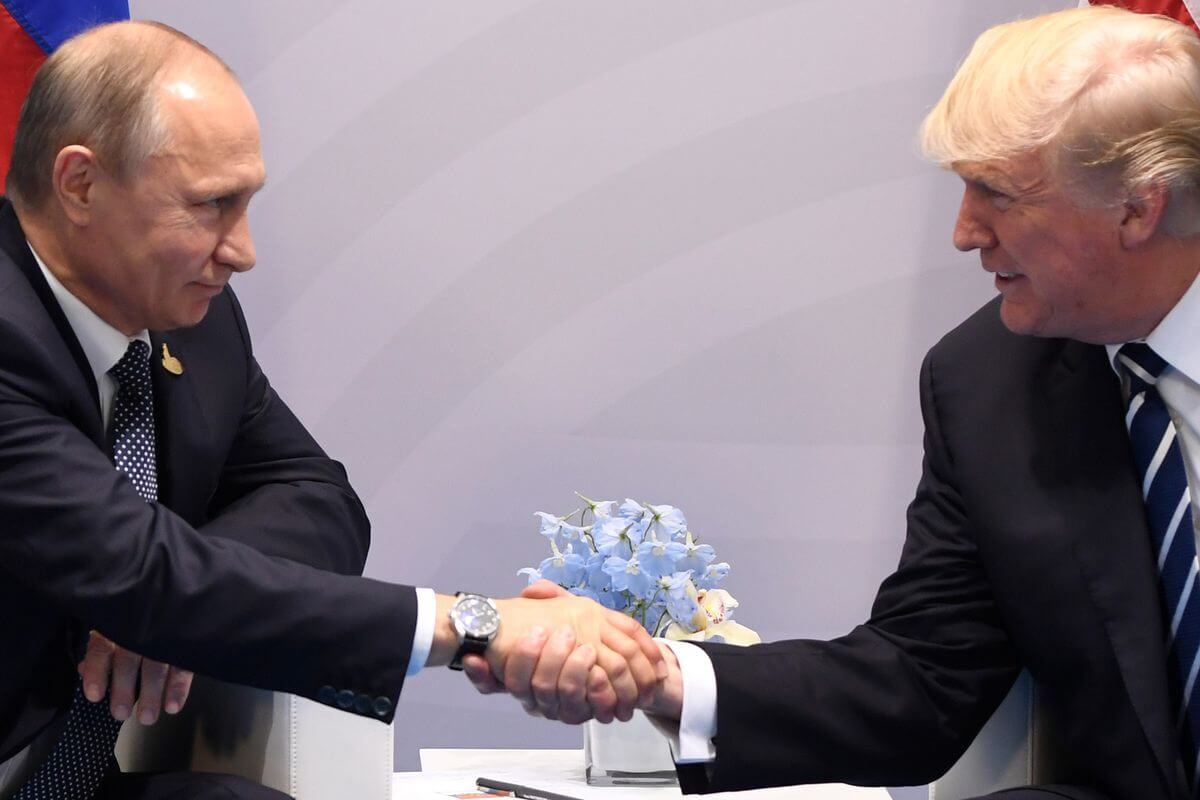 Trump and Putin shake hands before their bilateral meeting on the sidelines of the G20. (Source: Saul Loeb/Getty Images via Vox. Click image to go to Vox article.)

However, in Trump’s meetings with Putin, something besides Trump’s open regard for this thug caught my eye. Trump acts like a submissive partner around him. Trump is known for attempting to dominate other world leaders via handshake. So much so that he doesn’t know what to do when it comes to shaking hands with a powerful woman. His refusal to shake the hand of German chancellor Angela Merkel was a small and petty act.

With Putin it was different. In fact every clip I saw had Trump’s hand underneath Putin’s. In addition, Trump appears to be unconsciously trying to make himself appear both open to him, and physically smaller to the actually much smaller Putin.

Just a few days ago I thought the potential for a solution to the North Korean issue was good. US Secretary of State Rex Tillerson was making the right moves and saying the right things. The US Ambassador to the UN, Nikki Haley, got a unanimous agreement for new sanctions on North Korea. That’s a huge achievement because China and Russia frequently block such moves. It’s something the president has every right to celebrate as it will be a big help in the goal of finding a diplomatic resolution. General James Mattis, US Secretary of Defense is working well with Tillerson to keep things on the right track too.

But, on Tuesday US time, President Trump made a mess of things once again. 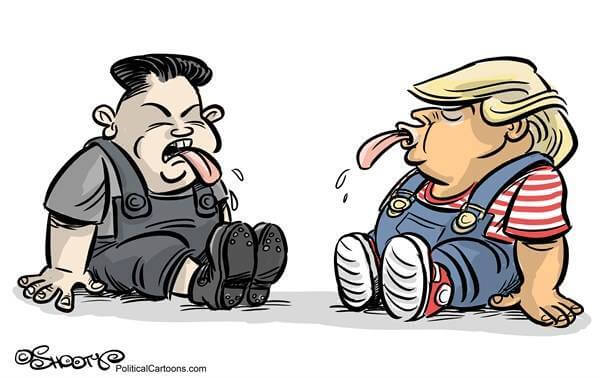 At that point, President Trump could have once again become the leader of the free world – a position he’s abdicated. An announcement that everyone was together against North Korea would have put that state in its place. It’s really only a minor player, and the trick is making sure it stays that way. Such a statement would let it know that it is not worthy of the attention of the US.

Throwing your toys out of the cot doesn’t keep working forever.

Instead, Trump elevated the status of Kim Jong-un to that of a world player, equal to the leader of the most powerful nation in the world and able to get him to interrupt his holiday.

Trump’s unconscious message during his “fire and fury” remarks was quite different to his words. The crossing of his arms and sitting back show he really doesn’t want to be there and doesn’t really know what to do. Also, though we don’t know for sure how much of his statement was in preparation for the question and how much was Trump ad-libbing, my judgment is that up until he said “fire and fury” the words were ones he had ready. After that, he went off script. The interesting thing is the first sentence is active speech. All the rest, despite its seeming aggressiveness, is passive. Trump knows, at least subconsciously, he’s not up to handling the situation.

Also, CNN has shown multiple situations in the past both verbally and via tweet where Trump has used the words “like the world has never seen” or similar. They’re part of the normal overblown rhetoric of the president. However, they’re especially unfortunate in this situation. 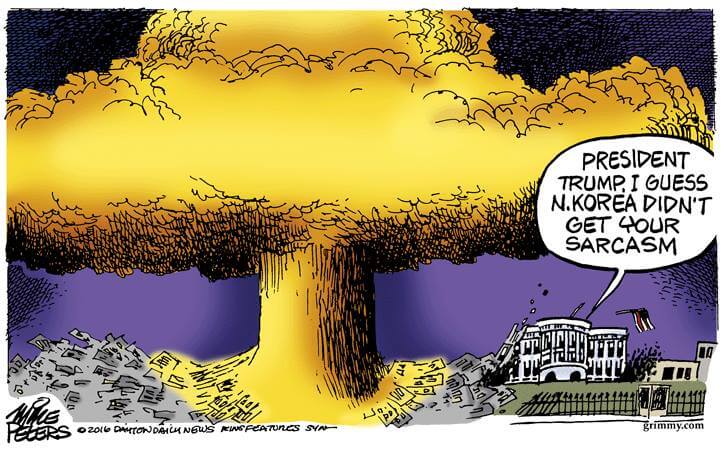 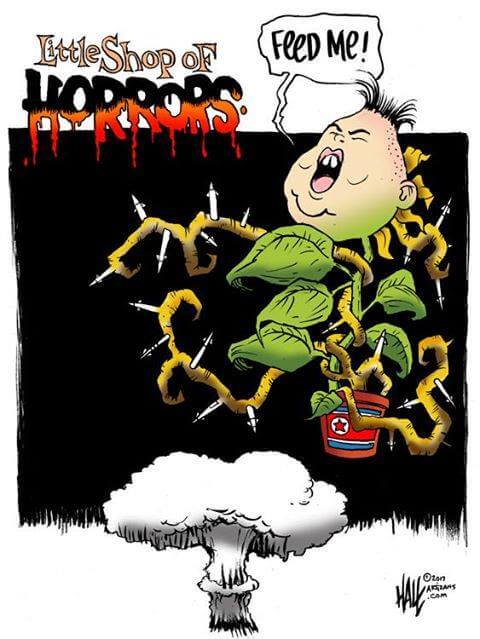 In the past the stance of every head of state, especially the US president, has been to ignore threats from North Korea. It is only bluster and to dignify it with acknowledgement is to give it an importance it doesn’t deserve. Kim Jong-un is only in his early thirties and he wants to stay in power. He doesn’t want to destroy his country and he knows that he couldn’t win a military conflict.

Trump has undone decades of policy by threatening North Korea with a military response if they even threaten the US. For someone who wasn’t going to draw any red lines, it’s a pretty big one. As anyone with any understanding of Kim Jong-un should know, he would cross that line. And he did of course – within hours he said he would attack Guam.

So what did Trump do about the crossing of his red line? Immediately, nothing. Which is actually good for the planet but not so good for his credibility.

And clean-up from Tillerson was required again.

Secretary of State Tillerson’s Clean Up

At the time of Kim’s threat, Tillerson was en-route to Guam for a re-fuelling stop. He got the following question from a reporter on the plane (Source: US State Department):

Mr. Secretary, President Trump said that North Korea’s threats against the United States, if they continue, will be met with fire and fury like the world has never seen before. Is this part of a diplomatic strategy or did you find those remarks to be unhelpful?

Well, I think the U.S. and international community with respect to North Korea has actually had a pretty good week. We had a unanimous UN Security Council resolution strengthening sanctions against North Korea with China and Russia joining us in that vote, and then at ASEAN, a lot of strong statements coming out of ASEAN, and I think also reinforced with a global community that has expressed its view that North Korea really needs to stand down this program.

And so I think in response to that, North Korea’s rhetoric has just ratcheted up louder and louder and more threatening. So I think the President – what the President is doing is sending a strong message to North Korea in language that Kim Jong-un can understand, because he doesn’t seem to understand diplomatic language. I think the President just wanted to be clear to the North Korean regime on the U.S. unquestionable ability to defend itself, will defend itself and its allies, and I think it was important that he deliver that message to avoid any miscalculation on their part.

The next day however, out comes Trump, and ruins all their hard work. Again. Answering questions from the press in an open situation for the first time in months, instead of keeping all options open like a good negotiator would, he says that the “fire and fury” comment “wasn’t tough enough”. He keeps closing down options because of his inability to shut his mouth. From CNBC: 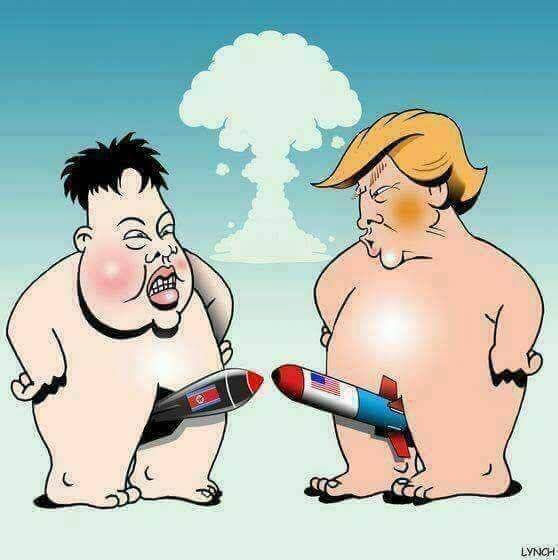 President Donald Trump on Thursday ramped up his rhetoric on North Korea again, saying his warning of bringing “fire and fury” to the isolated nation may not have gone far enough.

“If anything, maybe that statement wasn’t tough enough,” he told reporters at his New Jersey golf club.

When asked what could be tougher than “fire and fury,” the president responded: “we’ll see.” He also did not comment on whether the U.S. is considering a pre-emptive strike on North Korea.

“The people of this country should be very comfortable, and I will tell you this: If North Korea does anything in terms of even thinking about attack, of anybody that we love or we represent or our allies or us, they can be very, very nervous,” Trump said. “I’ll tell you why, and they should be very nervous. Because things will happen to them like they never thought possible.”

Delighted to once again have the attention of the US president, Kim Jong-un came out with some more of his usual overblown rhetoric. (Via CNN.)

Everyone know that the best thing is to just ignore this. Trump doesn’t seen able to. He goes on about North Korea “disrespecting” him and the US. Why does he care? Why should be care? Does he really think that North Korea failing to show him respect his something that should concern him? It’s ridiculous. 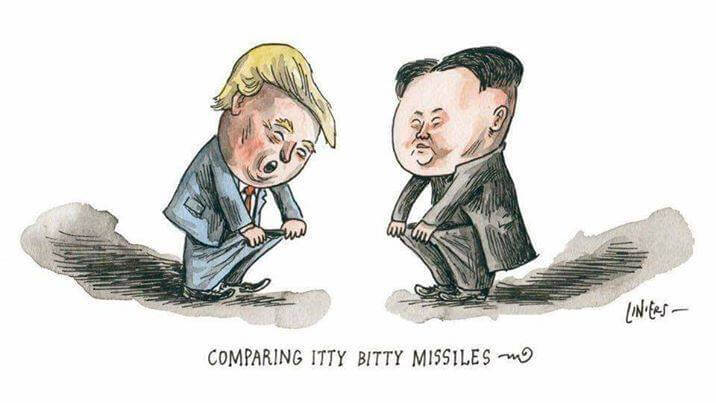 China is, as it has always been the key. President Xi will not respond to bullying or bluster from Trump or Kim. However, Trump is making Xi’s task of getting North Korea under control much more difficult. There are things Trump can do to force China into acting more quickly, and I will get to those in a future post. However, they’re things that should be done quietly and are mainly on the economic front. Tweets won’t cut it.

Fareed Zakaria writes in a post ‘Trump has been making ominous threats his whole life‘, where he points out that he rarely follows through on those threats:

“I think Americans should sleep well at night, have no concerns about this particular rhetoric of the last few days,” Tillerson said on Wednesday. This was an unusual, perhaps even unprecedented statement. The secretary of state seems to have been telling Americans — and the world — to ignore the rhetoric, not of the North Korean dictator, but of his own boss, the president of the United States. It is probably what Trump’s associates have done for him all his life. They know that the guiding mantra for him has been not the art of the deal, but the art of the bluff.

The Charlottesville incident may have had a silver lining in that it took North Korea out of the headlines for a day or two. It gives a chance for a reset. The US Joint Chiefs of Staff had a meeting with their counterparts in South Korea today, and later the Chairman of the Joint Chiefs, General Dempsey, met with the South Korean president, Park Geun-hye. There will be more meetings in coming days.

Also, I live in hope that the racist comments of National Security Advisor Sebastian Gorka in the last couple of days will prompt his dismissal. Then he will no longer be around to stir up the president re North Korea. (His interview on BBC radio two days ago was “terrifying”. See here.)

At the same time, Tillerson, Mattis, and Haley can work on a media strategy with the president for handling the situation. Currently, the White House doesn’t have a person like Ben Rhodes in the Obama administration who always made sure everyone stayed on message at times like this. Somehow, wiser heads need to stop the president reacting to Kim Jong-un the way he has so far. 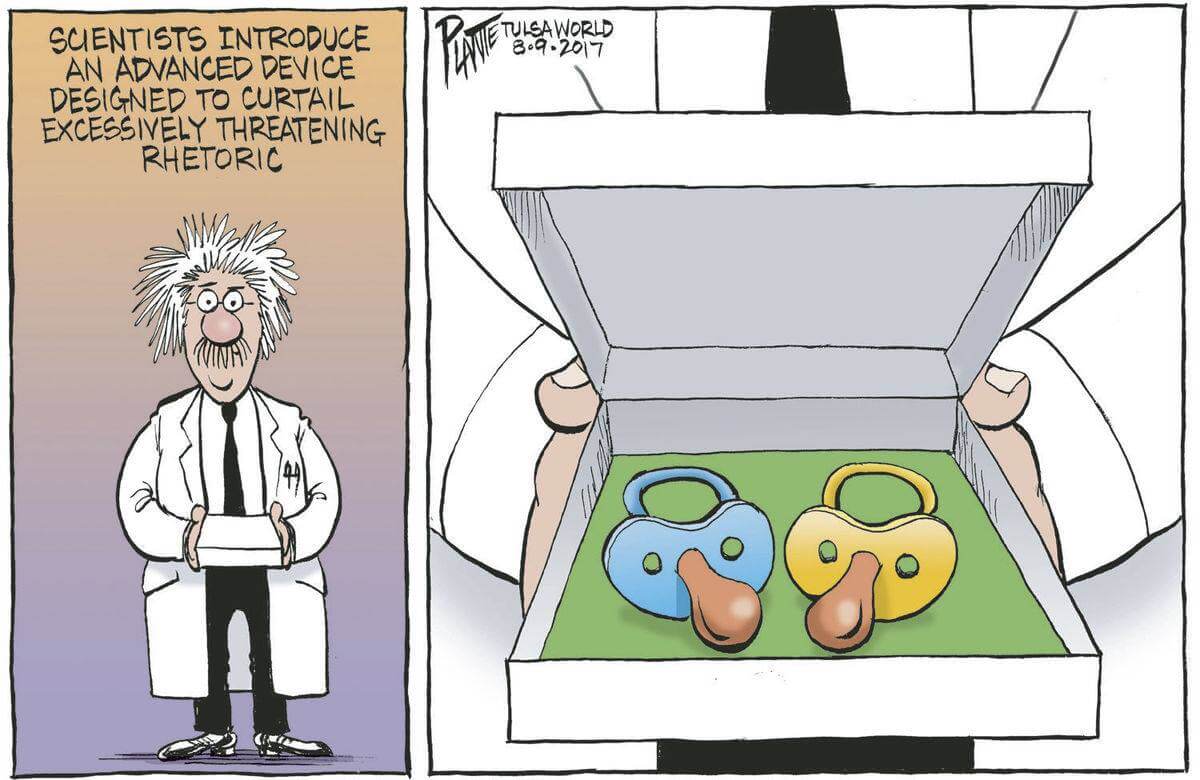