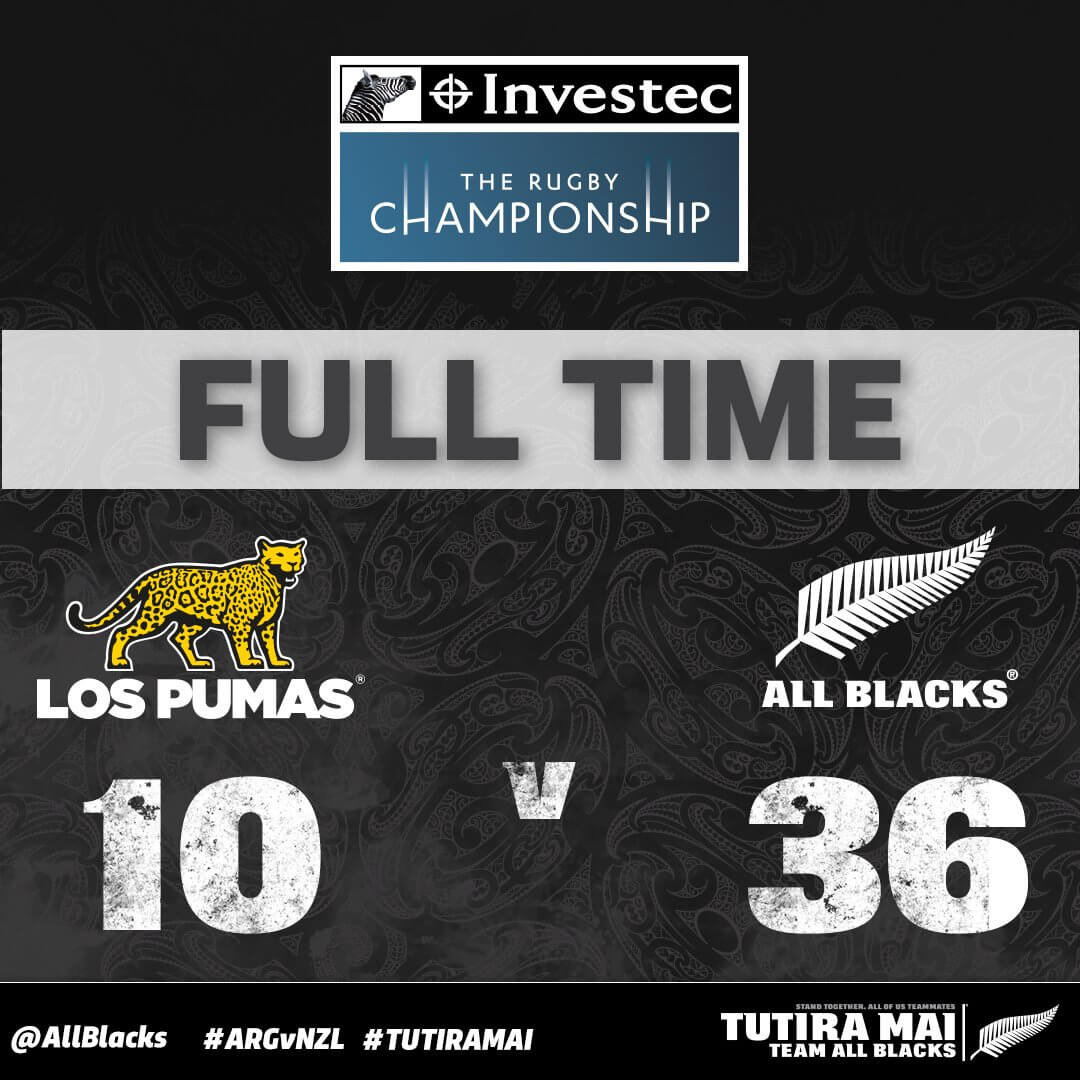 This will be my last Sunday post of tweets for a while. I’m finding it very difficult to keep up with this every day, so I’m going to take 2-3 days off each week. I’m not quite sure which days I’ll do yet, but, of course, I’ll let you know.

Also, on those few days where I do a “proper” post, I won’t be doing a tweets post too.

The good news is the All Black have just won another match! We played the Pumas (Argentina) at Estadio José Amalfitani in Buenos Aires and you can see the score!

It was a bit of a sloppy performance by the All Blacks, though several players had excellent individual games. Davil Havili got a try on his debut, which is great for him. There was some talk that the All Blacks were disrespecting the Pumas by the quality of the forwards they sent. However, the forwards were dominant over the Pumas forwards despite their skill.

A bad tackle saw our captain get a yellow card, which is not good. He was lucky not to get a red card. There was no malice in the tackle which is perhaps what made the difference. A Puma also got a yellow card earlier in the game.

This match is part of a four-way tournament that also includes Australia (Wallabies) and South Africa (Springboks). Before the game started, NZ was already the winner of the tournament as we have won all our games so far and have a lead that can’t be beaten.

We still have another match next week though, and it will be a matter of pride to win that. It’s against South Africa, in South Africa. They will want to make up for their big loss the last time we met, so I expect some fireworks. (Come to think of it, that game will be on a Sunday NZ time, so I might have to do another Sunday tweets post!)

These Pumas fans enjoyed the try they scored! (I wonder if that Massachusetts librarian thinks this hat is racist?)

TRY! The crowd erupts in Buenos Aires! The TMO confirms that Juan Manuel Leguizamon has got the ball down!#ARGvNZL pic.twitter.com/rwOjszRy9A

Can Kieran Read add to his two tries against Argentina? The #AllBlacks remain 29-3 up after 45 minutes.#ARGvNZL pic.twitter.com/DAhX9QeFkK

There weren’t many NZ fans in the crowd, but the camera did find this one:

TRY! Damian McKenzie takes a quick tap and catches the Pumas defence napping! Conversion is good to make it 15-3 to the #AllBlacks#ARGvNZL pic.twitter.com/k5pYizjTA8

The All Blacks got into the local culture while they were in Argentina. Here are three of them trying out their language skills.

Hola como estas! Who is keen on a Spanish lesson? Let the #AllBlacks show you what they have learnt during their week in Argentina#ARGvNZL pic.twitter.com/RJkN5lh0vi

Why is anyone still surprised at the tone-deaf reactions of the US president?

President Trump is more worried about the debt in Puerto Rico than the destruction. pic.twitter.com/gxxQ6GJUam

This week a Belgian committee ruled against the ritual circumcision of infant boys – comment from @SecularMedForum https://t.co/ssOCtcSqKH

I have very little time for NZ political party NZ First, but they do have one policy I support – the repeal of our blasphemy law.

On International #BlasphemyDay, here is the Hansard of NZ First’s (former?) MP Denis O’Rourke from failed 2017 attempt to repeal our law pic.twitter.com/khHWIFR2C3

I think I said before I want stained glass in my dream house. This example is not what I want, but it shows why I want it.

The Earliest Known Photograph of White House Was Taken by an Immigrant in 1846 https://t.co/4RlB85hYmy

It’s cool being a continent!

Now there’s an answer to the algebra question I never thought of!

Science is so cool!!!

Computers are learning to read your body language pic.twitter.com/JqCCvt8GgQ

One of Guatemala’s amazing Mayan temples.

There are lovely places like this all over the Pacific. Many even have hotels where you can get down into the ocean through the floor of your room.

Dr Andrew Digby was a great find on Twitter! Here are some more Kakapo chick pics and videos from him. Fantastic! (The first four tweets are the chicks from yesterday’s video in the Bird Tweets section.)

Next chance to see #kakapo chicks like this? Likely 2019 – that’s next predicted breeding on main islands. #conservation #endangeredspecies pic.twitter.com/aC0F1DZIiM

Welcome, new followers this week, to the weird & wonderful world of #kakapo. Come for the chick videos; stay for the #conservation #science! pic.twitter.com/XcVapEBNKK

The #kakapo chicks are naturally very curious, and will soon check out anything new in their pen. #conservation #parrots #endangeredspecies pic.twitter.com/Vx5QEyEhma

#kakapo chick Suzanne3 looking a bit sheepish after a tumble. These hand-reared chicks have to learn lots – even how to shelter from rain. pic.twitter.com/R056zsswvL

Climbing and balance don’t come that easily to young #kakapo. Here’s Suzanne3 before and after a fall. Learning these skills is vital. pic.twitter.com/BE7cgj86T6

#kakapo are expert climbers, and chicks need to learn. We give hand-reared chicks branches for climbing frames. #conservation #parrots pic.twitter.com/8O5gHYDhDV

Not what you want to find when you go to the bathroom! Beats finding a spider in the bath!

Where are its eyes?

Let me get my… oh. I guess I’ll wear something else then… pic.twitter.com/GfH07Alquh

This dog would make a good rugby player with that slide-stop. All he needs is a ball and he could be scoring a try!

Look at that moustache! (Yes, that’s how we spell it in proper English!)

My kitten Mog feeling very proud of herself after climbing my curtain pic.twitter.com/iK88QK3lhE

This is in the Cat Tweets section because the cat is clearly in charge! The poor old dog looks rather resigned to his role as a cat bed. Like humans, he’s knows that getting up is not allowed in these situations!

They even look alike.. pic.twitter.com/IPGRM3sNYm