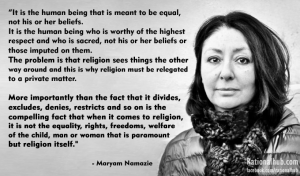 Iranian-born human rights activist and broadcaster Maryam Namazie left Iran with her family in 1979. She is a spokesperson for women’s group ‘Iran Solidarity – One Law for All’ and The Council of Ex-Muslims in Britain.

For my Worry of the Week, I’d like to draw your attention to a film that was brought to my attention by Dermot C., a commenter on the Why Evolution is True website. It’s called Women on the Front Line and was produced last year by Sheema Kalbasi, directed by Hossein Fazeli, and written by the two together. It’s about the women’s movement in Iran and how it’s evolved since the 1979 revolution.

It features a woman I admire greatly, Ayaan Hirsi Ali, along with historian Michael Ledeen and political philisopher Noam Chomsky. The film ends positively, with the participants hopeful of change in Iran, but nevertheless it is a worry that so many women around the world don’t know what it is to live a free life, and never will.

Imam and theologian Khaleel Mohemmed says in the film:

The Qur’an itself, as a document, was set in a particular time in history, and it was supposed to fix that time. Here is how it works: scripture cannot transcend time. Every scripture comes in a context – a temporal context. Scripture therefore, in terms of its function, has to be applied through the centuries. A scripture comes alive through interpretation, otherwise it is a dead book, and if you try to apply it … verbatim, it loses. It becomes rather than a symbol of enlightenment, it becomes a symbol of darkness and oppression.

If all religious leaders took that attitude to their scriptures, the world would be a better place. It also makes me think of people, like judge Anthony Scalia of the US Supreme Court, who are Originalists when it comes to the US Constitution. This in their minds supports their opinions opposing same-sex marriage and supporting the bizarre gun laws in that country.

Women on the Front Line is almost an hour long, but, as Dermot C said when he told me about it, it’s well worth the effort.