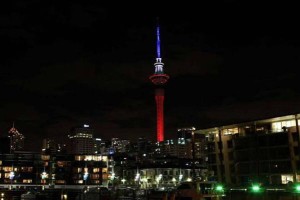 Sky Tower in Auckland, NZ lit up in the colours of the tri-coleur last night in solidarity with France. (Source: www.stuff.co.nz)

What else? France has experienced their 9/11. The Friday 13th myth originated in France, and DAESH has made it a reality.

I was happily supermarket shopping on a beautiful sunny morning when the first of seven suicide bombers detonated his vest yesterday morning New Zealand time. I didn’t know what had happened until several hours later when I sat down to eat my lunch. I turned on the TV expecting to enjoy a current affairs show as I ate. There was no enjoyment, but I was riveted nevertheless and spent the next seven hours glued to the coverage.

While it was clearly terrorism, no group had claimed responsibility at that time, so I was in the dark as to the motive for the attacks. It was reported one survivor from the Bataclan concert hall had said a terrorist announced, “This is for Syria.” Another person reported a suicide bomber had said, “Allah u Akbar” before detonating his vest. Neither of these statements was confirmed by authorities then, so I didn’t know what to think. In the absence of official information, people just make stuff up, and it’s hard to know what’s real.

There were reports that “The Jungle” (the camp where refugees and immigrants stay in Calais while trying to get across the channel to England) had been burned in retaliation, but that turned out to be a hoax. Photos that were produced were exactly the same as those taken in a riot months ago. I got caught out myself. I tweeted a comment someone sent me that Donald Trump had supposedly made, referring to France’s tough gun control laws. I didn’t check it out properly – he’d made the comment but it was in response to the Charlie Hebdo massacre, not yesterday’s horror. It was a really bad mistake too because the date was right there, and I just didn’t see it. Anyway, my wrong tweet was even reported in Mediate. They failed to note though that within a few minutes I tweeted that I’d mucked it up, and tweeted that confession again several times. I guess that part of the story didn’t fit their agenda. 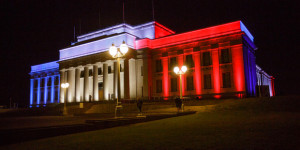 We know now that DAESH has claimed responsibility for the six separate incidents on Friday night French time. To the long lost of atrocities they have committed we can add:

I don’t know if the confirmed deaths include the eight terrorists that lost their lives, seven of them via suicide. Because of the brainwashing of fundamentalist Islam, they were surely convinced that their heinous actions would take them to Paradise and their victims to hell. If they accidentally killed an innocent, no matter – that person would go to Paradise too and be better off. The lives of these men were destroyed by whoever instilled this extreme version of Islam in them. They are victims too.

Kim Dotcom proves once again he’s an a-hole. Any opportunity to get some attention, and he’s in. Surveillance MUST be done legally, and probably France wan’t doing enough.

There are still several perpetrators of these attacks out there, currently being sought by security services. One was arrested in Belgium after he crossed the border from France. I admit I’m worried about the ability of the French to catch them all. Paris was a city at the highest level of security alert, a week out from a major international conference, and still an extremely sophisticated and well coordinated series of attacks was able to be carried out. It seems French security was well and truly outsmarted.

President of France François Hollande has declared a state of emergency along with three days of national mourning. He has declared this an act of war and says France’s retribution will be “merciless.” The police and military are a presence on the streets of Paris, but the TVNZ Europe correspondent Emma Keeling says it’s nowhere near as strong as she thought it would be. Although things such as public monuments are closed, she says Parisians seem to be largely going about their business as usual. Hollande also said the borders were closed, but Keeling was able to enter the country on the Eurostar from London with no difficulty, and all airlines continue to operate.

François Hollande was attending the soccer friendly between France and Germany at the Stade de France, and would have heard the first two explosions of suicide bombers outside the stadium twenty minutes into the game (9.20 pm). One of the suicide bombers was found with a Syrian passport and Greece has since confirmed that he came through their borders as a refugee. Marine le Pen, leader of the far-right National Front, the third largest political party in France, has made the predictable response. According to Yahoo News:

“Islamist fundamentalism must be annihilated, France must ban Islamist organizations, close radical mosques and expel foreigners who preach hatred in our country as well as illegal migrants who have nothing to do here,” she said.

Unfortunately, there are going to be many who will focus on the small number of terrorists who have managed to get through and they will ignore the millions who are suffering. When are people going to work out that those running from Syria are trying to escape both their government and the terrorist organizations like DAESH that are operating there with impunity? Bashar al-Assad, President of Syria, has made a statement blaming France’s policies for what happened. Here he’s on the same side as the perpetrators in blaming the victims.

In the last 24 hours several people on Twitter have told me I need a gun to protect myself. (They weren’t making direct threats – they just erroneously believe a gun would make me safer.) I’ve also been sent links to articles that say things like the situation is going to get worse because Muslims in France are more devout than Catholics. (I kid you not.)

The French values of liberté, égalité, and fraternité (liberty, equality, fraternity) are the sort of values that we need to continue to promote. We cannot allow fear to rule our lives. However that is, of course, easier for me to say from a small town in a country that is way down on DAESH’s list of targets. 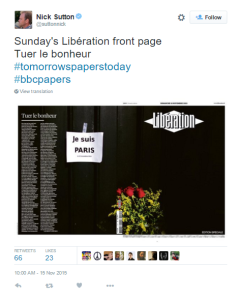 Libération is a major daily newspaper in Paris, better known as le Libé. Tuer le Bonheur is the title of Sunday’s editorial. It means Killing the Happiness.