Worry of the Week – 13 September: Al-Qaeda 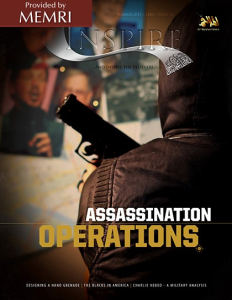 My Winner of the Week this week was The Free World, an entity that is growing every day as freedom and democracy continue to spread. Long-term, as I said, I have no doubt that it is the values of secularism and humanism that will take hold. The behaviour of many though makes me realize it’s not going to happen in my lifetime. My Worry of the Week is Al-Qaeda, specifically AQAP (Al-Qaeda in the Arabian Peninsula) who this week published their latest edition of their on-line magazine, Inspire. Most worryingly, it seems Al-Qaeda is taking note of the success of DAESH – in the magazine is a call for the lone-wolf assassination of ten men associated with the business and finance world. These include Microsoft founder Bill Gates, Warren Buffet, Michael Bloomberg, Ben Bernake (former Federal Reserve chair), and the Koch brothers.

According to The Blaze, Inspire says these men could secure their safety and wealth by:

1. Drawing all their money from American banks, and moving them to banks that are not related to the American stock market.

2. Investing their wealth outside American soil.

3. Declaring via media that the are far from American policies toward Muslim and America’s support for Israel.

The magazine, issue 14, was released on Wednesday (9 September) and in it the editor, Yahya Ibrahim, after praising the actions of the brothers who committed the Charlie Hebdo massacre, wrote:

“… in the coming days we are waiting for the anniversary of … the blessed 9/11 operation. … We at Inspire, and in the cause of the events of 9/11, encourage the Muslims in the West to join the Lone Jihad caravan. … in this issue, we have presented for the Lone Mujahid ways and methods to enable him to give victory to the religion and the prophet.”

This is what Inspire published in issue 7, on the tenth anniversary of 9/11 (Shaykh Usama is Osama bin Laden): 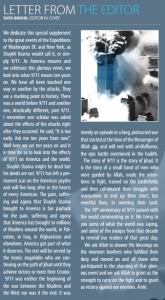 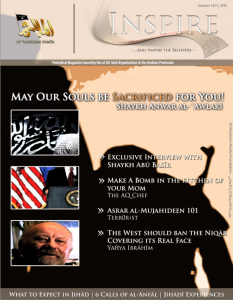 The cover of the first issue of ‘Inspire.’ (Source: Jihadology.com)

The magazine was first issued in the (northern) summer of 2010, and its appearance is extremely professional. (I downloaded the first twelve issues today – I wonder if I’m being checked out to see if I need to go on a watch list? Don’t worry guys, you didn’t miss anything. There really is nothing to find.)

It looks just like any other magazine with an editorial, questions from readers about jihad that are answered by imams, articles, and interviews. Instead of recipes though, they have instructions for making bombs. You can see on the cover of the first issue (left) that it includes something called, “Make a Bomb in the Kitchen of your Mom.” That heading appears on page 33. Before they get down to the instructions, there is a page of Qur’anic justification for the murder of civilians. Then comes the seven pages of step by step instructions, with pictures. I only read the first couple of pages, but I could follow it easily. I assume if I kept reading and followed the instructions, I could make a pipe bomb

Each issue has something of the kind. From issue 7 I now have a detailed pdf, step-by-step, six pages long, on how to make a car bomb. It tells me, “If you are a martyrdom bomber, and you want to detonate the car bomb directly, use a manual switch that is operated by hand …” The article ends on a cheery note with these words in a blood red banner: “That’s all there is to it.”

That first issue also includes an article, supposedly by Osama bin Laden, warning of the dangers of climate change. It’s not inaccurate, but the rhetoric gets a bit carried away:

Many senior capitalists are characterized by wickedness and hardheartedness, and thus they don’t care about the human disasters caused by their economic activities. Words, conferences and demonstrations are of no use with such people. 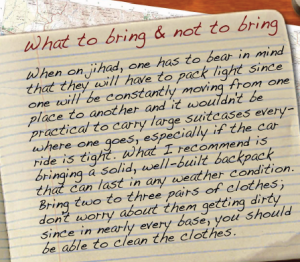 There’s a section in each magazine too about what to expect from jihad. They talk about some of the psychological problems they may face if they are unable to speak the local language, for example, because they are thus unable to socialize with their fellow mujaheddin. There’s also advice to bring a friend when you go to fight. (Two New Zealanders who were killed in Yemen fighting for AQAP had obviously followed this advice.) They tell you about the local customs and to make sure you learn them, and even what to pack. It’s all very matter-of-fact, as if they’re going on a tramping holiday and stopping at DOC huts along the way. Here’s some more of the advice: 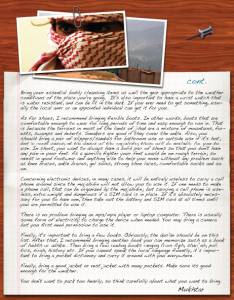 The article that follows the one above is called ‘The Jihadi Experiences: The Schools of Jihad,’ and is a fascinating glimpse into the minds of the terrorists. I haven’t read much of the magazines yet – they’re 72 pages each. Some of what they write is, as you would expect, interesting, and I’ve no doubt accurate too. It’s what they plan to do about it that’s horrific, and a verse or verses from the Qur’an is used to justify every one of those actions.

There’s plenty of evidence that even though these men are intelligent and organized, their religiosity has led them to make some erroneous judgments. For example in this clip from page 9 of issue 8 (Summer 2011): 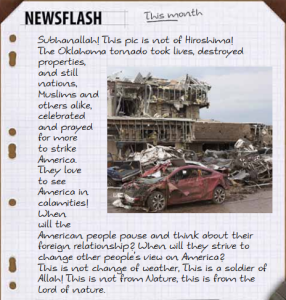 It seems they consider that any natural disasters that occur on US soil, or any other of what they refer to in Inspire as “crusader nations,” are the vengeance of Allah.

The slogan of AQAP and Inspire is “Here we start, and in Jerusalem we meet.” Just today the BBC reports there was a small battle at Al-Aqsa mosque complex in Jerusalem between Israeli police and Palestinian youths. Fundamentalist Christian and Jewish sects believe in the End Times and a battle at Har-Megiddo, or Armageddon, which is in Palestine. Muslims have a different End Times myth. From IslamToday.net:

Muslims believe that there will be a great battle in the region of Greater Syria (Bilâd al-Shâm) – the countries of Syria, Lebanon, Palestine and Jordan. It will be between the Muslims and the “Romans”. The Muslims will emerge triumphant after a very harsh battle.

This final battle will be in Jerusalem, and this is the meaning of the AQAP/Inspire slogan. (Most Muslims do not consider this is an event to look forward to.)

Al Qaeda leader Ayman al-Zawahri, who has led the organization since the death of bin Laden, also released a recording on Wednesday. Although it’s possible the tape was made as long as eight months ago, his words confirmed that the primary goals of Al Qaeda are still to destroy the USA, establish Sharia throughout the Middle East, and to eliminate Shi’a Islam. In it he said he didn’t consider the DAESH caliphate valid, but he was prepared to work with them against their common enemies.

So I’m worried. Too many people (and even one is too many) have something missing from their lives that they feel can be filled by aligning themselves with groups like Al-Qaeda. It’s likely they took many different paths to get there, and sometimes it will be hard to see what that path was, but it’s the responsibility of all of society to do its best to make sure that doesn’t happen. There are small things everyone can do to make this world a better place to be, and if we all make an effort, terrorists and terrorism will die a natural death.

And yes, I know I’m being naïve and overly optimistic, but that’s better than turning into a negative and grumpy old bitch. 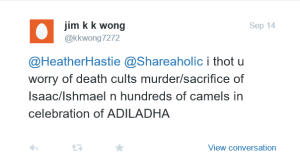 I don’t suppose anyone knows what it’s supposed to mean?