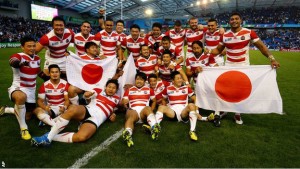 Japan celebrating after their win against South Africa 19 September 2015 (Source: AP via bbc.co.uk)

The Japanese rugby team have been stunning everyone with their impressive performances at the 2015 Rugby World Cup in the United Kingdom.

As a Kiwi, I should be writing about our team, the All Blacks. They’ve won all three of their matches so far and are still the favourites to win the tournament. In fact, I still think they will win overall and that’s not just because I’m a one-eyed New Zealander. However, their performances so far, despite some individuals doing well, have been decidedly uninspiring.

The Brave Blossoms on the other hand, have been fantastic. They wowed everybody two weeks ago when they beat the Springboks (South Africa) 34-32 despite being 40-1 outsiders to win the match. The coach, Australian Eddie Jones, had tears running down his cheeks as New Zealand-born Karne Hesketh’s try in the 84th minute secured the game for Japan. It was a strong team performance, with the Japanese never giving up, and their determination was rewarded.

Japan’s supporters in the crowd were both stunned and excited. It was a special moment for my family as well – I have a Japanese sister-in-law and I’m the aunt to three wonderful half-Japanese/half-Kiwi kids. Winter and the rugby season have just finished here in the southern hemisphere and one of them has just won the end of season award for most improved player for his rugby team. I’m very proud of him! So naturally, as a family we support Japan along with New Zealand when it comes to rugby. 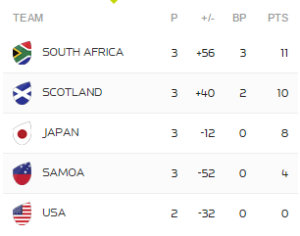 Pool B Results at 4 October 2015. Japan have yet to play the USA. (Source: www.rugbyworldcup.com)

Today the news for Japanese rugby got even better. In a dominant performance, proving they’re no one-hit wonder, the Brave Blossoms beat Manu Samoa overnight 26-5. Samoa are no easy-beats – they’re are strong team and Japan’s victory over them is impressive.

In between, the South Africa and Samoa matches, Japan lost to Scotland 45-10.

Their highest points scorer is fullback Ayumu Goromaru, who’s scored 45 (ten penalties and five conversions) of Japan’s 70 points. The team has scored six tries and has an impressive discipline record too – they’ve only had one yellow card and no red cards.

The last time Japan won a match at the Rugby World Cup was 1991. (Three of their current players weren’t even born then!) But they have been working hard to improve themselves over the years, and now they’re impressing everybody. Their next match is against the USA on 11 October, and it’s not just for sentimental and family reasons I’m picking Japan to win. They look to be the better team and I can’t wait to see the game. There’s even an outside chance Japan even could make it so the quarter-finals. That would be so cool!