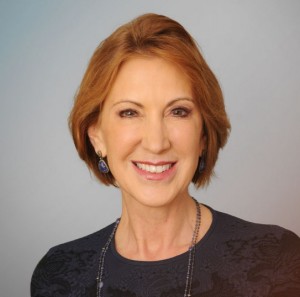 So far we’ve had two GOP primary debates, the first hosted by Fox News and the second by CNN. The outstanding performer in both was Carly Fiorina. Whatever you think of her positions on the issues, and I disagree with rather a lot of them, she has been clear, eloquent, displayed a deep knowledge of the issues, and has yet to make a single misstep. Her intelligence and ability to think on her feet are obvious.

There are so many candidates for Republican nominee, that both debates so far have had to be split into two. Before the first debate on 6 August, Fiorina was in 14th place out of 17 and thus couldn’t even make it into the top ten and into the main debate. 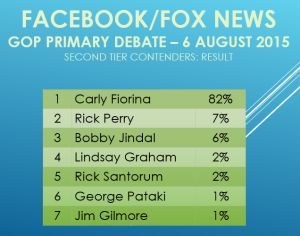 However, almost every commentator had her winning amongst the seven candidates on the under card easily. A Facebook/Fox News poll saw her 75 points ahead of her nearest rival Rick Perry, who has since dropped out altogether.

Her success in the debate was the catalyst for more coverage over the following weeks, and she took full advantage of it. By the time of the second debate on 17 September she’d risen seven places in the polls to seventh. Unlike any of the other second tier candidates, she was now in the top ten and on the main debate stage.

Some predicted that in competing with higher ranked candidates she wouldn’t have the same advantages as she had in the other debate. This both underestimated her and poorly judged the state of the Republican race. For a start, there had been no indication so far she would be fazed in any debate. Secondly, the quality of the Republican candidates has little relation to their place in the polls. The worst candidate in the field, Ben Carson (more about him later), has been in the top five since the beginning, and then there’s Donald Trump. Donald Trump has been winning pretty much since he announced his candidacy and, for a long time was increasing his support. The rise slowed after the first debate, and has now, in my opinion, stopped. 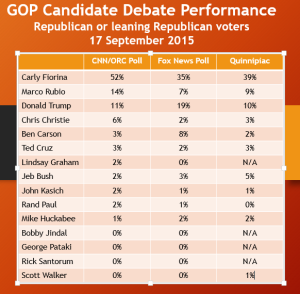 And a big reason for the people finally noticing the emperor has no clothes is Fiorina. Her performance in the second debate was as good as the first. There were many popular polls after the debate that had Trump winning by a wide margin and Fiorina second, but they were not properly conducted polls, and their results can safely be discounted. In such polls, most people vote for who they already support, and repeat voting is common. There is never any way to know whether the voters in such polls are representative of the wider electorate. In his usual petty way, Trump is so annoyed with Fox News for pointing this out that he is refusing to appear on Fox News for the “foreseeable future” because they have treated him “very unfairly.”

Valid polls ask respondents to assess who did the best regardless of who they support, and people only respond once, of course. They also cover a representative selection of the population. So far, there have been at least three valid polls – one by Fox News, one by CNN/ORC, and the third by Quinnipiac University, the results of which I’ve summarized above. All have Fiorina winning by a wide margin. (The Quinnipiac poll didn’t include those who appeared in the second debate, hence the “N/A” for four candidates.)

Before the first debate, Fiorina was virtually unknown except in California where she had an unsuccessful try for a senate seat. In 2010 she tried to unseat the incumbent Barbara Boxer (Democrat), where she lost by a wide margin – 42.2% to Boxer’s 52.2%. The factors that were brought up by the Boxer campaign in opposition to Fiorina were a decision to lay off 30,000 workers, that she shipped jobs overseas, that she owned two yachts, and that while she was CEO of Hewlett Packard equipment was sold to Iran, some of which went to the military. These things are starting to be mentioned again now that she is becoming better known. Her answers have mostly been accepted so far by the GOP electorate, but they will likely damage her in a general election.

After the first debate, which had the biggest audience ever for a Republican debate, a CNN/ORC poll showed that still 43% of USians had never heard of her. Following the second debate that figure has reduced to 30%. It seems that as people are getting to know her, her popularity is increasing. Her favourability ratings definitely are. A CNN/ORC poll conducted 13-16 August gave her a favourability rating amongst all USians of 27%. Their latest poll, conducted 17-19 September, shows that has increased to 34%. This is second equal with Jeb Bush and only Ben Carson is higher at 40%. Amongst registered Republicans her favourability was 54%, third behind Ben Carson (65%) and Marco Rubio (57%).

The result amongst all USians is significant. Only she and Ben Carson are popular with both Republicans in particular and all USians in general. I really can’t see Ben Carson’s popularity lasting once the electorate at large become aware of some of his extreme religious views. Carson thinks being gay is a choice, prison turns you gay, Obamacare is “the worst thing since slavery,” evolution is a lie perpetrated by The Devil, and the Biblical End Times are near. Here is one of the many examples of Carson’s warped, conspiracy-theory-ridden opinions:

Once the wider electorate becomes aware of such views, Carson surely won’t be able to retain his popularity. People will realize that being soft spoken doesn’t mean you’re a good person. There’s a lot of really nasty stuff behind that well-cultivated bedside manner. This will help to elevate Fiorina.

Most Republicans are looking for an outsider. Most of the candidates are trying to portray themselves as that person, but Republicans aren’t buying it. There are only three who fit their criteria: Trump, Carson and Fiorina. In the Fox poll referenced above, 49% of voters answered agreed with the statement that Trump “is too mean and blunt to be president.” Carson has multiple extremist views that are at odds with the majority. That leaves Fiorina.

At this stage, I’m still picking her as vice-presidential candidate rather than president, but it’s certainly not impossible that the first woman president will be a Republican rather than a Democrat.