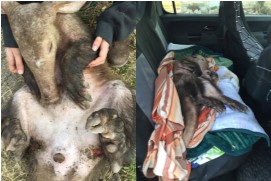 Yesterday I got this great video from Amy Carparelli (@AmyAmylou1993) on Twitter. It’s about the Rare and Endangered Species Trust (REST) in Namibia and the work they’re doing with the pangolin or scaly anteater.

If you check out their Facebook page, you’ll see some of the other excellent work they’re doing as well, most recently with Beatrice the aardvark, who has injuries consistent with being trapped in a snare.

Pangolin meat is considered a delicacy, and the scales are used in some Asian medicines. They are protected by law, but because of the belief in their medicinal value, they continue to be hunted. According to Nature:

The animal itself is eaten, but a greater danger arises from the belief that the scales have medicinal value. Fresh scales are never used, but dried scales are roasted, ashed, cooked in oil, butter, vinegar, boy’s urine, or roasted with earth or oyster-shells, to cure a variety of ills. Amongst these are excessive nervousness and hysterical crying in children, women possessed by devils and ogres, malarial fever and deafness.

That article in Nature was from 1938, but it looks like things haven’t changed much. The REST website has this to say:

Trade in pangolin scales continues to be a huge problem in many Asian countries. Ships have been found recently with up to 10,000 tons of scales from different species in Africa and additional tons of whole carcasses.

Maria Diekmann is one person who is getting it right when it comes to the pangolin, and this video about her work is inspiring.

These animals are basically going extinct because of the increasing population overall and the increased size of the middle class in Asia creating an enormous demand for them in bogus medical treatments. It’s a very sad story, but thanks to Maria Diekmann, there is one bright spark.