The US EPA Reduces Safety Rules (plus Tweets) 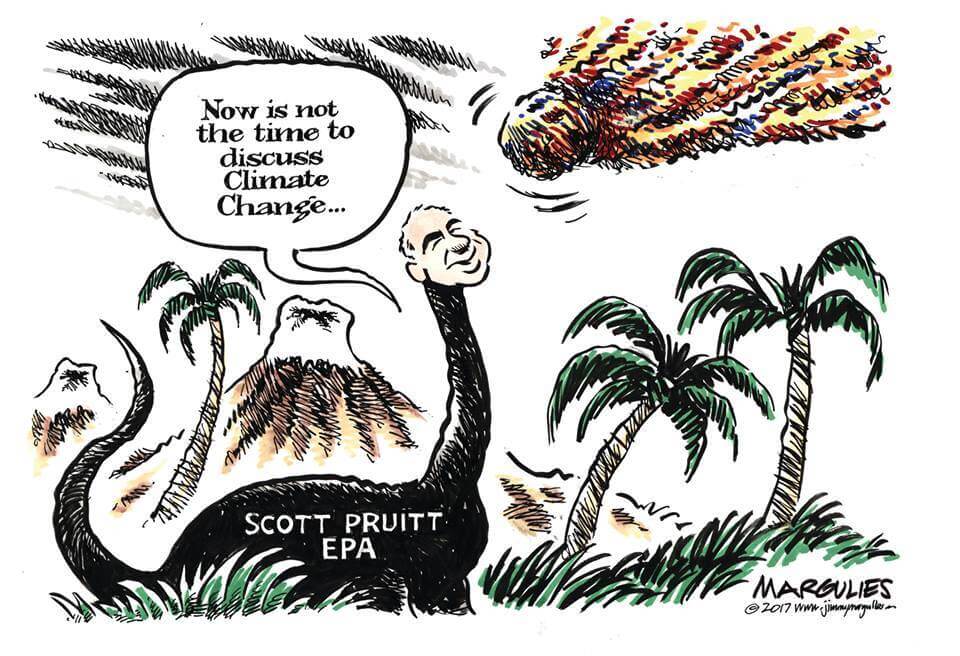 There is so much that is execrable to comment on in the Trump Administration, too much just goes under the radar. Covering Trump’s tweets every day is a full time job in itself. While he accuses others of fake news, his own outright lies are legion. The Washington Post documents over 2,000 lies or misleading statements in his first 355 days in office. And he spent 91 of those days playing golf.

However, Trump’s antics are distracting much of the media and therefore his country from a lot of the bad stuff other Republicans are doing. One of the worst is Scott Pruitt, head of the Environmental Protection Agency (EPA).

Before he was head of the EPA, Pruitt was attorney general of Oklahoma. In that role he appeared to have ties with both the fossil fuel industry and conservative groups that supported it beyond what was normal. The Washington Post reports that liberal watchdog group CMD asked for Pruitt’s official emails released.

After two years of Pruitt refusing the request, a judge ordered him to comply. However, it was not until just after his confirmation as EPA head that he did so. It was soon clear why. The emails showed Pruitt’s relationship with the fossil fuel industry and their conservative supporters was dishonourable at the very least. I’m no lawyer, but if what he did is legal, it shouldn’t be. Either way, it should have meant he was ineligible for his new role.

As an example, attorneys at Devon Energy drafted a letter to the then EPA Administrator for Pruitt to sign that supported what they wanted. The Washington Post reports:

In another email chain on March 21, 2013, Whitsitt [of Devon Energy] wrote to Pruitt’s office offering a draft of a letter that state attorneys general might sign and send to the then-acting EPA administrator regarding limits on methane emissions. Devon, which has substantial shale gas and shale oil drilling operations, would have been affected by the rule.

Since becoming head of the EPA, Pruitt has continued in his actions to support the fossil fuel industry and the conservative groups that advocate on its behalf. The environment, on the other hand, is losing more and more of its protections. There have been several ways in which Pruitt has proven to be a joke when it comes protecting the environment. He announced another of his so-called “reforms” last week. From Mic:

The Environmental Protection Agency is changing the way it evaluates new chemicals for environmental and health hazards, reducing the burden on chemical companies to make their products safer.

Chemicals used in everything from cleaning products to consumer goods like children’s toys are expected to face fewer barriers to being approved for market, causing concern among safety activists and environmentalists alike.

That means if a product has potentially dangerous effects to a person’s health or to the environment, but those effects only happen when people use the products in ways they weren’t designed for, companies will face fewer legal liabilities.

The media is doing a great job holding Trump to account, but while he distracts them, there’s a lot more going on. He insists “no-one loves the environment more than me.” But pulling out of the Paris Climate Accord and the multiple changes made by the EPA tell a different story. The Trump presidency is a danger to the improving record of the US on reducing their greenhouse gas emissions.

This section is at the top today, because another of Trump’s appointees is doing an equally terrible job. This time it’s Ryan Zinke, Secretary of the Interior. The article in the link about a mass resignation outlines the other disgraceful things he’s done as Secretary of the Interior. While the rest of the world is increasing the amount of land brought under government protection, the US is increasing the rape of both the land and the sea bed.
(Via Ann German.)

America First, and the failure to include the Dreamers in legislation.

He killed that deal in a racist rant about “shithole” countries.

Trump’s racism is what shut down our government.

“America First” isn’t just a dogwhistle, it’s a siren call to racists and always has been.

What is is about power that turns men into hypocrites?

Well that’s a turnaround for the books!

Michael Wolff’s entree into the WH began with Trump himself, who phoned the author in February to compliment him for blasting the media during a CNN appearance.

Aides Kellyanne Conway and Hope Hicks met with Wolff the next day.https://t.co/heeGYwXsB0

Yet another shoe dropping.
(Via Ann German.)

The FBI is investigating whether Alexander Torshin, a top Russian banker (known as the “Russian godfather”), illegally funneled money to the NRA to help Trump win.

There’s also a thread of nine tweets following the one above providing more information, including these three …

According to intel assessments, Torshin is part of a years-long “aggressive Kremlin effort to forge alliances” w/top GOP figures, including those close to the WH. The NRA is a major conduit of influence here… and possibly also a cash conduit.

Also in Nov., Don Jr admitted that he met with Torshin at a private dinner at the NRA’s 2016 convention — just as Torshin requested in the (undisclosed) emails to Kushner (in which he said he wanted to meet with a high-level Trump campaign official).

Torshin and Trump have reportedly known each other since at least 2012. According to Bloomberg, the two “had a jovial exchange at the NRA convention in Tennessee in 2015.”

…interesting how this keeps circling back to the NRA, isn’t it?

Some of this looks like it may be exaggerated to me, but most is accurate.

#JaredKushner was warned about Wendi Deng Murdoch
It is getting harder and harder to imagine a scenario where Jared Kushner avoids going to jail.

Why only rallies AGAINST Trump have to be held outside:#WomensMarch2018 pic.twitter.com/y2hgM51bAz

“I Don’t Know Where Else to Put This” Tweets

Men and death. It has that effect. As Ann German said, “WE know that.”

“I don’t know what black pudding is, but it obviously has its uses.” That’s true. It does have uses aside from breaking out of a freezer, none of which I’d recommend, including eating one!
(Via Ann German.)

I don’t know what black pudding is — but it obviously has its uses. https://t.co/F5duRfjSGa

We don’t have women’s march in Iran but we have brave women in Iran every Wednesday marching alone fighting compulsory hijab so we are their voices here in #WomensMarch2018 in the US#دختر_خیابان_انقلاب_کجاست pic.twitter.com/4EkgKdAHxc

“I’m sometimes asked when will there be enough women on the Supreme Court? And I say ‘When there are nine.’ People are shocked. But there’d been nine men, and nobody’s ever raised a question about that.” – Ruth Bader Ginsburg pic.twitter.com/pmTP51MtH6

I’ve been wondering when we would hear this (from the link in the tweet below):

Grandparents James and Betty Turpin have said they were shocked by the allegations, describing their son, daughter-in-law and grandchildren as a good Christian family who were “highly respected”.

“God called on” the couple to have as many children as they did, the grandparents added. …

They told ABC News that the children were given “very strict home-schooling” and they would memorise long passages of the Bible, with some striving to memorise it in its entirety.

And then there’s this:

Police then went to the home where they found “several children shackled to their beds with chains and padlocks in dark and foul-smelling surroundings”. …

Police said the parents “were unable to immediately provide a logical reason why their children were restrained in that manner”.

WTF? What logical reason could there EVER be to shackle children to their beds?

Couple who ‘starved 13 children’ had large family ‘because it was God’s calling’ https://t.co/cSzSjZyNsI

As Ann German said when she sent me this, “History repeating itself.”

Meet the many inhabitants that have occupied the Museum’s Hintze Hall over the last 100 years this #ThrowbackThursday https://t.co/5z7gnnHo7I

History will remember this man kindly.

Just want to raise everyone’s spirit in this depressed time that is #TrumpShutdown pic.twitter.com/ac3zmWjwP7 #AMJoy

Is this where the inspiration came from?
(Via Ann German.)

Happy Birthday, #BettyWhite! Thank you for being a friend! pic.twitter.com/slrceu03pQ

I’d love to go to Venice so much!

Another day where I’m proud to be a Kiwi. New Zealand is now a country that launches rockets. The other eleven are all big countries – US, Russia, China, India etc. Once again, we’re punching above our weight!

“Still Testing” is the name of the rocket.

Rocket Lab completed the Electron rocket test program with the launch of a second test flight, named ‘Still Testing’, from Launch Complex 1 at the Mahia Peninsula in New Zealand at 01:43UTC on Sunday, January 21, 2017 https://t.co/RffELHiBMQ pic.twitter.com/lufCvyaBOo

Jacinda Adern is our prime minister.

Huge congratulations to Peter & all the team at @RocketLab Making history and shoeing what’s possible right here in New Zealand, and doing it in such a kiwi way (who else would call the first test rocket ‘It’s a Test’ and the second one ‘Still Testing’)

She’s just announced she’s having a baby in June. She’ll take six weeks maternity leave, then her partner Clarke Gayford will be a stay-at-home dad. Those are Maori fish hooks carved from obsidian in the pic. They represent Clarke, Jacinda, and the baby.

We thought 2017 was a big year! This year we’ll join the many parents who wear two hats. I’ll be PM & a mum while Clarke will be “first man of fishing” & stay at home dad. There will be lots of questions (I can assure you we have a plan all ready to go!) but for now bring on 2018 pic.twitter.com/nowAYOhAbF

What a cutie!
(Via Ann German.)

One for Linda Calhoun!

“When I bestride him, I soar, I am a hawk: he trots the air; the earth sings when he touches it; the basest horn of his hoof is more musical than the pipe of Hermes.” – Dauphin, Henry V, Act 3, Scene 7.#ShakespeareSunday pic.twitter.com/Ob1NJuDO0P

Wolfdogs are beautiful, but they need special care. Don’t buy one from a breeder!

Wolfdogs technically shouldn’t even exist — but the ones who were rescued get to run around with their pack at this sanctuary ❤️ pic.twitter.com/1KhbLpZ9Bw

Very sad. New Zealand has a goal of being predator-free by 2050. Several offshore islands are already predator free, but it’s going to be difficult to achieve in the North and South Islands. Some are being defeatist and saying we shouldn’t try. That personally pisses me off. I believe we can do it, except for pets.

We feel your pain – it is heartbreaking to put a tx on a wee kiwi chick to monitor it and then to find a few days later that it has been predated by a stoat. The gruesome forensics involved… (Also the relief felt when you find a dropped transmitter and not a dead chick!) #RFPT pic.twitter.com/Fcjyrn4U2w

This swan is a bird-brain!

The ‘Return of the Swan’:
(last seen in the ‘Swan crash lands in sewage plant!’ episode.)#Nature #RatedSwan
–https://t.co/RSebzC1LAL

I can’t remember if I’ve put this up before. My apologies if I have, but it’s cool anyway.

How an egg becomes a baby penguin – Animals: The Inside Story – BBC https://t.co/px1tP2mixU via @YouTube

The most surprising thing about this is no one has done it before! (Cue: all the people providing proof I’m wrong!)
(Via Ann German.)

Ugg boots are making a comeback! This kitteh doesn’t mind!

Awe, so comfy in here pic.twitter.com/bRzf1lK7U0

Lizard sneaks up on kitten pic.twitter.com/rsAi9lY8L2