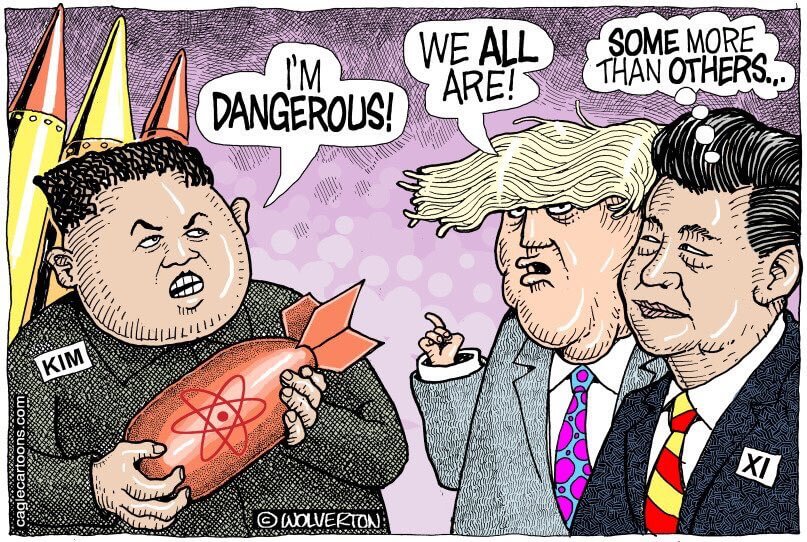 One of my recent tweets is a just-released Gallup poll. Since 2001, Gallup has asked USians an open-ended question about their country’s enemies. That question is, “What one country anywhere in the world do you consider to be the United States’ greatest enemy today?”

For the first time since asking this question, North Korea is at the top of the list. Not only is it at the top, but more than half of respondents chose it (51%). No other country has ever been that high. Previously, the highest result was 32% by Iran in 2012. Iran also came pretty close to that in 2006 with 31%.

Four countries dominate the US Enemies List. You can probably guess which ones they are. Along with North Korea and Iran, Russia and China are the countries USians most often see as enemies.

One of the things that strikes me about this is the effect of the media on public opinion. In recent months, negative stories about North Korea, especially in relation to their nukes, have dominated coverage. There’s been a lot of talk about Russia too, but not so much as an actual physical threat.

But when you think about it, Russia is a much greater threat to the US than North Korea. People worry that North Korea’s nukes can now reach the continental US. However, Russia has nukes that can reach the US too, and a lot more of them. The only real difference is that everyone has got used to Russia (and China) having nuclear weapons. Before China had nukes, many in the US were insistent that they should never get them and were sure that the first thing China would do was bomb the US. Throughout the Cold War, there was a real fear in both Russia and the US that nuclear war was imminent.

However, it never eventuated, and we know why. People in Russia and China aren’t really that different from the rest of us despite the impression given in the media. They don’t want nuclear war any more than anyone else does. The same goes for North Korea. The people of North Korea don’t want nuclear war, and Kim Jong un wants to retain power. The quickest way to lose his country, and probably his life, would be to start any kind of military conflict.

So, yes, it’s scary that yet another country his nuclear weapons. However, I don’t see President Kim as at all likely to use them. They make him feel safe from threats to his leadership from the US and China. And, quite frankly, I understand how he feels. 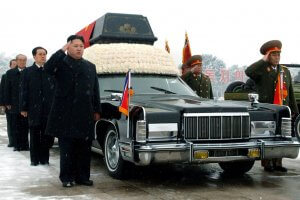 That’s not to say I support Kim in any way. He’s the epitome of the evil dictator. He’s all smiles in public photos, and behind the scenes he’s killed most of his family since coming to power. At the funeral of his father and predecessor, Kim Jong il, Kim Jong un and several other generals (Kim Jong un has multiple military designations) escorted the hearse in the funeral procession on foot. Every one of those generals, including the one standing behind him in this pic who was Kim’s uncle, has since been executed.

Then there are the at least 100,000 people in prison camps where they are routinely beaten, raped, tortured, and worked to death or otherwise killed. When a person defects, they do so with the knowledge that every member of their extended family will probably be sent to one of those camps. Thus there’s not even the excuse of committing a crime for the incarceration of these people (though no one should be subjected to such inhumane conditions whatever their crime, of course).

However, I digress. In my opinion, if any country is seen as an enemy to USians, the first pick should be Russia. The Russians are the reason the Syrian war is still ongoing and US troops are being killed and injured there. The Russians are the reason there is still fighting in the east of Ukraine, and I’ve no doubt special forces are involved there. Russian support of President Erdoğan in Turkey is the reason USians are still being killed and injured in Iraq.

Perhaps worst of all long term though is what Russia has done and is continuing to do to damage US democracy. They have worked on the already existing partisan divisions via a targeted media campaign that has been so successful that the distrust and even hatred between Republicans and Democrats is at an all time high. It’s years since a budget has been agreed to, very little legislation is making its way through at the federal level, and what does get through is poorly drafted and highly partisan. Conspiracy theorists are having a field day – even the president supports some of their cockamamie ideas. And I believe that the Russian interference is a big factor in why the US currently has a president who, even if you love him, you have to admit is not up to the job. If the presidency was an episode of The Apprentice, Trump would have been fired in his first week.

Even worse, apparently little is being done to stop the Russian interference. The attitude of Trump seems to be that admitting it’s a major issue is the same as admitting he was a part of it. (And if he thinks that, it actually makes it seem like he was colluding, not the other way ’round.) Further his attitude is that as Putin is on his side, it’s all okay. It would take too long to go through all the lies Trump is telling regarding Russia in the last few days via his weekend Tweet-storm. For that, I highly recommend this article from the Washington Post, which says it all: ‘Fact-checking Trump’s error-filled tweetstorm about the Russia investigation‘.

A majority of the federal government (both parties) recognizes that Russia is the biggest problem. One of the few things they’ve cooperated on was to vote for sanctions on Russia. The president refuses to implement them. Then, just today, he has the effrontery to put out this tweet:

I have been much tougher on Russia than Obama, just look at the facts. Total Fake News!

The annoying thing is how many people believe him.

One of the interesting things about the Gallup poll is how differently supporters of of the different parties cast their votes. Many Democrats did, in fact, recognize the danger of Russia. However, so few Republicans felt the same that their votes were nullified. Republicans have traditionally been the anti-Russia party, but that has changed with the Trump presidency. Now, with their leader in a Twitter battle with the leader of North Korea, they see that country as the greater threat.

There is one recent tweet by Trump that is accurate though:

If it was the GOAL of Russia to create discord, disruption and chaos within the U.S. then, with all of the Committee Hearings, Investigations and Party hatred, they have succeeded beyond their wildest dreams. They are laughing their asses off in Moscow. Get smart America!

This is what Putin wants. He wants Western-style democracy to look unstable, and therefore make Putin-style democracy appear more desirable to his people. And he’s succeeding. He’s hugely popular in Russia, and it’s unlikely that will change any time soon. Kim Jong un is also winning the ratings game at home. His own people love him like a god. Trump on the other hand, is not doing so well. Does he really want to rely on Russia to win him the next election?

I’m getting in on the act again today …

The reality of #CrookedTrump … he doesn’t care about the 30-40 people in his administration who can’t pass a background check because he’d never be able to pass one himself. pic.twitter.com/ZEKdpmqWCb

President Trump supports the gerrymandering of his party. Perhaps worse, should he be commenting on this while there could be more legal action? SCOTUS is already conservative, and he’s all but telling them how to vote!

Hope Republicans in the Great State of Pennsylvania challenge the new “pushed” Congressional Map, all the way to the Supreme Court, if necessary. Your Original was correct! Don’t let the Dems take elections away from you so that they can raise taxes & waste money!

Why won’t most Republicans criticize Trump?
(Via Ann German.)

How is it that President Bush paid a heavy price for Katrina but Trump is not paying any price for this? https://t.co/BGwEGDDffd

A couple of responses:

Because he’s not held accountable for anything by his party. Cannot recall a leader who so regularly willfully says he’s not responsible, it’s not his fault. Can someone point out a single time @POTUS stepped up and took responsibility for anything? #trump #sad

More gaslighting: once again Trump is attempting to change history. The problem is, there’s a solid third of the US who will believe his version. That’s dangerous for society as a whole as trust in democracy is being greatly eroded. That’s one thing Trump is right about – it’s just what Russia wants.
(Via Ann German.)

The link in the above tweet is to this one from Trump:

Russia started their anti-US campaign in 2014, long before I announced that I would run for President. The results of the election were not impacted. The Trump campaign did nothing wrong – no collusion!

Too often, this is what “Right to Carry” leads to …

Why do so many consider this an acceptable situation?

In the US too many seem to consider this an acceptable situation … pic.twitter.com/6hhkCbXQFE

What a wonderful gesture!
(Via Ann German.)

Thank you West Point. Grateful tears for Peter Wang, a hero of the #Parkland shooting.

Peter’s efforts show his great integrity and patriotism. His deep concern for others.

Remember him with honor. https://t.co/HMt78kaRnQ

West Point will provide the family of Marjory Stoneman Douglas shooting victim Peter Wang a letter of acceptance to West Point Class of 2025, which was his dream, and honorarium tokens. His funeral is today. pic.twitter.com/kOb9P5mjdd

Dinesh D’Souza is a disgraceful example of a human being.
(Via Ann German.)

Friendly reminder that most of the Parkland students will be able to vote in the 2020 election and Dinesh D’Souza will not because he is a convicted felon. pic.twitter.com/n34PqkwhHv

This is from Facebook (via Diana McPherson) but it shows the kind of revolting stuff that USians have to put up with.

You gotta wonder what the white supremacists are saying about this movie! I mean, what can they say? What exactly is there to complain about (although I do note that some idiots have found something).

The superpowers of the #BlackPanther … pic.twitter.com/PXTMlFYccb

This is a wonderful video! I highly recommend taking the time to watch.

Before we get onto the tweets, we’ve got a special treat today. Here are some of Linda Calhoun’s kids! Aren’t they cute?! 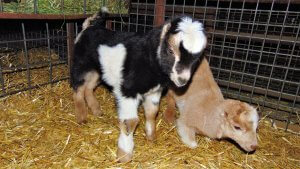 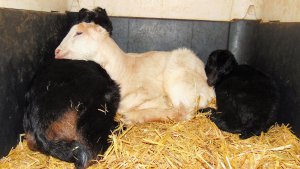 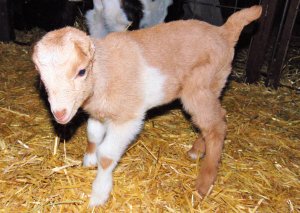 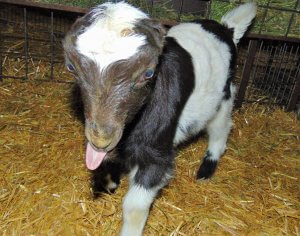 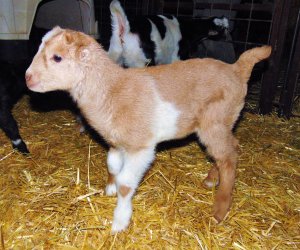 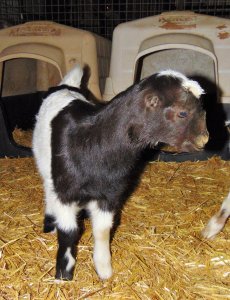 Excellent episode of WildWatch this month. There are all sorts of creatures, including a pair of swans who’ve been together nineteen years!

A fantastic project to reintroduce beavers to the UK.

This made my day pic.twitter.com/HMnyK1iWGm

Check out those puppies!

Look! What I Did. pic.twitter.com/FAJGqLFNSR

See mom, I told you there was a red dot! pic.twitter.com/sw85hi3C9Y

Happily sitting in the snow! I guess that’s what you do when you’re from Siberia!

I suspect it feels how I do right now!

He fell asleep in a tissue box pic.twitter.com/07zCg3YQ3d