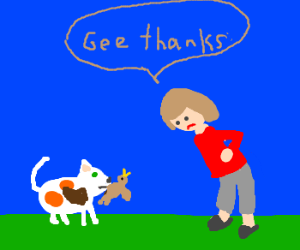 Hopefully, this is the last of these just-to-keep-things-ticking-over-with-some-tweets posts.

Last week, I had a Needs Assessment by an Occupational Therapist. As a result, I’m expecting a new chair within the next week or so.

Otherwise things are pretty much the same on the home front. “My cat” (really the neighbour’s cat who has chosen me as her daytime caregiver) spends more are more time here. I now have a policy of NOT letting her in before sunrise though. A week ago today, I got the delightful gift of a dead bird. I fed her about 6 am, then went out to the kitchen again about 6.30 to get a drink and found a rather big surprise. She’d eaten her breakfast, and brought me an effing blackbird for mine! 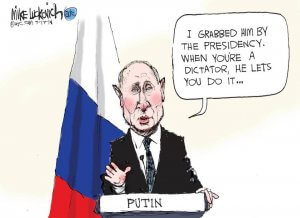 I doubt there’s a person with any awareness of the news who doesn’t know what the Traitor-in-Chief is up to these days. For months my spare moments were spent collecting small amounts of data for a post proving it’s not just many USians who disrespect him, but most of us in the rest of the world too. That post is now pretty much moot. Anyone who doubts that now is not part of reality.

Unbelievably, there is still a significant number in the US who do respect him. A CBS News poll told us on Thursday that 68% of Republicans approve of how Trump did at the Helsinki summit! Overall, the figure was only 32%, showing that Independents and Democrats are better judges of reality. The problem is, I think, that the political atmosphere in the US is now so bad, that party supporters can no longer admit when their leaders do badly. 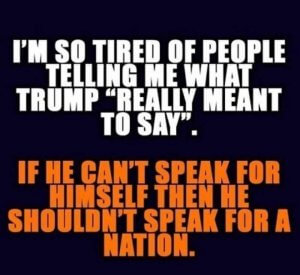 There was a lot more wrong with the press conference than just failing to stand up to Putin regarding Russia’s cyber warfare on the 2016 election. When Trump said more than a day later that he’d said “would” instead of “wouldn’t,” many Republicans said they’d take his word for it!

(Please don’t refer to what the Russians did and are doing in relation to the US elections as “meddling” either. Meddling is your mother not passing on a message from your boyfriend because she doesn’t like him. What Russia did was an attack on US democracy that more than likely resulted in the best qualified candidate for president for decades failing to win the election. Instead, you have an ignorant fool prepared to be a useful idiot to Putin.)

Another area where Putin beat Trump was leading the walk out to the podia and making the introductory statement. In that statement he spoke of the agenda the two had agreed on privately, which included no weapons in space (so much for Trump’s Space Force) and no US anti-missile batteries around the world. These are a bugbear of Russia – they don’t like the US putting them on the borders between Russia and NATO countries. Does this mean Trump made an agreement to get rid of them? The US military won’t let that happen of course, but it’s scary Trump may have agreed to that. 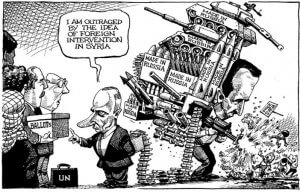 Putin had the cheek to mention Syria too. That country’s as bad as it is primarily because of Russian intervention. Yes, the US and Syria will need to get together on this issue, but to whitewash what Russia did there in the way Putin did was completely unacceptable. He actually had the gall to say he wants to help refugees! He has a moral responsibility to help those refugees since so many are in that situation because of him and the help he gave Syrian president Bashir al-Assad. 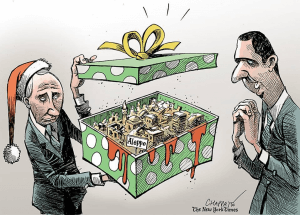 Putin also spoke of close cooperation between the US and Russian military in Syria. During the Obama administration, this was avoided because Russia could not be trusted to keep the information from the Assad regime. It sounds like Trump thinks he can trust Putin here too. Again, I trust the US military to persuade Trump this can’t happen and thereby prevent Trump fulfilling what it sounds like he told Russia he would do.

Helsinki was Fodder for Comedians and Tweets

There’s a lot more there of course, but there is extensive coverage everywhere in the media. Instead of me going on about it, here are some bits of fun. First up, Jonathan Pie’s take on the press conference.

Last, but definitely not least:

‘Men have been getting on my nerves lately.’ — Big mood from President Obama pic.twitter.com/lPq8IZjbl4

I’ve lost count of the number of times I’ve seen this clip in a tweet in the last few days. All I can say is, “It says it all.”

Trump creates his own reality. That’s not the problem. The problem is the tens of millions who buy into it. No wonder he doesn’t want to fix the education system and put someone like Betsy De Vos in charge of it.

Poor bastard has clearly been forced to apologize, despite his boss being the one who is in the wrong. If this was a rare thing, then he should be the one to apologize. In this case, the Republicans should be looking to do something about who’s president.

Director of National Intelligence Dan Coats said his “admittedly awkward response” to news of a possible White House visit by Putin “was in no way meant to be disrespectful or criticize the actions of the President.” https://t.co/P43xmgPsqX

A note about parliamentary democracies like New Zealand, Australia, Canada, and Great Britain. If any of our prime ministers put in a performance like that of Trump in Helsinki, there would be calls either for a resignation or a snap election. If the prime minister had a history like Trump, one or the other would occur. Under the US system, it’s like Trump is king. It’s all but impossible to get rid of an incompetent president.

Trump is dangerous combination of ignorant and irresponsible. It’s not the bank’s money. The money belongs to the country and to real people. Because of his trade war, people will lose their homes and livelihoods.

There are less and less mansplainers around, but unfortunately they still exist. Here’s how you know if you’re one:
(Via Ann German.)

For next time you need to help a man figure out whether he’s #mansplaining, @kimgoodwin has a handy flow chart. pic.twitter.com/tNP4wSoY7Q

Beautiful! I could watch this over and over.

This is not Photoshop or a mirror reflection: there’s really a house like this in Poland, Krzywy Domek https://t.co/0Rak6Fmvdt pic.twitter.com/lDdw2KNR2t

The Hekla urban quarter, designed by Wingårdhs Arkitekter, won the award Årets Stockholmsbyggnad (Stockholm Building of the Year) in 2010 pic.twitter.com/wV46BvGSlG

In case of emergency, throw out your giant penis and climb to safety. pic.twitter.com/YiCMzGiwCg

Anything that looks like this gives me the creeps! It’s kinda good to know this one isn’t top of the food chain.

The Yacaré caiman preys on fearsome fish like piranhas—but it’s not at the top of the food chain. It’s prey for other powerful predators such as jaguars and large snakes. Once heavily poached for its skin, the species is now protected & its population is rebounding. pic.twitter.com/YBjlv9OUr1

#kakapo Hakatere getting an almond treat after transmitter change. We use positive reinforcement where possible, and the minimum restraint necessary. #conservation #parrots #kakaporecovery pic.twitter.com/CZvqPjQkOf

I’ve never heard of the white-eared Catbird. Told you Twitter was good for something!

This dog was an only child and SO spoiled. Then one day he noticed something different about his mom, and realized he was going to be a big brother ????❤???? pic.twitter.com/6vD2oCy1j9

Another cute kid vs dog story.

A two year old and his best friend next door, the sweetest image to start off this new day ???????? Wishing you all a fabulous Friday and upcoming weekend full of happiness and smiles ???????? Love and hugs

What a cool kitten! (And a beautiful dog.)

And So We Win Again!

THAT’S IT! The #BlackFerns7s defend their #RWc7s title with a 29 – 0 win over France!! pic.twitter.com/MyTfiu5ag7

Haka: the @BlackFerns perform spine tingling Haka after winning the #RWC7s for a second time pic.twitter.com/o6k3kgUQxO