Trump’s Steel Tariffs Will Damage the US Economy 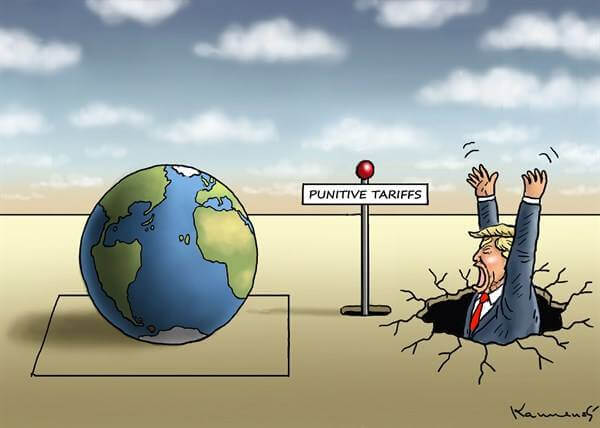 Last week President Trump announced that he was putting a 25% tariff on all imports of steel to the US, and 10% on all imports of aluminium. There would be no exceptions. The announcement was quite sudden, with virtually no consultation. Trump is making the move using what the Council on Foreign Relations describes as “a little-used 1962 trade law.”

His Chief Economic Advisor, Gary Cohn, threatened to resign over the issue. Like most in the Republican Party, he is a strong supporter of free trade. Today he made good on his threat. Many see this as bad news for the Trump Administration. CNN is quoting “a source close to the president” as saying Gary Cohn was, “the only good guy left.” They are questioning who is left to provide sound and frank advice to Trump.

Mick Mulvaney, head of Trump’s Office of Management and Budget (OMB) put out this tweet:

This is significant. Mulvaney is in ideological opposition to Cohn in many ways. He highlights the word “globalist” in his statement because to those who support the Trump economic agenda, that’s a pejorative. It’s not long since Cohn was spoken of as a possible successor to John Kelly as Chief of Staff after Kelly got it so wrong over the Rob Porter scandal. He’s seen as someone who will talk truth to power.

So what’s this all about, and what are the rights and wrongs of the situation? I’m a strong supporter of free trade. I oppose these tariffs. And in this case, almost all the facts are on my side of the argument. 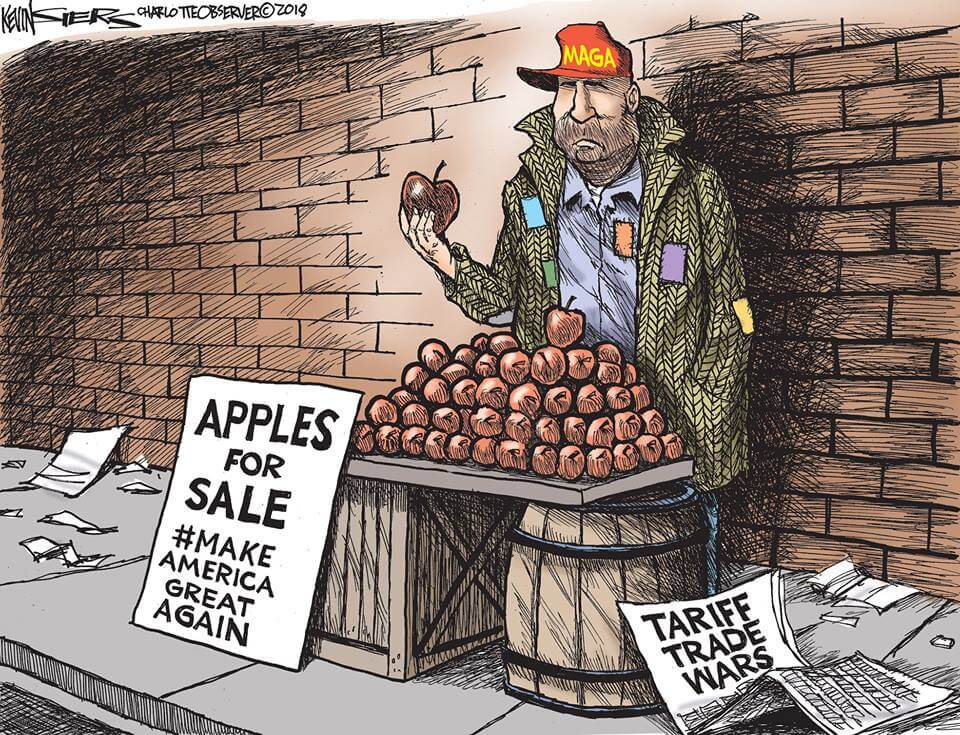 One bad apples screws up everything.

There are very few speaking up in support of Trump in relation to these tariffs even on his own side. There’s a good reason for that. They’re a really stupid idea.

The 1962 law that Trump is using so he can put these tariffs in himself without using Congress is military related. His argument is that the US needs a strong steel and aluminium industry within its borders so that in times of war, they have access to all the steel and aluminium they need to sustain the military. Because of the shrinking of the US industry over the last thirty years there’s less steel being produced. This, he says, is a security issue.

Further, the main reason the US industry was damaged in the past was because China was flooding the world market with cheaply produced steel. (It wasn’t just China, but they were the worst offender.) The US couldn’t afford to compete, and many companies closed down. 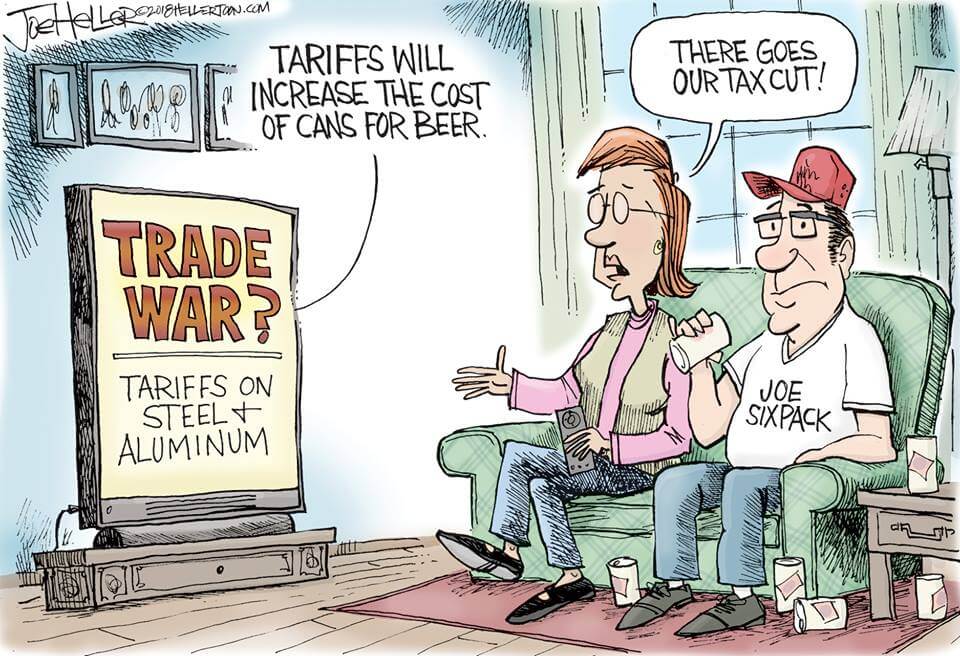 For a start, there are only about 140,000 people working in the US steel industry. The argument is that they supported other workers. However, if the US steel industry closed, those who require steel would just buy from cheaper offshore providers. All those manufacturers that use steel, which employ millions, would save money. They could do a range of things with that extra money including reduce prices, invest more, increase wages, hire more people etc. All those things would be likely to increase employment. And, as so many more people work in steel-using industries, the increase would probably be more than the reduction in the steel industry.

The security argument is a valid one on its face, and it seems to be one that Trump finds convincing.

But again, unless the US goes to war with Canada, Mexico, Brazil, South Korea, and several others of its closest allies, it’s not likely to have a problem getting steel.

This is where the US got most of it’s steel imports from in 2016: 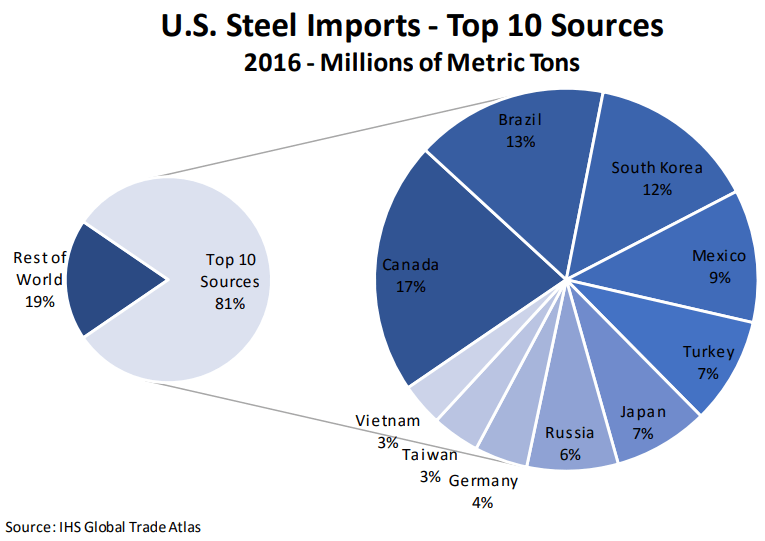 China doesn’t even feature in the top ten, though that’s apparently the country Trump is trying to get at the most through this move. (Around 1.9% of US steel imports were from China in 2016.) But even if this is really an anti-China move, it’s not really necessary.

The World Trade Organisation (WTO) already has twelve anti-dumping regulations (ADs) and eight counter-veiling duties (CVDs) in place against China – more than any other country by far. These apply internationally. The most ADs and CVDs that any other country has against it in relation to steel is eleven. (See page 7 of this pdf for more info.) The US has none. It’s thus not as if there’s no action against Trump’s favourite economic whipping boy. And if he doesn’t think these measures are enough to stop China’s unfair trade practices, he can take a case to the WTO to try for more.

Back in 2002 the steel industry persuaded George W Bush to institute a 30% tariff on some steel imports (not all like Trump is proposing) for three years. They were rescinded within a year due to WTO complaints against the US as well as negative economic consequences at home. Those consequences included huge job losses and business closures amongst those that use steel. Senator Lamar Alexandar (Rep-Tennessee) pointed this out to the president (from this Cato Industry report):

“The effect was it raised the price of almost all steel in the United States,” leading to job losses in the auto-parts sector and among other manufacturers, Alexander said. “There are ten times as many people in the steel-using industry than steel-making.”

Trump apparently acknowledged this, but said they, “worked for others.” [He means other presidents.] 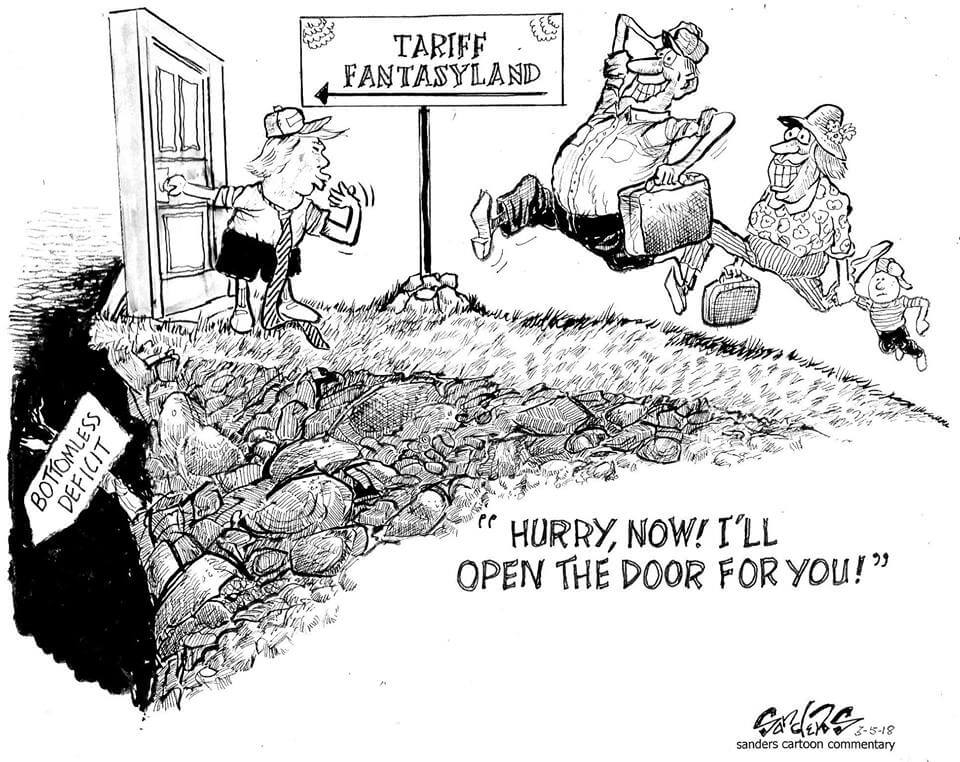 … the President is sorely mistaken to assume that other instances of US steel protectionism turned out much better. Indeed, as I wrote in my 2017 paper on the historical failures of American protectionism, the US steel industry has for decades gone to the government trough for new restrictions on its foreign competition, and the results [of] these import measures are always the same: immense consumer costs and very few, if any benefits to the industry and its workers.

For example, multiple academic studies in the 1980s showed that efforts to restrict imports of various steel products annually cost American consumers between $200,000 and $2.3 million (2017 Dollars) for every US steel industry job protected: 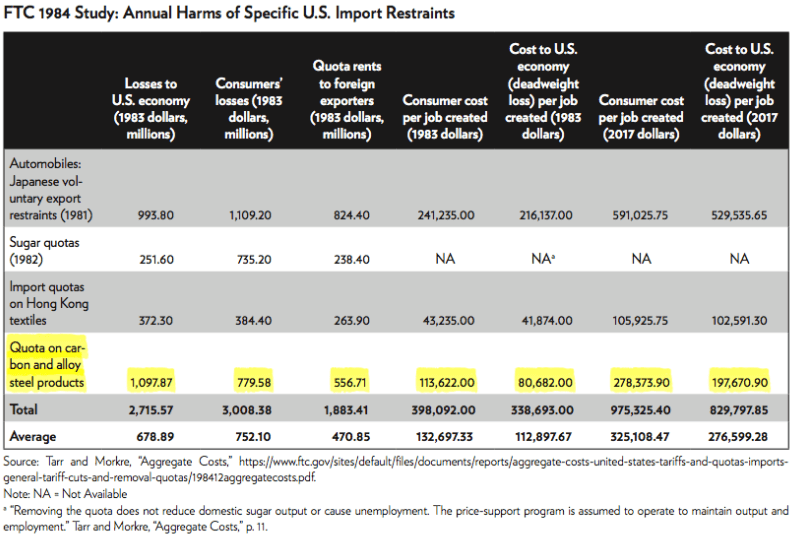 (There are more tables at the link.)

Linicome further writes that even though past protections have led to an increase in profits in the industries with tariff protections, none of those increases was enough to revive that industry. In fact, even the existing companies did not expand beyond their current capacity even when there was plenty of capital available to do that. In other words, business owners kept the extra profit for themselves. Another study even found that the government protection actually prevented companies from making necessary improvements. Therefore, there was pain for the consumers for no security gain.

Still, Trump seems determined to institute these tariffs. According to Vox, at a press conference today he made the ridiculous comment that they would be introduced in a “very loving way.”

But it doesn’t matter how loving the introduction is: there is likely to be the potential for an international trade war. The European Union has already said they will retaliate if the tariffs become law. They indicate they would put a tariff on jeans, Kentucky bourbon (made in Mitch McConnell’s home state), and Harley Davidson motorcycles (mostly assembled in Wisconsin, Paul Ryan’s home state).

Swedish Prime Minister Stefan Löfven (Sweden is a member of the EU) said at the same press conference:

Swedish prosperity is based on corporation competitiveness and free trade, and I’m convinced that increased tariffs will hurt us all in the long run.

… he added that he supported the European Union’s efforts to raise as few obstacles as possible in global trade. 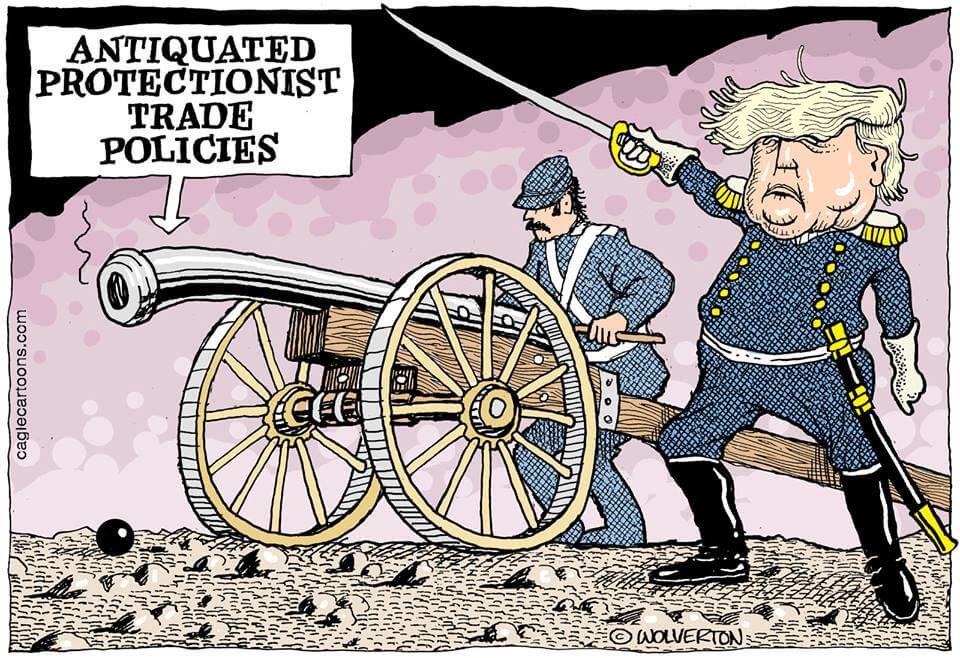 Trump’s response was that if the EU retaliates he will put tariffs on European vehicles. Thus, we’ll have a trade war. Each side will be trying to make the other side back down, and neither will want to admit failure.

Then will come multiple expensive and drawn out rounds of arbitration, and it will take months or years before the situation is sorted out. In the meantime, consumers will continue to suffer.

Trump thinks trade wars are easy to win. They are not. In trade wars, everybody loses, especially the consumer. And amongst consumers, it is the poor and middle class that suffer the most.

When a country (USA) is losing many billions of dollars on trade with virtually every country it does business with, trade wars are good, and easy to win. Example, when we are down $100 billion with a certain country and they get cute, don’t trade anymore-we win big. It’s easy!

Admittedly, the steel and aluminium industries are happy with the Trump proposal. They will profit from this, as they always have in the past. The value of the shares of almost all such companies rose on the news. However, almost every other industry feels differently, and the overall value of the stock market fell. (The first bar shows the overall Standard and Poors decrease at the same time as steel industry shares rose.) 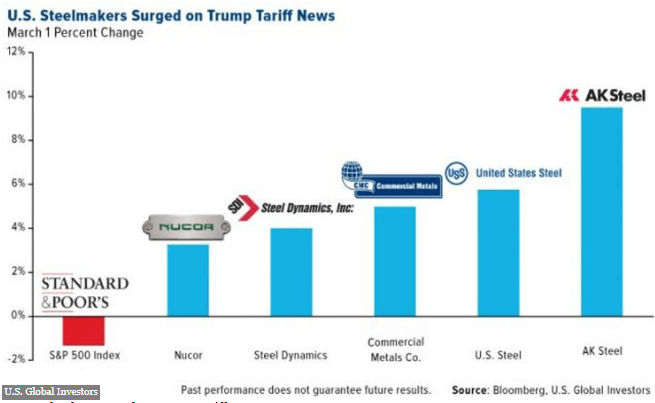 Other companies aren’t happy. This was a more typical response:

Like most brewers, we are selling an increasing amount of our beers in aluminum cans, and this action will cause aluminum prices to rise. It is likely to lead to job losses across the beer industry. (2/3)

We buy as much domestic can sheet aluminum as is available, however, there simply isn’t enough supply to satisfy the demands of American beverage makers like us. American workers and American consumers will suffer as a result of
this misguided tariff. (3/3)

MillerCoors have, of course, had push back from Trump supporters who don’t believe this will make a difference. People who think that if the CEO took a pay cut, that would mean prices won’t go up. (That wouldn’t make enough of a difference.) And the SJWs who think all beer drinkers are addicts so they’ll buy the same amount whatever the price. (That actually isn’t true – not all beer drinkers are alcoholics!) But, like most with no knowledge of economics, they have a very simplistic view of how a business is run.

Vox has a compilation of statements from various industries including US car dealers, vehicle manufacturers, boat builders, the beer industry, various retailers, machinery manufacturers, and other businesses plus Business Roundtable. All think the tariffs will be damaging to the US economy.

To be clear, this is a huge deal, with serious inflationary implications. The U.S. is the world’s largest steel importer, so it’s very possible we could see retaliation from multiple trading partners on exports ranging from Florida orange juice to Kentucky bourbon to Wisconsin cheese. It’s hard to imagine a scenario where this is not passed on to consumers. 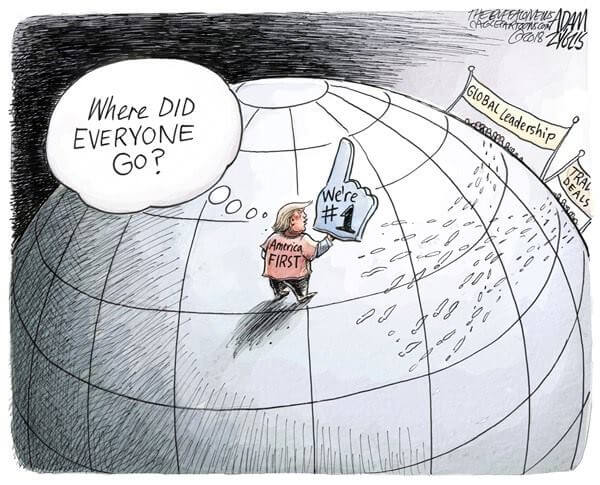 The president, as always ties things back to trade deficits. (See his tweet above, for example.) These are actually all but irrelevant to the economic argument. Besides, as Holmes points out, the country the US has the biggest trade deficit with is China. As we’ve already seen, only a tiny proportion of the steel the US imports comes from China.

These tariffs are not a good idea, and it is almost certain that they will do significant damage to the US economy. It is also likely they will have a big effect on parts of the rest of the world, even if a trade war doesn’t ensue. Canada, for example, may only account for 17% of US steel imports, but they are over half of Canada’s steel exports. The US will thus be hurting one of its closest and most reliable allies.

Somebody needs to find a way for Trump to back down from this before any damage is done.