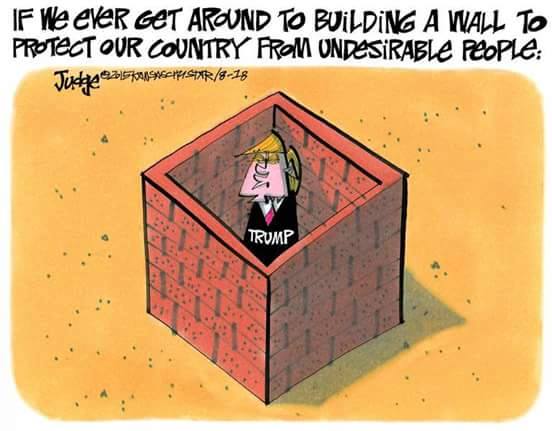 This Twitter thread from “@Stonekettle” was brought to my attention by reader Ann German. It’s the best thing I’ve ever seen about Trump’s insistence that the US requires a southern border wall. It’s better than anything I could write about the situation and covers just about everything in relation to the actual wall. For that reason, I’m going to produce the whole thread below. This is a pretty lazy way to do a post, but I think you’ll agree that this thread is worth it.

Although it’s on Twitter, I suspect that even if Trump sees it, it might be too long for his attention span. However, I live in hope. But even then there’s the issue of him admitting he was wrong. That simply doesn’t happen. Every now and then it seems Trump may be about to see reason. The tweet about the steel slat wall was one such time. Then he faces questions from journalists and he’s back to insisting that a wall is the only solution.

(The flush left comments that are not part of tweets are mine.)

Let’s say we build this wall.

Let’s say we give Trump the money and we build a wall 30 feet tall, 2000 miles long. Doesn’t matter how, doesn’t matter what it costs, don’t worry about the details.

No. No. Don’t roll your eyes. It’s not a trap. This isn’t me doing that thing where I seem to ask a provocatively obnoxious question, but I’m REALLY fishing for something else entirely. Nope. Not that.

Now, bear with me here:

The US/Mexico border is 1954 miles long. Currently, about 700 miles is fenced in some fashion.

Well, because most of the border is remote, away from urban development, in rugged territory, deserts, etc.

Now, people being people, it won’t matter how high the wall is, or how thick, or whatever passive systems (such as spikes or concertina wire, etc) you include. Given enough time and resources, human ingenuity will find a way over, under, or through your wall in short order.

Particularly in remote areas, outside of full time observation.

You don’t need to take my word for this, you can research the effectiveness of such barriers from the Great Wall of China to the Berlin Wall, from Hadrian’s Wall to the West Bank Barrier.

Trump and the West Bank Wall

Amongst Trump’s base of Evangelical Christians there is a deep religious fervour in relation to Israel. That’s not because of any admiration for Jews or aversion to anti-Semitism of course. It’s because of their belief in eschatology (End Times mythology). In particular, it’s the belief in the prophesized Battle of Armageddon before the Second Coming of Jesus Christ. (Armageddon is at the foot of Mt Megiddo in Israel.) Possibly because of his relationship with the Evangelicals, Trump has begun referring to the Israeli-Palestinian wall as an example of one that works. That’s why it features in the thread.

Oh, right. The West Bank Barrier, the wall which divides Israel from Palestine. It WORKS, you say.

The cost to Israel (and Palestine) is high. It works. It keeps people penned up, apart. As it was designed to do and a number of American conservatives look to the Israeli model as an example.

The American version would have to be 3 times as long and even more expensive.

That barrier was designed, rightly or wrongly, to separate nations and people at WAR.

And the ONLY way a such a barrier works is with constant monitoring, constant patrolling. Because otherwise, as I mentioned up above, all you need to defeat it is a ladder and some time.

This is true of the West Bank Barrier. And it was true of Hadrian’s Wall. And the Great Wall of China. The Maginot Line, the Berlin Wall, Saddam’s line. They ALL had to be monitored and patrolled. Or they were no more an impediment to migration than any natural barrier.

Up above, I mentioned the Maginot Line.

The French spent enormous resources to fortify their border. But once in place, those resources were fixed. They could not move or be used elsewhere.

When the Nazis did a rapid end run around the fortifications…

… all the enormous resources of the Line were immediately rendered moot, left behind in their fixed, immobile positions.

By its very nature, a wall is fixed in position. Meaning, the defenses and resources of a wall are only useful AT THE WALL.

Walls are good for small, limited, controlled areas where the wall is part of a larger system, and continuously monitored, protected, and maintained. Where those manning the wall have a SIGNIFICANT advantage over those the wall is designed to control.

For Trump’s wall, 2000 miles long, to work, you will HAVE to monitor it in real-time along every inch. You will have to install cameras and sensors, fly drones and aircraft, and put out daily patrols.

Any unattended section, any blind spot will be found, and exploited.

The people of the US and Central America are not at war.

Those seeking refuge in the US are unlikely to storm the border with a Blitzkrieg of tanks — and if they were, WE WOULDN’T BUILD A WALL ANYWAY because the US military doesn’t fight from fixed positions.

Those who build walls in the desert often die on them. As Saddam’s army learned — or didn’t actually, given how the second war with the US went.

Again, walls are useful for certain limited applications. But they are utterly impractical over thousands of miles. Your assets become fixed, inflexible, unable to adapt, and if bypassed they’re useless.

You will NEVER get a return on your investment.

1. If you have to have eyes on the border ANYWAY

2. if you have to patrol the entire length in real time ANYWAY

3. if you have to monitor the cameras and sensors and drones ANYWAY

4. if you have to counter any breach anywhere anytime ANYWAY

THEN YOU DON’T NEED A PHYSICAL WALL.

For a wall to work, to DO what Trump promises, it CAN’T be a simple barrier.

It would have to be a complex system of technology and human beings where the physical wall itself is the LEAST part, its defenses fixed and inflexible, unable to adapt to changing circumstance.

Once you implement the supporting systems and personnel you need to secure the wall, YOU NO LONGER NEED THE WALL.

And without a wall, those systems become much more flexible, mobile, unpredictable, and adaptable.

History, our own military strategy, and our national security policies learned over two painful centuries, demonstrate just how useless and ill advised a fixed defense is.

A simple wall is a simple solution for simple minds and worthless for anything else.

Two days later there were these additions.

THAT, right there, is the joker in the deck.

People still get in. https://t.co/ZNZCmaLVLy

People still get in. Because they will.

They’ll go over your wall, under it, through it. To justify the money you spent, you’ll have to spend MORE. More security people, more technology, more concrete, more barbed wire, more guns, more land.

And people will STILL get in.

People will still get in.

They’ll go around your wall, risking their lives on the ocean. So you’ll have to patrol that, in force. You’ll have to guard the coast, walk the beaches on foot, put up air patrols, more technology, build more walls.

And still, they’ll get in.

Even if they don’t, you’ll THINK that they are. They’re STILL getting in, you’ll believe.

Those who profit from fear need somebody to blame.

It’s the easiest form of power, the simplest way to manipulate the rudest of minds. THEM. THEY’RE getting in. THEY’RE taking your jobs, raping, murdering, stealing YOUR democracy. THEM.

We gotta do more.

We gotta be safe.

You built the walls, you patrol the beaches and the skies. But it’s not enough, those in power tell you.

THEY are still getting in. THEY are here. Oh yes THEY are. Who else would be causing these problems?

We gotta do more.

We gotta be SAFE.

We gotta do MORE.

We’ve done everything to keep them out, but they’re still HERE. So, we need some way to identify who belongs and who doesn’t.

That’s how this goes.

Listen to me: You start building walls, you’re building your own prison.

The Politics of Fear

Those who profit from fear need somebody to blame.

It’s the easiest form of power, the simplest way to manipulate the rudest of minds. THEM. THEY’RE getting in. THEY’RE taking your jobs, raping, murdering, stealing YOUR democracy.

This is an extremely significant part of the whole strategy. We know that the whole “Build a Wall” chant was little more than a campaign strategy to get the crowds going. Even Trump got a surprise at how well it worked, and that was the main reason he kept it going.

Psychologically, the need for control is a big part of what makes a conservative. That is why it’s so often possible to play on fear of the other to get conservative votes. Statistically, there is little chance of someone in the US suffering because of an attack by an extremist Muslim. By comparison, they actually have far more to fear from an extremist Christian. However, many conservatives simply refuse to believe the statistics that tell them that. My point is, that’s why Trump’s ploy of making those trying to get into the US via the southern border something to fear is working.

Border security is important. But policy should be informed by data, not emotion, especially when the emotion comes from someone who appears to be emotionally unstable. 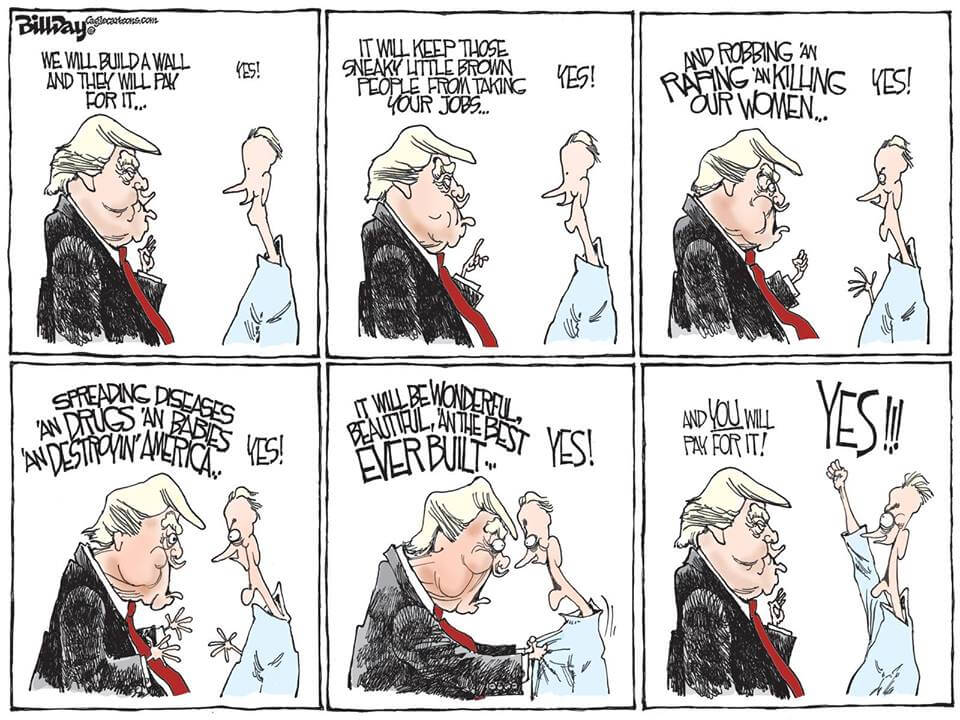 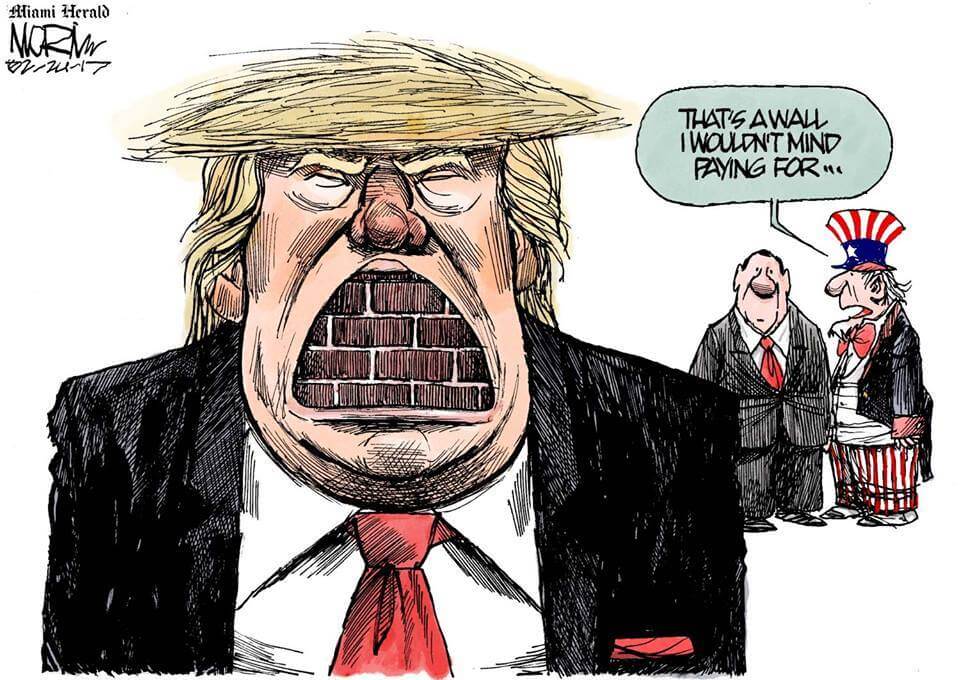